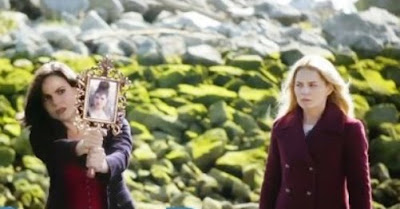 Tonight we begin in the loft apartment, and Emma and Regina are chewing the scenery looking for a way to defeat the Evil Queen. Snow writes Charming a note and prepares to wake him, but first she gets a feeling crawling up her spine that says the queen is watching. She smashes the mirror by the bed, furious at this new intrusion into their lives.

Next we watch a love story, one that takes place in the moments between dark and dawn, as Snow and David swap shifts with their baby. They leave each other notes and videos to watch, trying desperately to keep their bond with each other. Oh, the feels in this segment - it's like watching them fall in love all over again. This was beautifully done in split screen with the song "Colours" by Donovan underscoring. Nice touch. 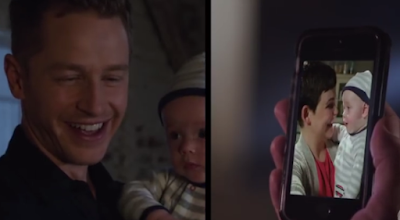 And oh, am I glad to see Sleeveless Charming. Second only to Dark Charming on the hotmeter. Damn. Can't the dude sleep in just boxers? Is it too much to ask?


Now we head over to the vault, as Regina and Emma put their heads together. Emma has tried to track down The Dragon in New York, in the hope that he might know how to break the new sleeping curse on her parents. Regina, inspired by Snow, suggests that maybe they can trap the Evil Queen in the world behind the mirror, as she once trapped Sidney.

Unfortunately, this involves using Henry as bait. Emma isn't thrilled with that idea, but Henry has nothing better to do since Violet (oh, remember her? I thought she was gone) has stood him up for his second 'John Hughes movie night' and is sure to be a disappointment for tonight's Homecoming dance. He might as well face some imminent jeopardy again.

So Henry meets the Evil Queen at the beach, drawing her out and then getting poofed away to safety. But Regina and Emma's plan to trap her backfires as she pulls her own mirror and traps Emma and Regina on the other side. Then she cracks the mirror to keep them good and trapped.

Emma wakes up in a classic Star Trek set full of mirrors, all of whom show her someone different in Storybrooke. Unfortunately, none of them can see her. Regina shows up to let her know the situation is pretty much hopeless, and their magic won't work there. After angsting about it for a bit, she finally decides Henry is their way out.

Back home, the Evil Queen transforms herself into Regina (a nice little effect done via shadow) and shows up to tell Henry that the plan worked. She tells Killian Emma is fine and even left him a voicemail that he somehow didn't notice before, and then with an evil gleam in her eye, she tells Henry it's time to get ready for his dance.

Across town, Belle goes to Gold's and is alarmed to see that he's closed the shop - while still inside. This means he's surely up to no good, so she asks Zelena for help to make a portal that will get them out of Storybrooke and back to the Enchanted Forest.

Belle then asks Aladdin to help them by stealing the sorcerer's wand - the one that created the portal to Camelot last season. Aladdin initially balks but Belle talks him around to it, just like she talked Zelena into helping her when the woman barely knew her name until a couple of weeks ago. Belle is just winning over the masses lately, isn't she? Maybe she should run for mayor. Give the establishment a big middle finger! Silly me. What am I talking about?

The Evil Queen shows up at Rumple's and he appears to be fixing his spinning wheel. It turns out she wants the hammer of Hephaestus, a tool that is immensely useful to those who have no magic. And for some reason, she wants to give it to Henry.

She's hoping the hammer will somehow allow her to forge a new beginning with her child. Gold gives her the hammer, and in return, she offers to be 'on his team' for whatever the hell that means. He cautions her to remember what Cora taught her: "Love is weakness." "Love can be weakness," she agrees, "But it can also be a weapon."

Back out on the beach, Killian is calling Emma because he realizes something doesn't feel right. He finds pieces of the broken mirror and then he finds Emma's phone in the sand, just before the Evil Queen shows up and blasts him into another closed head injury. Phew! Glad to see they knocked him around again - he's got a quota to make, after all. Here, amuse yourself with this hilarious montage:


Back on the other side of the mirror, Emma and Regina have had enough of seeing semi-naked dwarves go about their daily hygiene rituals. Luckily, they remember that Henry is taking Violet to Granny's before the dance, so they head over to that mirror and manage to make it bounce a little as Henry's looking at himself.

They're not quick enough, though - the Evil Queen (disguised as Regina) shows up to pull his attention away, and Henry confides in her that he doesn't think he's good enough for Violet. Evil Queen/Regina reminds him that he's royalty and Violet is just a commoner. That alone should have set off the warning bells, but it isn't until she reminds Henry about his posture that Henry realizes she's not his mom.

Henry immediately enlists Violet's help in getting away, and Violet comes up with a reason for them to leave, telling Henry she hates her dress and they have to go.

Across town, Aladdin sneaks into Gold's and steals the wand as Rumple spins golden thread in the back room. Jasmine is proud of Aladdin for stealing for a good cause, and calls him a hero. He also stole back his lamp - which is without a genie - but it's possible whatever is inside it can help them find Agrabah.

Back in the mirror realm, Emma and Regina discover that they aren't alone - in strolls The Dragon, having been banished there by the Evil Queen after she took his heart. "Everything is about balance," he tells them, "The dark and the light" (Remember that folks - I have a feeling it's the great moral of this story arc). He also tells them he once lost a daughter - called it! I knew he was Lilly's father! I knew it!

The Dragon takes Emma and Regina to Sidney's old house. He's unable break the curse on Snow and Charming, but Sidney was working on a portal and The Dragon thinks if they all work on it together they can get the broken mirror repaired and get home.

Over in Storybrooke, the Evil Queen catches Henry trying to talk to the mirror in her vault. She reminds Henry of all the times she forced him to stop being a crybaby as a child, reiterating her desire to make him strong.

Well, that's the second Star Wars reference this season. How long until we have Muppets? They're owned by Disney, too. Maybe they could have their own realm, and all the characters could transform into Muppets when they go there. I'd love a Muppet episode. Just sayin'.

The Evil Queen is having none of Henry's wishy-washy Hero nonsense. She pulls out The Dragon's heart and talks through it, using his heart to turn him into an honest-to-goodness CGI dragon that looks pretty damn good.

The Evil Queen then hands Henry the hammer of Hephaestus, giving him a chance to smash the dragon's heart and save both of his mothers, but at a terrible cost: The dragon is innocent, and killing him will darken Henry's heart.

On the other side of the mirror, Regina comes up with a plan to get The Dragon's fire aimed at the mirror. Emma and Regina fight over who could be the better martyr and finally decide to work together. As the dragon lets loose, Henry hits the mirror with the hammer. Emma and Regina tumble through as Henry grabs the dragon's heart.

The Evil Queen sneers at them all, telling Emma and Regina they've made Henry 'soft.' Henry steps forward, puffs up that young hero chest and tells her he's strong because family makes you stronger, and then he twists the blade by reminding her that she's going to die bitter and alone. Before she can retaliate, Killian suddenly appears out of nowhere to stick a hook in her neck and she poofs away.

Yay. Hot guy does hero stuff after the women already had it under control! Love ya, Killian, but really, now.

Back at Zelena's farmhouse, Rumple shows up and steals the wand right out of Zelena's hand just as she's about to open the portal. Then he puts a magical gold cuff on Belle's wrist that will enable him to find her no matter where she goes, ensuring that she can never escape him or take his child from him.

Damn, Rumple. At least pop a few Tic-Tacs before asserting your male authority over the vessel carrying your seed.

For her help in aiding Belle, Rumple tries to choke Zelena for good measure only to have it all go wrong as he grabs his chest and sinks to the floor. Zelena reminds him of the deal they made back in the New York hospital: He can't hurt Zelena without having it backfire on him now.

Across town at the apartment, Snow prepares to wake David, but doesn't have the heart for any more love notes. He awakens and finds a crumpled, blank piece of paper, realizing the toll this is taking on the both of them.

Over at a dark and deserted Granny's, Violet shows up, much to Henry's surprise. She confesses that she's been so distant because like any girl in a bad 80's teen movie, she's having a hard time adjusting to school. Is she a geek? A jock? "You don't need a label," Henry tells her and he asks her to dance.

As Emma and Regina look in through the window, they share a beautiful bestmomfriends moment.

"I was so worried about how I was going to raise him," Regina says, "I didn't even notice..."

"That we already had," Emma finishes.

And we end tonight with the Evil Queen and Rumple again.

"How far are you willing to go to get this new beginning?" he asks, and then he plants one on her. He assures her that they're on the same team - for now - and he's willing to help her if she can do the one thing he cannot: kill Zelena.

I'm giving this one four storybooks out of five.

Not as thrilling as the previous episodes, and more than a little cheesy in spots. Still, we got sleeveless Charming, Hero Henry, and the answer to the question about Lilly's parentage. I'm interested in seeing where they go with that.


What did you think? Were you surprised by The Dragon's revelation? And what do you think is Zelena's angle in all of this?