It took three trains and 5 hours to get to Newark International Airport (due to wait times between trains and my commute to the train station), and once I got there, I breezed right in. I was expecting a huge wait in security lines, but most people traveling on the day before Thanksgiving are doing so domestically, so the International terminal didn't have much going on.

They also didn't have much in the way of food once you got past the security checkpoint. There was one bar/restaurant with about ten things on the menu, and the cheapest meal was a hamburger that rang in at $24.50. And the fries were extra!

Yeesh. So I ordered an $8.50 side of fries and reasoned that would hold me over as a meal until I got on the plane.


Aer Lingus did a rocking good job once I was aboard (and wow - that was the biggest damn plane I've ever flown on). Dinner was Chicken Provençal with a fresh caprese salad, and I got to watch the movie Me Before You which wasn't as much of a tearjerker as I thought it would be mostly because the whole thing just seemed too predictable. Redbox that before you buy it. Seriously.

We landed half an hour ahead of schedule, which probably made some people happy but sucked for me because I bought a visitor pass for the hop-on-hop-off bus online and had to wait for the bus counter at the airport to open up before I could get it. So we arrived at 4:30am and I had to hang around the airport until 8am.

I found a cozy table, did some blogging and some posting and drank my itty bitty Diet Coke. I say that because they come in 16oz bottles instead of 20oz like we're used to in the US, so they look weirdly skinny.

Once I got my pass, and my 3 day Leap visitor card (good on all buses, trams and trains in Dublin) I was on my way to the suburb of Tallaght, and the Glashaus Hotel. 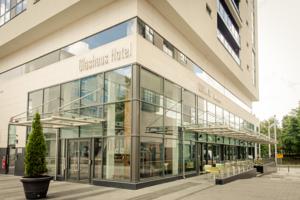 I chose Glashaus because it was right next to the LUAS (tram), and being west of the city, the rate was really good. The tram stopped literally in front of the hotel, and there was a shopping mall with a movie theater and Tesco grocery store just across the road. If you're a budget traveler, I wholeheartedly recommend this hotel - they couldn't have been nicer and the hotel was clean and comfortable (and $150 cheaper overall than staying closer in).

The trade off was a 30 minute tram ride to city center, but I didn't mind. I was people watching and scenery watching and it was all good. Once I'd had a shower and a nap, I made my way to the tourist Mecca of Dublin: Temple Bar. The tram doesn't go there directly, I had to take a bus from one of the stops, but that was easily figured out because I downloaded the Dublin Bus Journey Planner app. Just plug in where you are and where you want to go, and it'll show you the buses or trams you need to take to get you there. So easy!

Being a Thursday night in the off-season, Temple Bar wasn't a rollicking river of revelry like its reputation paints it to be, but there were a lot of people there and everyone was having fun.

Let me pause here and say that I have never, ever been to a friendlier place in my life. Everyone I interacted with was warm and wonderful and full of humor. I eventually tucked into a hearty meal of fish and chips with "mushy peas."

Then I wandered over to The Gutter Bookstore, so named for a famous Oscar Wilde quote, which graces the mug I'll be drinking my tea from. 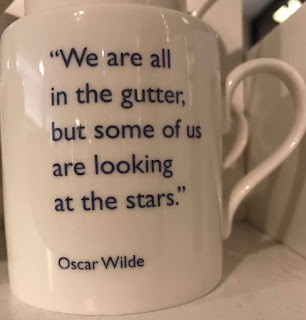 I also happened upon a book club and they invited me to join in, asking me about my upcoming book launch. Made me feel all author-like!

From there, I stumbled (and I do mean stumbled - their hard cider is lethal) upon the official lighting of the Christmas tree at Temple Bar, complete with traditional Irish street musicians, mince pies and free mulled wine (courtesy of The Queen of Tarts) that was hands-down the best mulled wine I've ever tasted. The crowd was merry and the music was grand and oh, it was just lovely. Really just lovely. 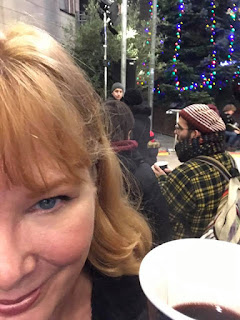 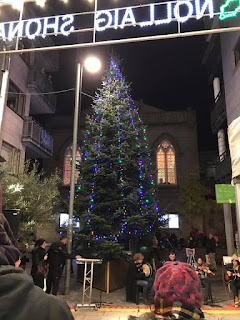 After that, I finally sat down in a pub - can't remember the name - and had my first ever pint of Guinness. Yes, you read that right. And actually, it was a glass of Guinness (I don't care for beer, so I stayed small) because I was in Ireland and I had to have my first Guinness in Ireland. And I'm sure it was delicious. If you like beer. Which I don't. I finished it all because I was sure they'd throw me out of Ireland if I poured out a Guinness.

Then I headed back out to the streets and wandered around for the next couple of hours, buying some small souvenirs and a bag of cheese and onion Tayto crisps that are now my favorite addiction. I passed the Gaiety School of Acting, known for famous alumni like Colin Farrell, Olivia Wilde and Colin O'Donoghue. I was hoping they had a performance going but they were dark that night. I strolled along the quays by the river Liffey and captured a gorgeous shot of the Ha'Penny Bridge at sunset. 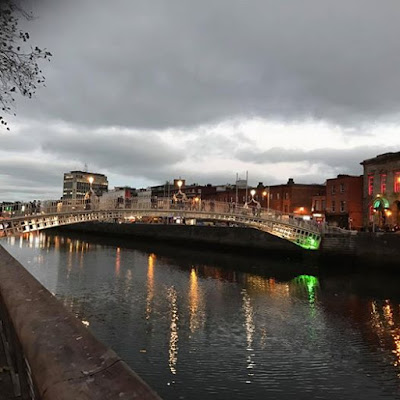 I found my way to the tram by fuzzily following the rails in the street until I got to a stop, and luckily, it was going the way I needed to go. I got back to the hotel a little footsore, but happier than I've been in a really long time. What a great first day!


Just a few little odds & ends:
Day two takes me to a castle and the rocky coast overlooking the Irish sea - stay tuned!