Our Legal System Is A Pain In The Ass 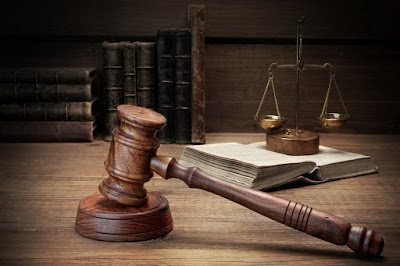 I spent the morning in court.

I've been embroiled in a "situation" for about three months now, and today I had to take a day off of work to drive to the county courthouse, wait two hours, and get an extension on the extension that I got before.

This is a civil case, by the way - nothing criminal going on. It involves the non-payment of a traffic citation for expired emission and inspection stickers that I didn't know was still unpaid. It's a long, convoluted story that involves a local magisterial court dropping the ball on mailing part of the citation and me not following up when I made payments to be sure they'd all been received and the gist of it all is the state decided to suspend my driver's license - something that has never happened to me ever before.

I filed an appeal against that, got my privileges restored, and then they told me to go back and petition the court to be able to appeal the earlier citation (which I'd paid and therefore automatically plead guilty to) and after innumerable fees and almost $2,000 dollars-I-couldn't-afford later, I'm still waiting to hear about the petition, which may or may not grant me the appeal, which may or may not reverse the suspension order.

I could detail out the convoluted court processes, the legal jargon that swirled around each one, the blank-faced clerks who blandly repeated, "I can't give you legal advice, ma'am" when all I asked was which form I needed to file next because someone sent me directly to that office to do whatever it was I needed to do next.

Lucky for me, I'm smarter than the average bear, a college-educated professional woman who deals with paperwork every day, who has a day job that requires large amounts of initiative, tenacity and follow-up skills, otherwise, I'd have to be reduced to using the mortgage payment to hire a lawyer, which, I swear to God, is exactly what they all seem to push you to do.

The county courthouse for my area is in an inner-city type environment, with a heavily hispanic and black population, and the area is somewhat economically depressed. The courthouse was a microcosm of ethnicities, lots of young mothers with children because they had no one to leave them with, people who don't have a lot of cash to throw at these problems.

And all I could think was, What do they do? When these people in these courts spew Latin-laced legal phrases and tell them to file eight different sets of paperwork with six different offices and pay fees again and again and again? They probably give the hell up. Or sell off possessions or skip paying rent so they can pay a lawyer because it's overwhelming. It really, really is.

I know the laws are there to protect us. The legal system, and our courts, are a vital part of keeping the peace and finding justice for those that seek it.

But today, it's all a colossal and depressing pain in the ass.

Sorry for the vent, but this whole thing has been so demoralizing and really set me back financially just as I was starting to get my head above water. And it's still not over.  I got a four month continuance, and I have to hope it all falls together before then.

Nothing to do but push forward, I suppose. Tomorrow is another day, right?

Email ThisBlogThis!Share to TwitterShare to FacebookShare to Pinterest
Labels: Bitching