Once Upon A Time – Season 6, Episode 1 Recap: Saviors And Villains 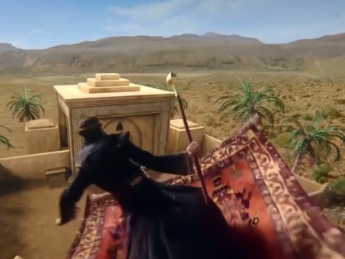 We begin tonight with the iconic opening of thundering hoofbeats as a horse races across the desert, and the smartly generic, “Many Years Ago…” except this horse is being chased by a flying carpet. The rider dismounts at a house to beg a savior for help, but it’s too late.

The carpet has landed and in strolls Jafar, portrayed by Oded Fehr, one of the members of my personal ridiculously oversexed fantasy harem. He's deliciously oily and condescending.

A beaten and bedraggled Aladdin begs Jafar for mercy, but Jafar points out that saviors have a bad history of completely coming apart. They give and give for nothing, and never get a happily ever after. He's wonderfully chilling as he makes that pronouncement, and as he strolls back out, we see the trembling in Aladdin's hand.


And now we’re off to Emma’s house, where it looks like Hook and Emma are finally going to give me my fondest wish….

But of course not.

The earth starts moving and it ain’t from Hook’s leather-clad hips a-grindin’. A giant dirigible ship appears in the sky over Storybrooke (how something powered by a balloon flying through the air can make the earth shake, I'm not certain) and all the main characters plus half the damn town chase it to figure out what the hell is going on.

[Let me pause to give a shout-out to the CGI in this episode. Both the flying carpet and the dirigible looked terrific! Did they finally get some budget thrown their way? Nice job!]

They’re interrupted by Hyde, who reminds them that Rumple has deeded the town over to him. Regina and Emma try to blast him but it only makes him laugh. "There's nothing more dangerous than an untold story," he warns them, "When people don’t want them told."

The dirigible crashes, and at appears to be empty. Dr. Jekyll is telling them to look for clues and they all start rifling through the stuff scattered around when Emma gets a sudden vision of herself in a swordfight - and her hand starts shaking.

We flashback now to Rumple learning from Hyde about the convenient “Temple of Morpheus.” Once there, Rumple can sprinkle Belle with magic sand and then join her in her dreams.

Once he arrives in dreamland, he's met by Morpheus, who walks Rumple through Belle’s dream to his old castle, where Belle is dreaming about her servitude there.

"Fascinating to learn how people really see you, isn't it?" Morpheus asks. Then he tells Rumple that he must wake Belle within one hour (more like twelve minutes, with all these commercials they're running) or she’ll be consigned to a horrid, fiery fate.

Rumple is confident he can get her to fall in love with him again, and rescue her from her endless sleep. He’s a little miffed that the castle looks dingy, but Morpheus reminds him that this is how Belle saw it, being torn from her family and enslaved and all.

Rumple turns on the charm, even tries to re-enact their iconic dance. The room begins to brighten around them, and Rumple poofs Belle into her ball gown.

Regina meanwhile is in her house only to find Zelena unpacking, dealing with a fussy baby and more than a little mortified that she lost the feather (from one of Robin's arrows) that little Roland asked her to give to her sister. Regina forces a smile and tells her to stay put with the baby while she goes after Hyde. She puts a protection spell on the house, and while putting one on her vault, Regina lets Snow know that she's pissed that Zelena lost the feather. Hell, she's just plain pissed about Zelena in general, now that things are settling in. Snow advises Regina to talk to Zelena about all of it.

A short time later at the Mayor's office, Emma is holding an oversized magic spark plug while Regina uses Jekyll as bait to draw Hyde out. Emma gets a vision again of sword-fighting a dark-robed assailant that leaves her hands shaking, and of course, she won’t talk to anybody about it even though they all saw her wigging out. The spark plug incapacitates Hyde, who gets cuffed just as he drops a bombshell on Emma.

He claims to know what's causing her tremors.Emma demands he explain that but he gets hauled away before she gets an answer.

Good God, there are a LOT of commercials tonight. I mean, I know this show is a cash cow for them, but geez….

Ahem.
Emma is now back at the crashed dirigible and shaking like a barfly with the DT's when she runs into Archie – and not by accident. Snow and David sent him to talk to her and she snaps at him, clearly showing that she's a cricket bigot.

Archie tells Emma that she needs therapy to get through her issues – there is no magical cure for it. It's going to take time and hard work.

Well, instead of realizing that her parents are trying to help her, and Archie is trying to help her, she makes a visit to Hyde in his cell to find out what he knows about her tremors. They go around and around for a bit, and ohhhh. I have to say, it's been four seasons since we've had a dark villain with a mesmerizing voice and shady sexual innuendos for anyone to verbally spar with. I so miss that about Hook, but I don't want him to lose what he's gained in character development. Introducing Hyde was a good call, I think. I was certainly squirming in a very delicious way.

Anyway, he tells her to find and follow the red bird, face her own story, and she can find the answers she's seeking. God forbid she open her damn mouth and tell anyone shit is going down again. Sorry, but this irks me. She just spent the last five seasons cultivating a network of family and friends to rely on and support her, but let's just turn her back into season one Emma again and put those walls right back up. Ugh.

Meanwhile, at Regina’s, she opts for some brutal honestly and tells Zelena that she blames her for Robin’s death. She trusted Zelena's faith in Hades, and Robin paid the price for it. Zelena is clearly hurt, and admits she was devastated that Regina wanted to rip out her evil half – the half that was most like her. Regina tells her to leave, and she does.


A short time later, Henry catches Regina trying out a locator spell with Robin's arrow quiver - with no luck, of course. She confesses to Henry that she's having a hard time with the idea of Robin just being gone, with no hope of an afterlife. Henry tells her that when a hero’s story is over, there’s a special place for his soul. He has faith in that.

Snow and David are tracking whoever got off the dirigible, when they find a good old fashioned net trap. Snow realizes they're afraid and takes a chance, calling out to the mysterious dirigible people, begging them to trust her. They come out of the trees, but are still too wary to speak. She invites them to Granny’s for food and refreshments.

Off on the other side of the woods, a red bird shows up just as Hook notices Emma’s tremors. He’s more than a little pissed because Emma isn’t sharing that something’s obviously wrong (as usual!) and storms off, leaving Emma to follow the bird.

The bird leads her to a young girl who claims to be an oracle. She has a scepter with glowing red eyes, and commands Emma to look into them. Emma sees herself fighting the cloaked figure. She loses her sword, and the figure kills her, right in front of her family and Hook. The oracle tells her that she can’t change it – she’s going to die, exactly in the way she saw.

Instead of discussing this with all the people who love, support and are more than willing to help her, she goes back to Hyde. “What’s coming?" she asks him, just before adding, "I will stop it.” He tells her that’s what the saviors always say. He also reminds her that wherever there’s a savior there’s a villain. He plays his words like a master violinist, and he has her second guessing every move she may - or may not - make.

Meanwhile, in dreamland, Rumple is still dancing with Belle, and then he tells her about Baelfire, confessing that he screwed it all up with his kid - all of this mimics the beginnings of their relationship back in Season 1, of course.

Belle asks him if he wants to change and begins to give him true love’s kiss. She recognizes that they’ve done this before, and regains her memory of the present. She tells him that she loves him, but she remembers all his broken promises.

Morpheus shows up to tell her that this was a test -she's not really going to burn in a horrible hell for all eternity, and he can wake her up.

It turns out Morpheus isn't Morpheus - he's actually their unborn son. He begs Belle not to let Rumple destroy them like he did his last family. He then kisses Belle on the forehead, and she wakes.
Rumple is devastated at losing his son before he even knows him, and Belle agrees to return to Storybrooke, but she's going to heed her unborn son's advice and not make a home with Rumple.

Over at Granny's, Emma shows up to find Hook drinking. She lies to him about her tremors, telling him it’s stress and telling him she’s going to go to Archie for help. He seems to take that at face value, but remember mates - Hook is the master of the poker face. And he knows Emma better than she knows herself. I'd bet a giant's treasure house he's not buying a word of that.


Now we head over to Snow and Regina, in a beautiful and poignant scene, having a heart-to-heart about love and loss. As Snow takes Regina's hand, Regina apologizes for being a terrible stepmother. She asks Snow how she made it through the hard times and Snow tells Regina quite honestly that because of the evil queen, she learned to never give up. "The only story I heard was the one I kept telling myself," Regina says, in a moment of epiphany. She's now determined to write a new story for herself, one with "a better ending than the last." Furthermore, she's certain that wherever Robin is, he's at peace. She and Snow get up and leave, and Robin’s missing feather mysteriously floats to the bench behind them. Excuse me a moment.

We end back at Zelena’s farmhouse, where the evil queen (gloriously resplendent as always) is ready with a sour-apple martini, telling Zelena with an evil grin that it’s time for some 'sisterly bonding.'

I'm going to give this one five storybooks out of five for the intriguing possibilities of all the untold story folk. And for Hyde and his sexy, sexy voice.

I'm not thrilled with Emma, but I'm willing to hang with it if it's going to create some tension with her and Killian (heartbreaking though it may be). And I've got a few early predictions to make:
What did you think? Are you hyped to see where this season goes? Or are tired of Emma and her sh*t?