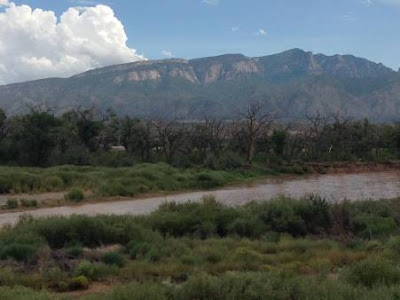 Our last few days in The Land of Enchantment took place in Albuquerque - mainly because there's a lot to see there, too, but also because a whole lot of my college buddies seemed to land there. One of the things I really wanted to take the kids to see was a Pueblo.

At first I looked into Acoma Sky City and Jemez Pueblo, both of which have their draws. Acoma is supposed to be breathtaking, but it is pricey, and unfortunately, we had overspent a lot on this trip already. Jemez was a less-expensive option and also features the option of Jemez Springs (natural hot springs) along with some great hiking, but the Pueblo is only open to the public on Feast Days - and we weren't there at the right time.

Instead, we took the $5 option (and the kids were free!) at Coronado State Historic Site. 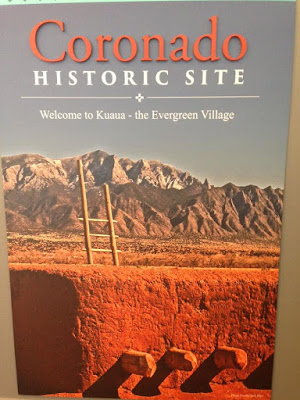 Located just 20-25 minutes from downtown Albuquerque, Coronado is the site of an archaelogical dig on the Kuaua Pueblo. The area (located right along the Rio Grande, pictured at the top of this post) has been occupied for two millenia, first by the Anasazi, then the Tiwa people. 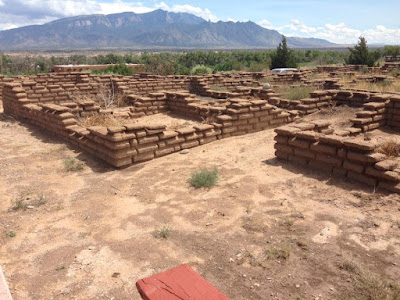 The Pueblo itself was settled in 1325, then abandoned in the 16th century. The archaeologists were able to excavate much of the pueblo, and the kiva (a sacred building used in religious ceremonies), which included beautiful murals on the walls. 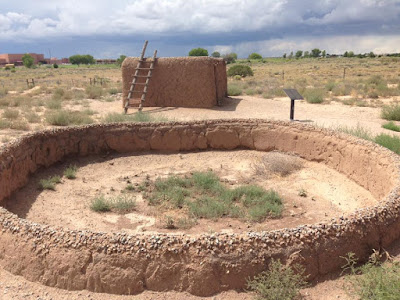 You can see the original murals on display in the visitor center. I couldn't take a picture as there was no photography allowed of the murals, but they were really interesting.

Speaking of the visitor's center, they have all kinds of information on the Tiwa people, and the Spanish Conquistadors who occupied this area. They also have interesting artifacts, some of which the kids are allowed to handle. Check out David - that helmet weighed a TON. 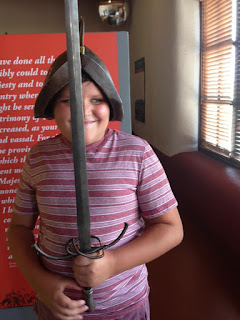 Our next adventure after that was the Sandia Peak Aerial Tramway, which we happened to ride at sunset, after a heavy thunderstorm. The sky was amazing!! 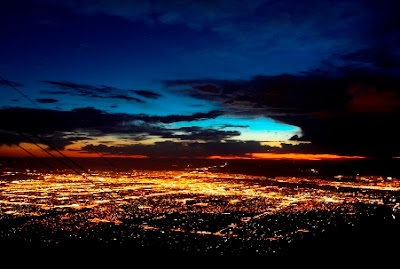 The tram takes you up over 10,000 feet, and for those in a romantic mood (that aren't at the end of their vacation and still have some money left), there's a fine dining restaurant at the top of the mountain with stellar views.

The tram cars just got a makeover, and as long as the car isn't too crowded, you're pretty much guaranteed a great view.

Our final day in Albuquerque had us splitting up. One of my old college friends is a former makeup artist for Chanel, and he now owns his own skincare place in Albuquerque. He was kind enough to give the girls custom facials and makeup tutorials! So let me give a shout-out to Conrad Sanchez Skin Care because he was outstanding! Look him up if you're in the area!

While the girls were getting pampered, David and I descended upon Old Town Albuquerque for some final bits of shopping and to soak up the ambience! 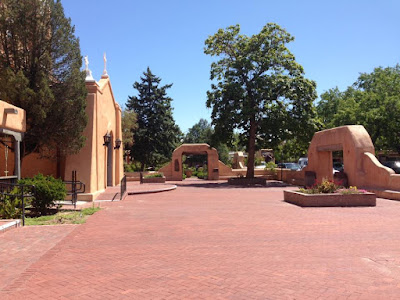 And we ended our visit with a mass dinner between a bunch of old friends at a great Irish pub - and we were all having such a good time catching up and laughing together, not one of us took a picture! Can you believe it?

I think Anna and her friend heard a few too many risque stories about her mom's theatre days, but oh well. I had a blast.

The next morning we were at the airport in the early a.m. and soon after, we were up above the clouds. 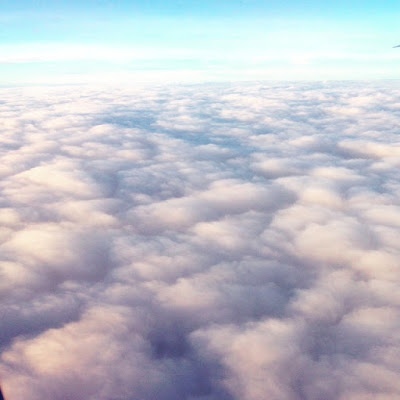 So long, New Mexico. I love you.

Promise to come back soon!