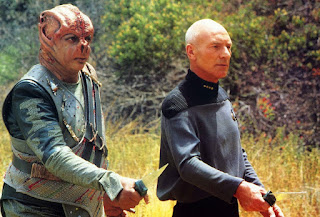 I had the supreme pleasure of hanging out with an old college friend (not that I'm calling you old, Shawna....we're just old friends. And I promise to stop saying "old"). I was trying to explain to her the way that my son speaks,  with repetitive phrases and chunks of movie dialogue.

The movie dialogue is often used contextually, but unless you know exactly which movie he's referencing, and how he's tying that into whatever he's trying to get across, it can seem really odd. "It's like Darmok and Jalad at Tanagra," I told her, knowing that Shawna is as big of a geek as I am and would instantly know that reference.

For those of you who aren't fans of Star Trek (what are there...three of you?) and are unfamiliar with Star Trek: The Next Generation (unfathomable, but I'll indulge...), they had a landmark episode that dealt with meeting emissaries from another culture, who had a huge communication divide to surmount. No universal translator could help, either, because these people communicated entirely through metaphor and inference. Here's an example:


Confused? I'll let them explain it, since they did such a good job:

In other words, they're using chunks of dialogue from commonly known stories (like movies!) to get a point across. For instance, if you asked me what I thought of my boss and I replied, "The lambs are screaming" you'd understand that he's a psychopath, right? Or if you wanted to know why the neighbor kid was crying and I answered, "Wilson, on the ocean" you'd know he lost his favorite toy, one he treated like a best friend.

So when David says, "The astronaut will wish me away," after a big fight with his sister, I know he's drawing from the movie "Zarthura" which features a scene where a wish is granted, and a boy with a younger brother contemplates wishing his brother away because he's so annoying (a visiting astronaut talks him out of it). David is telling us he knows he was being annoying, and he's wondering if his sister wants him gone.

That's how language by metaphor and inference works, and that's exactly the way David talks sometimes, particularly when he's upset and struggling with which words to use. It's a lot easier to take words he already knows, and the feelings behind those words (which, contrary to what a lot of people believe about autism, he definitely does feel), and use them to communicate in his stead.

I never realized before how perfectly this episode illustrates that. I'm going to be using that to explain it from now on.

Well, if you're a geek, anyway. With anyone else, that would just be Shaka, when the walls fell.