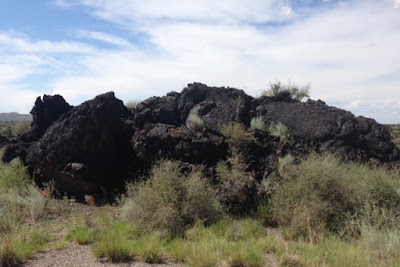 Our New Mexico odyssey began at the Albuquerque Airport (or the Albuquerque International Sunport, it's official name that sounds nothing like an airport so I didn't use it), then into a rental car and down the road we went. We have Anna's best friend, J, along for the ride, and the two girls and David were loving the scenery and the big stretches of nothing between towns....

For exactly twenty minutes. Then they all crashed out, a combination of having to get up at 2:45am to drive to the airport to catch our plane, and the altitude change. I spent a couple of hours in silence just loving the drive, but I woke them up near Carrizozo to experience Valley of the Fires State Recreation Area. Sometime between 5,000 and 1,000 years ago, this was an active lava field, and the rocks are really cool. We hiked the trail for a bit, the kids climbed some lava rocks (like the ones pictured above) and then back in the car we went.

Along the way, we passed through lots of little towns, including one not far from home: Tularosa. Tulie is a small place, but on Christmas Eve, it becomes magical. Known as the Noche de Luminarias, the town lights up with luminarias -over 25,000 of them - centered around the St. Francis de Paula Catholic Church, which dates back to the mid-1800's. 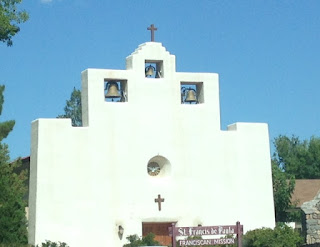 From there, it was just a short drive to my hometown of Alamogordo, New Mexico. And of course, we had to stop on the outskirts of town at McGinn's Pistachio Farm so we could photograph the world's largest pistachio nut: 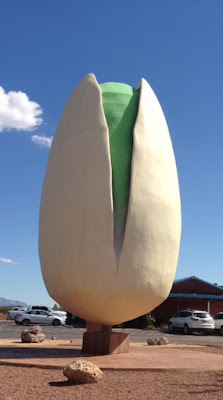 We got settled, and I got one of the things I considered an absolute must for any trip to New Mexico: Blake's Lotaburger.

I've had In-N-Out Burger, I've had Five Guys... but nothing, I mean nothing, holds a candle to Blake's Lotaburger with cheese and green chiles. Those would be New Mexico Green Chiles, of course. Holy God, did that hit the spot. 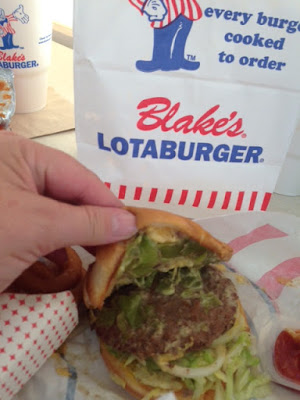 I ended my day with a satisfied tummy and one hell of a view. Ain't no sunset like a New Mexico sunset. Just beautiful. 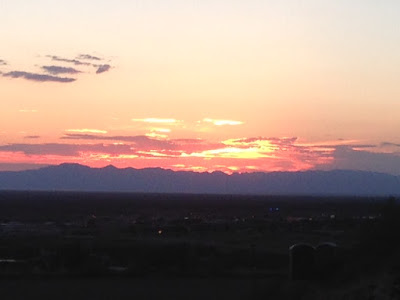 More of our adventures tomorrow!
Oh, it's good to be back home again...