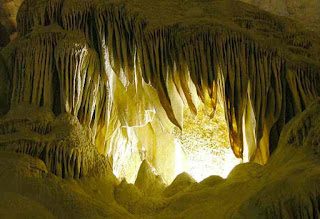 Day four of our New Mexico whirlwind tour began in the early a.m. with a three and a half hour drive to the biggest must-see attraction in the state: Carlsbad Caverns National Park.

You may think you've seen a cavern before, but unless you're a scientist who studies the world's geological formations, you probably haven't seen one this entirely enormous before. It takes about an hour to descend down the winding path from the entrance to the first rest area (which used to be an underground cafeteria back in the day, complete with boxed meals. Now it's more like snack food and pre-made sandwiches, which I'm sure is better for the eco-system of the cave). 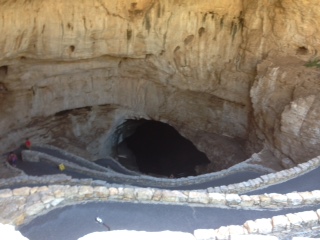 From there, you move on to tour Big Room, which is pretty much what it is. This is an enormous chamber that takes you another hour or so to circumnavigate, furiously snapping pictures along the way because so many of the formations are just breathtaking (like the one at the top of this post). I cannot possibly do it justice with the crap pictures from my phone, so I encourage you to look at the whole gallery of pics taken by people who carry a real camera.

After that, we were hungry, so we stopped in the city of Carlsbad to have a bite, and along the way, Anna and J encountered these guys: 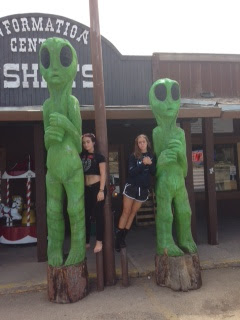 We had to stop, of course. The rest of the trip had us heading back down highway 82 and through some of the most beautiful scenery New Mexico has to offer, through gorgeous mountains lush with evergreens, and into the picturesque town of Cloudcroft. Just outside of town is the remains of an historic railroad trestle known as the Cloud Climber. It's closed to foot traffic now for safety reasons, but still an amazing photo op. 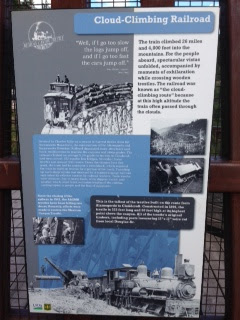 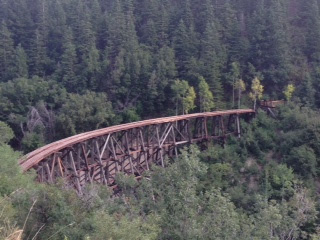 In addition to trees, you're also likely to see a lot of wildflowers, like this wild mountain thistle that grew up the side of the hill and into the parking lot: 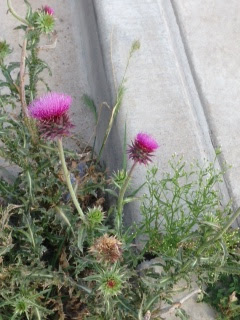 From there, we moved on to the observation point just outside the mountain tunnel on highway 82. The view is incredible anytime, but we'd just driven out of a storm so the sky was particularly dramatic, 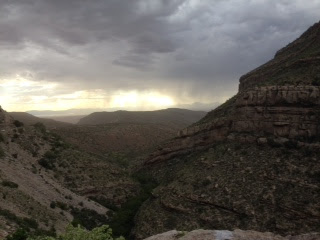 I spent many hiking trips heading down into that gorge. There's a stream down there with water so clear you can see every single rock and pebble. There's also a waterfall that empties into a pool and more fossils than you can stuff your pockets with. If the side of the mountain hadn't been a mudfest, I would have taken the kids down. Oh well...another trip, I guess.

Our time was winding down in the southern part of the state. Next stop: Albuquerque! Stay tuned!