Inquiring Minds Want To Know: What Was Your Favorite Childhood Toy? 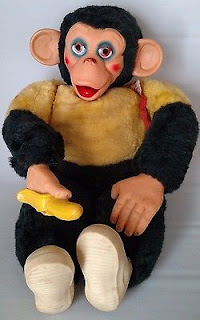 That, my friends, is Zippy.

He was given to me at the age of five, and while he may look more than a little demented now, he was my best friend for a lot of years.

Zippy protected me from the things in my closet that whispered to me. I swear, every time I went to bed it was like an episode of LOST. Never saw a smoke monster, though. I guess I owe that to Zippy and his constant vigilance.

Zippy had measles with me when I was seven. I know kids don't get measles much anymore (not in this country, anyway - thank God) but I had fourteen-day measles and it sucked. My mom drew red dots on Zippy's face, and he had them, too. We both recovered with time, and some Windex. That was for him, not me.

He was joined the following Christmas by his wife, Tippy. She had yellow fur and no suspenders, but a bow on her head instead. They had a son, Chippy, who was won for me at the county fair by my brother two years later. And then that Christmas, I got Sandy and Mandy - they were long-hair monkeys and Sandy had a radio inside her. You had to spin her nipples to tune it and raise the volume (this in no way warped me, you understand...).

Finally, at the age of 13 my parents bought me my last stuffed monkey, a giant three-foot gorilla named Kong. He had a really dopey grin on his face - kinda looked like he got into the banana liqueur or something.

The years have come and gone and only Zippy remains now, passed on to my daughter, and now patiently counting her growing years at the bottom of a pile of Webkins, somewhere in her closet. I suppose I'll move him to my storage chest, if I ever get brave enough to open her closet door.

What about you? Did you have a favorite toy growing up? What made it special?
By Ellie DeLano - August 09, 2016