When An Autistic Child Can't Cope, Things Can Get Scary Fast 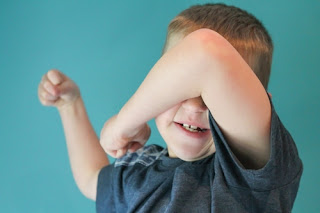 My weekend camping trip ended with a punch of fear squarely to my solar plexus.

Sunday night, we got back to our campsite late after a day out and about. My son was itchy from his chlorinated skin and chafing from his swimwear, so he walked down to the bath house to take a shower. David is fiercely proud that he does this by himself now, and the bath house was just at the end of our row of camping spots and around the corner of the main drive - a short walk.

I got a roaring fire going, and a few minutes later, I heard David screaming "Mom!" over and over, then "No!" Then "Help! Help me! Mom!"


I called Anna out to watch the fire and I took off running, fighting off visions of some psycho nut guy who preyed upon kids like mine greeting David in the shower or trying to yank him into a car or something.

At first, I couldn't find David (it was pitch dark and I just ran without grabbing a flashlight), but I could hear him. He was sobbing and calling my name. I finally located him laying in the open field by the bath house. And relief hit me like a ton of bricks when I saw the problem.

He was wearing a damp swimshirt and swim suit, and the shirt stuck to his body. He'd tried to take it off over his head and it got stuck halfway, jamming his arms and frustrating the hell out of him. He couldn't function like that and he ended up just laying down in the field, screaming for me and hoping I'd come. I felt so awful for him, but at the same time....whew!

"I'm stuck," he hiccuped between sobs. "I needed you."

"I know," I soothed, helping him get the shirt off. "I know. I'm here. That must have been so frustrating for you."

Thank goodness, it was me. We talked about how next time, he should just walk back. Next time, if something's too hard to do by himself, he should come back and get help, because yelling can give people the wrong idea, or invite people to help you when you already have someone who should help. We talked about how yelling is great to do when you're in danger, but a stuck swim shirt isn't danger.

I don't know how much of that sunk in because he was still pretty upset. So we'll talk about it again. And again.

And next time, Mom will send him to the bath house with the shirt already off. I'm not going to insist that I go with him, not when he's worked so hard and been so proud of this little bit of independence. Hey, at least I know I'll hear him if he needs to yell about something. The whole campground heard him, I'll wager.