My Daughter Is So Much More Than Her Brother's Sister 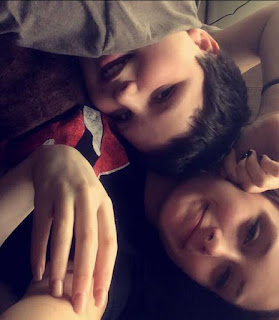 I love that pic. And I love that they love each other. Sure, they want to scream at each other on a regular basis, but it doesn't change the love. Nothing changes the love.

And I know I gush about my kids all the time, but there's no escaping the fact that I gush a lot more about David. I want to make this clear that it's not because he's better, or more valuable, or more dear to me. He's just the easiest to talk about because he has to work so damn hard at all he does.

Sometimes, it's easy to forget how hard she works, too.

This is a picture of my daughter's 4th quarter grades in this, her freshman year:

When she came to me at the end of her 8th grade year and told me she wanted to double up for her freshman year on all of her core classes, skip over a level on two of them, and in doing so eliminate any kind of interesting or "fun" electives, I will admit I wasn't sure it was a good idea.

She's never been a big fan of school.

She's never wanted to be part of the crowd, or join a club, or a sport. School to her is a necessary chore - she recognizes the need for it, but like eating vegetables, it's just something she chokes down. And if she doubled up on everything her freshman and sophmore years, then her junior year would become her senior year.

If she could handle it. That's a lot of stress. A lot of work. A lot, period.

She's insanely smart, and always has been. Math, English and Spanish are a breeze for her, and she took to physics and engineering with gusto. The girl wants to be an astrophysicist, and she will be. I know she will be.

And she did it all with very little help from me. As her parent, it's easy to bask in the accolades of parenting well-done, but the truth is, she's on her own a lot more than I'd like. Her brother takes the majority of the focus around here, leaving her the responsibility of making sure homework is done, projects are finished, and studying is complete. And all while being shuttled to another state to visit her father one night a week and every other weekend. All without much help from a mother who totally and utterly sucks at math. All while her brother sings incessantly while she studies, interrupts her to rattle off movie dialogue as she's working on a paper, or has a meltdown while she's in the middle of an Algebra review.

I try to minimize as much of that as I can, and she does retreat to her room when it gets too disruptive, but more often than not, she just soldiers on, and gets it done.

She's doubling up again next year. She's not going to graduate with any of the friends she grew up with, and when she's 17, she'll be taking on the adult world, either at college or possibly traveling the world on a gap year first. She hasn't quite decided yet, and I'm not worried. She'll figure it out. She always does.

And that, my friends, is her greatest strength. Not the beauty. Not even the brains. It's the resilience.

So often she's been thrown into her brother's shadow, and despite that, she's grown and thrived and bloomed into the magnificent person that I am completely in awe of.

I want to shout it from the rooftops. But I'll settle for this blog.

That's my girl, and oh, how beautifully fierce a thing she is.