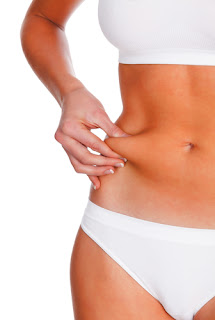 I use stock photos on nearly all of my blogs, and as such, I have subscriptions with a few different places to provide them.

Over the weekend, I was searching for a picture associated with the word "pinch" - I wanted to do a blog on my author site about an exciting thing that happened and I was going to title it: Somebody Pinch Me So I Know I Didn't Dream This." That title bit the dust when I discovered that finding a picture of someone pinching themselves leads to only three options. Anywhere.

1) A woman pinching her own waistline. Usually a very fit woman, so she's only pinching skin over tight muscle.

2) People pinching their nose as if experiencing something foul.

3) The occasional picture of someone cooking.

Unfortunately, the predominant one of those three is the first one. Hundred and hundreds of women pinching their "flab." Or imagined "flab."

I gather this is a very commonly used type of picture.

Strangely enough (?) there were no pictures of men pinching flab. None. Nada. Zip.

They don't show men hating on their own bodies. Amplifying their flaws or inventing them so they can still look good while body hating.

Rather telling, don't you think?