Once Upon A Time - Season 5, Episode 21 Recap: Love And Loss And All That Lies Between 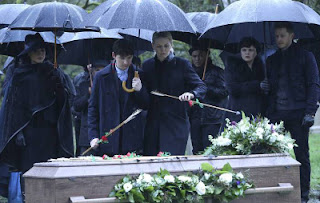 We begin tonight above ground in Storybrooke, and Hades is still doing that mouth-hanging-open thing. Zelena is feeling uneasy about Regina still not showing up and Hades gives her some BS about everybody hanging back because they still don't trust him. Zelena insists on interceding on his behalf, so she hands over baby sweetpea to Hades for safekeeping before she heads out.

Arthur shows up (having escaped from jail) and he and Hades are instant bros - right up until he mentions that he wants to rule and Hades offs him. Well, that's one way to end a plot arc.


Snow meanwhile is pissed off that Sleepy y'know...fell asleep while guarding Arthur and she orders Merida to search for him. The others show up and we get a sweet reunion between David and Snow. Emma looks pretty shell-shocked as David brings Snow up to speed.

Zelena finds Regina, who explains that Hades not only has breathing issues, he's still a villain who tried to trap them in the Underworld. Zelena is still in denial and Regina assures her that they'll do whatever they have to to protect Storybrooke. Zelena poofs out, thoroughly pissed off.

Meanwhile, Arthur has shown up in the Underworld - guess his plot arc isn't over just yet, and the underworld still looks like Storybrooke even though Hades isn't around. Whatever. Hook is more than happy to bring him up to speed, but Arthur's still a little freaked out over the being dead thing.

"Denial, grief, anger, can we get through to acceptance?" Killian urges. He's on a mission to help Emma and the blind witch helpfully points out that Hades never reveals his secrets.

Hook asks Arthur to team up with him - find out what Hades is hiding, thereby proving himself a worthy king and move on to a better place. Arthur agrees and now they're on a quest.

Above ground in Storybrook, David is being his warm and empathetic Daddy self, as he urges Emma to grieve and not block it all out.

Over in the mayor's office, Hades makes a big show to Zelena of turning himself in to the others to save Zelena and the baby. She takes the bait, refusing to let him "sacrifice" himself and they form a plan to fight the others. Hades reveals that he holds "The Olympian Crystal" - something he stole from Zeus - that can be used as a weapon.

"The Olympian Crystal?" Is that the best they could do? Why didn't they have him still the lightning bolt? Oh, wait. That's been done.

Anyway, Hades is going to use the big piece of rock candy to defend them.

Zelena puts up a protection spell just as the others show up, but Regina conveniently remembers a tunnel that leads right under city hall they can use to access the building because apparently, protection spells don't work on the floorboards.

Emma is dismayed when the others urge her to hang back. Regina points out the she's in a fog of grief and may not be their best asset, but Emma insists she's got her shit together.

Robin and Regina head down into the tunnel, where they proceed to have a fight about Zelena, and he gets pretty pissy. Can you blame the guy? Regina's willing to believe in Zelena, but he's been raped and had his baby stolen, so he can't be too objective about any of this.

Rumple, meanwhile, shows up at Game of Thorns, but Belle's Daddy refuses to wake her until Rumple's good and gone. Rumple pulls out Mr. Hurty Walkingstick but Moe stands firm. Before Rumple can commence wailing on the old guy, Emma shows up. She asks Rumple for help but he won't play, blaming Emma for getting them into the whole mess to begin with.

Down in the depths of the Underworld, Hook and Arthur are looking for the pages from the storybook.

Hook is seething (oh, how he's seething) and pleads with Arthur: When you were a king, where did you hide your treasures? (Uh...in the treasury?") But no, Arthur hid his treasures in his throne and hey, what a coinky-dink! So did Hades! They find the missing pages, which how them how to kill a god.

Back at the blind witch's diner, Arthur and Hook show up to talk to Cruella.

"Knew you'd be back," the witch snarks. "I smelled a bromance."

Killian demands to know where the phone booth is to the other world. Cruella destroyed it, and threw the storybook in the River of Souls.

Above ground, Snow, David and Henry are going through the library book by book hoping to find something to defeat Hades with. Emma is seething now, not wanting to waste time with this. Snow convinces her that the best way to help Hook reach his happy ever afterlife is to read books and find something to kill Hades.

Over at the mayor's office, Hades is repairing the broken rock candy crystal of unbelievable power so he and Zelena can rule Storybrooke, but Zelena was looking for a house with a white picket fence and a life of peace. Her uneasiness is starting to show.

Hades is now having an open-mouthed orgasm putting the rock candy back together.

Zelena suggests they take the crystal and leave Storybrooke to go somewhere they can be together without all this fighting.

Down beneath city hall, Robin finally apologizes for being pissy and Regina apologizes for not doing enough to help him. He assures Regina that she's his future and he'll give Zelena another chance. They finally reach the doorway into the mayor's office.

"Usually I have a rule that I don't go into a job without a good plan to get out," Robin says in a horrible bit of foreshadowing - and in they go.

Down in the underworld, Arthur and Hook traverse the river of lost souls and the book is on display, being clutched by a gargoyle. One of the souls from the river tries to drag Arthur in, and Hook saves him rather than going for the book. The apparition then goes after the book, but the bros team up to vanquish it. Hook puts the pages back in the book and hopes that by doing so, the pages will appear above-ground as well.

Over to Emma in the library, going through the storybook, where she comes upon a picture of her and Killian at the ball in the Season 3 finale.

The pages of the book blow open and there is the answer she needs. She heads over to the mayor's office, and starts slamming the protection spell with magic. Zelena sees her and poofs out to confront her.

Emma shows her what she's found, but Zelena grabs the pages from Emma, and now she's seething because they're trying to kill Hades. So much seething in this episode!

Inside the office, Regina lets Hades know that if they go head to head, he'll lose Zelena forever. Hades pulls out the Rock Candy, telling Regina that if he hits her with this, there's no afterlife, no contract extension, and no returning to the show in anything but a flashback. He takes aim, and Robin jumps in front of Regina, taking the blast.

A beautiful goodbye is ruined by extreme closeups on Sean Maguire's goofy sad face. And what is that....Panavision? His spirit lingers a moment, and then he's gone.

Regina goes after Hades, but Zelena poofs in and gets the bolt. "Robin died to protect me," Regina tells her, "That's what true love is! Giving up everything for the person you love!" Hades reminds Zelena that she could have everything she ever wanted just by killing her sister. He's breathing heavily through his stupid open mouth as Zelena makes her choice.

She stabs Hades with the rock candy and off he goes, turned to the innards of a pixie stick.

Regina cradles Robin's lifeless body, and we watch the sisters come together in their grief. I'm sorry to see Sean Maguire go (he didn't do much for the plot, but damn, I wanted Regina happy), however, this moment between the sisters was worth waiting for. Beautiful.

Back in the Underworld, Hook reassures Arthur that Emma did what she needed to do because he knows his girl. The white light shows up and Arthur decides not to go. He's going to stay and repair a new "broken kingdom."

Killian moves into the light, emerging in the halls of Olympus where he meets Zeus, who thanks him for helping the others get rid of Hades. Zeus tells Killian he's there to escort him 'onward.'

In Storybrooke, Emma is putting Killian's flask on his grave and talking to him as she moves through her grief. Across the way, in the cold, dreary rain. Robin's funeral is being held.

Everyone is placing arrows with roses on the coffin, and oh, poor little Roland! Regina is stoic. Everyone is wearing black but Merida, because wardrobe only had enough budget for one dress for her, I guess.

Zelena decides to follow the fine tradition of naming a baby for someone who gets offed, and baby Nameless becomes baby Robin.

Emma stands alone in the graveyard afterward when suddenly there's a magic ripple and Killian shows up, alive and well, courtesy of a grateful Zeus.

Rumple waits till everyone's busy at the funeral and makes his way to the mayor's office, where he retrieves the chunk of magic rock candy that remains, buried in Hades dust pile.

"You should have taken my deal," he chides. And we end on Rumple's chilling pronunciation: "This is my kingdom."


I'm giving this one four phoenixes out of five.

They were tying a whole lot up quickly and conveniently (especially Robin's death - talk about throwing a moment away), but oh, I love how far Zelena's come. I can't wait to see the two sisters, raising the kids, hashing stuff out over coffee...kicking evil's ass together. The reunion between Emma and Killian was expectedly wonderful but a little creepy watching them make out next to Robin's grave. It looks like we're back to season one folks, with evil Rumple, and Regina raising a little boy. We'll see where we go from here.
By Ellie DeLano - May 09, 2016