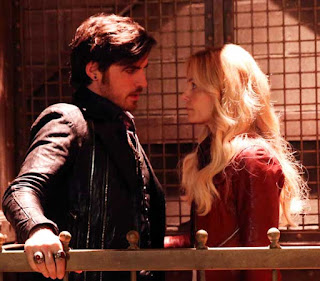 The episode opens with Regina letting the others know she trusts Zelena where Hades is concerned. This goes over just about as well as you think it would. She snarks at Killian, he snarks back and Emma intervenes to remind them they're all in this together. Into this kerfuffle (oooh I love that word) strolls Hades to ask them for help. Rumple and Pan left him a ransom note offering Zelena in return for Hades tearing up his contract with Rumple.

Hades offers Emma a deal: he'll remove all the names from the headstones if she'll help him. Emma agrees, of course, and Hades stares at her intensely with his mouth hanging open. Why does Hades always have his mouth hanging open? Is it an allergy thing? Dramatic effect? It's getting on my nerves.


Flashback now to a younger, bespectacled Emma (!) who's at the roadside stand in the real world outside Storybrooke, asking about her origin story by flashing the newspaper article about her being found as a baby.

Nobody there can offer her any help, and as she sits down, dejected, a woman shows up and sits with her. It turns out she's a bail-bondsperson, and Emma is her mark. (This was a fabulous callback to the pilot episode, because the bail-bondsperson calls her out the same way Emma called out her mark and even boots her car just like Emma did with her perp).

Ahead in Underbrooke, Hades shows up at Granny's for the rendezvous with Pan and Rumple.

He rips up the contract, but Pan tries to double-cross Hades by taking Zelena's heart for his own use. Emma shows up just in time to stop him. Rumple and Pan take off after being thwarted, but Rumple gives Emma a warning before he goes: she picked the wrong side in this battle.

Hades kisses Zelena, and True Love's KissTM, which restarts his beating heart. The ground rumbles, and Hades lets them all know that the hands of the clocktower clock will start spinning and a portal will soon open to the world above now that his banishment has ended. This portal will close at sundown.

Hades honors his word and removes the names from the tombstones, leaving only Killian without a way back. Killian is skeptical, but Regina manages to split Emma's heart. When she tries to shove it into Killian's chest, Emma starts to gasp and choke. Hades tells them that Hook's soul has been separated too long from his body. They need something stronger.

He tells them of the legend of Orpheus and Eurydice, who managed to escape the underworld (which Henry confirms with the book), and in order to do it Orpheus had to feed her ambrosia, which is found only in the deepest depths of the Underworld. Emma has to offer up her heart for judgement in order to get to it, and Hades is kind enough to remove it and hand it to her since apparently anybody can remove Emma's magically protected heart now.

Here...I popped it out with a spork.

Over at Gold's, Rumple kisses Belle, but of course, it doesn't end her curse because Rumple loves his dagger more than her. Dear old Dad shows up and he offers Rumple Pandora's box to keep Belle safe in, until the portal opens. Why he needs to do that, I don't know. In return, Pan still wants a heart.

Robin shows up after the others send him a message, and Regina convinces him to reluctantly hand the baby over to Zelena. Robin is really not okay with this. I mean at all. Can you blame him?

He steps away before he says something rash to Regina, and Rumple takes that moment to snag Robin's heart.

Flashback to younger Emma again, and she’s broken out of the cuffs at the hotel room she’s sharing with the bondsperson. She rummages through the woman’s purse (and we learn her name is Cleo), planning to take her money, but she also finds a picture of a young girl labeled, Tara." As she turns to go, she spies the internet site the bounty hunter used to find her and changes her mind about leaving.

Cleo is shocked to find Emma out of her cuffs and still sitting there, but she agrees to help Emma find any information she can about her parents. They head over to the courthouse the next morning, but there's nothing much in Emma's file and it's nothing she hasn't already seen. She freaks out, demanding to go and search the files herself.>Cleo drags her out of there, telling Emma to get her shit together. Then she tells Emma that the jacket she wears  (one that bears a striking resemblance in style to older Emma's iconic red jacket) is her "armor" - it's a physical embodiment of protecting herself emotionally - and Emma to find her own armor. She cautions Emma to move on with her life instead of trying to dig up the past.

Forward to Underbrooke, and Henry isn't ready to leave the Underworld without helping everyone with their unfinished business. He's determined to help anyone who's still there and sets up a table with his author book to offer his services. Hey look! ! It's Stealthy! Henry helps the dwarf through his issues and Cruella shows up, pushing her way through the line. She's now determined to keep everyone there and rule hell herself.

"You dissolved my James," she sniffs at David. "The best toy in the whole playpen."

And he had such a big....sword

Since Cruella can't harm them, the blind witch traps them in the library, where they'll stay until after the portal closes.

Meanwhile, in the depths of hell, Emma and Killian come upon a set of scales with an inscription:"Only a heart filled with true love can pass."

Emma is reasonably sure of what she feels for Killian, but he makes an astute observation:

"Why can you only tell me what you feel when we're facing certain death?"

Emma remarks about her "armor" being on so long, she forgets she doesn't need it with him.

She places her heart on the scale, and suddenly she's starting to die. Killian tries to free the heart but he's caught in a fiery tornado. Emma chooses to save him instead of her heart, and that action proves her love, stops the tornado and opens the door, thereby denying all the die-hard Captain Swan shippers the sight of True Love's Kiss. Dammit.

Flashback again and younger Emma has escaped from the bounty hunter again and is now at the courthouse going through her records herself. Cleo shows up, of course, reminding her that they're both in trouble now for breaking into federal property, setting it up nicely for the sirens that sound a moment later. They take off running, and Cleo busts out a window for them to dive through.

They manage to escape the cops, but Cleo is badly hurt by the glass from the broken window. Cleo collapses in an alley, urging Emma to get out before the cops come. Emma reminds her that she has a daughter to get home to and Cleo tells her that Tara has no idea who she is. She took the picture from afar and has never been a part of her daughter's life. She cautions Emma to let go of her past and then she shuffles off her mortal coil.

Forward now to the deepest depths of hell, where Emma and Killian discover that the ambrosia tree is dead. Hades chopped it down and clearly lied to them to keep them from returning to Storybrooke.

Regina, meanwhile realizes that Hades must've given the witch the spell to imprison them, since the blind witch's spells are always half-baked.

Hades and Zelena get through the portal, as Zelena reluctantly looks back, wondering where Regina is.

Over at Gold's shop, Rumple shows up to confront Peter Pan (aka Dad) and he presents him with the heart, pushing it into Pan's chest.

Surprise! It's the old Rumple switcheroo. He put a glass vial filled with water from the river of souls in Pan's chest instead of Robin's heart, reminding him that "Villains don't get happy endings" as Dad melts away. Then Rumple traps Belle in Pandora's box instead of magical transporting her to the portal and carrying her through like a decent human being.

Down in the depths of Captain Swan despair, Killian tells Emma she needs to save her family from Hades, and he's not going back up. Emma balks, of course, but he tells her to let him go. Then he reduces my heart to rubble with this line:

They hold each other close, and the tears are flowing freely - his, hers and mine.

"Don't let me be your unfinished business," Emma begs him. "Move on from here."

They kiss through the bars of the elevator, and Emma holds his hand for as long as she can while she takes the world's slowest, most painful elevator ride.

Oh God. God help me. Excuse me. I need a minute.

Whew. Must remember to breathe. Right then. On we go.

Flashback to Emma working as a rookie bail-bondsperson, and she has tracked down Cleo's daughter, Tara, who works in a clothing store. Emma brings her all the info she's collected on her mother over the years and lets Tara know that Cleo is dead. Tara is saddened to hear it, but also very grateful to have learned anything about her birth mother. Emma starts to leave, but on the rack in the store hangs that infamous red jacket. Emma buys it and slips it on, calling it her armor.

Forward to the library in Underbrooke. Emma tearfully lets the others know that Killian isn't coming. She and Regina blast the doors open and they all head for the rapidly shrinking portal. Henry grabs the book, but at the last minute he leaves it on the library cart for others to find so they can get through their unfinished business.

At the portal, Emma turns back, clearly torn. She tells David that she realizes the armor isn't protecting her anymore. And then she goes through the portal with tears in her eyes, leaving Killian behind.

I AM NOT OKAY.

I loved Emma's backstory, Regina was in fine, snarky form, Killian ripped my heart out, and I never in a million years thought Emma would walk out of hell without him. Damn you, writers. Damn you all.