I Went Viral And Wow, Has This Been An Experience 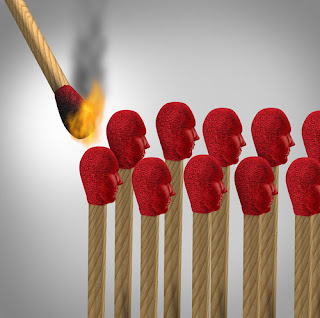 When I wrote my post about Target last week, I remember thinking, "I'm gonna have some yahoo comment that this is all made up. Or that I'm a biased liberal hack."

I know the story sounds bizarre. It was. A thoroughly bizarre event. And BlogHer decided to feature it, which led to a good amount of fan mail and supportive comments, and a few yahoos who called BS or called me names. Whatever.

Then SheKnows decided to feature it (SheKnows owns BlogHer) on their network, which was picked up (ironically) by Yahoo and ran on their mainpage.

That's when the fun really began!

On the plus side: I got retweeted, Facebook forwarded, and shouted out all over the place. I got fan mail and kudos and atta girls and plenty of supportive remarks.

And of course, I got the hate.

Some of it came from the sensationalist title and rather risque picture that ran with it on SheKnows. That point I will give them and I want to say this: I didn't pick either of those things. SheKnows changed "Someone made me uncomfortable in a restroom at Target" to "The Horrifying Incident That Happened In A Target Bathroom" and changed my boring stock photo of a bathroom sink out for a woman pulling lacy panties down her legs behind a bathroom stall. I didn't have any say in that and if I had, I wouldn't have changed my original post. Honestly, I was just as offended by the new picture.

I got plenty of comments and mail telling me I made it all up "to cash in on it", or to "forward my agenda." The first made me laugh because my blog is so far from profitable it might as well be in another solar system. If I did this for the money, I'd have starved long ago. The days of making living wage money off a blog ended years ago, unless you do a whole lot of giveaways and write nothing but clickbait. Not my thing. And as for my "agenda" - I have made a serious point of staying away from politics and religion on my blog for a reason. This is the reason. And the only agenda I had that day (ironically) was the same one that woman had: to pee in peace.

I also had lots of people calling me - and my daughter - some really horrible names.

(Special note to the haters: you can call me all the hateful names you'd like. I'm a big girl, I can take it. But my daughter isn't "sick," "an abomination," "evil," or "perverted." She's gay. And your insistence on calling a young girl who's never done you a moment of harm some really vile names says much more about you than her. If you were looking to upset her, you missed your mark. She may not be a grown girl like her mama yet, but she's fierce and she rolled her eyes and shrugged at every one of them).

I had some incredibly disturbing mail from a couple of people that I've forwarded on to authorities just to be safe. Strangely, the majority of hate mail about my uncomfortable ladies' room incident came from men.

I had one guy use the F word eleven times in one sentence only to tell me my post was the stupidest thing he ever read. I'm guessing that's not a very long list.

I had one guy tell me that my daughter and I are going to get raped in a Target bathroom someday and he hopes the perpetrator puts it on the internet for everyone to watch. Nice.

I had one guy tell me that I wrote the piece because I'm hoping to let a pervert rape my daughter and turn her from being queer.

Because, you know, once a girl gets good and properly raped, she really wants more of those man parts, I guess.

I haven't answered most of these with anything more than "have a nice day" if I've answered them at all. I've been blogging a looong time and I learned very early on not to feed the trolls. I've got nothing to prove to anyone. Believe the story or don't believe the story. Whatever.

And yes, it is "convenient" that it happened at Target - but that's precisely why it happened, I suppose. Because I was at Target, the current focus of a furor over their new bathroom policy. If that furor didn't exist, I'm guessing this woman wouldn't have given me the time of day.

I also got mail from people who called me on my own lack of empathy. Those people, I get. And I do understand how someone could be concerned that a creep claiming to be transgender could hide out in a bathroom to molest or photograph unsuspecting women. I'm a mom, too. More specifically, I'm the mom of a really pretty teenage girl and a boy with a disability that makes him a target for people like that, due to his lack of communication skills.

But I also know what the Target policy really means. It means if you are a transgendered person, you may use the restroom that you identify with - peacefully and unobtrusively - without being reprimanded by anyone working at Target.

It does not say that a man can trudge right into the ladies' room, peek over stalls, photograph or video women within, harass or molest them, and get off scott-free because he claims to be transgender.

Why? Because there are laws against that. No one - male, female, transgender, asexual, fifth-level-mage, or sentient avocado - may do any of that without criminal repercussions. And Target will comply to the fullest extent of the law when that happens. And let's not forget: according to the U.S. Department of Justice, 86 percent of all sexual assault cases reported to law enforcement were committed by someone known to the victim (Bureau of Justice Statistics, 2000).  It doesn't mean pedophiles and rapists don't lurk in bathrooms, but it does mean that getting frothy at the mouth over this is overprojecting a bit.

So what do you do as a concerned parent? If your kids are young, you go into the bathroom with them. Or you use the family restroom. If they're old enough to get it, you educate them about boundaries, personal space, and what to do when someone violates that anywhere - and not just a Target bathroom.

I also got a few people who wondered if perhaps the woman had gone through a prior trauma, perhaps a rape or attack in a bathroom - and advised me to be a little more understanding. That thought actually crossed my mind in the moments after she peered in at me. But then she totally dispelled that notion when she told me that along with men, she was worried about "homosexuals" using the restrooms as well. That line, and that line alone tells me the woman had more issues than a Target bathroom policy.

All in all, the reminders to show a little empathy were exactly the point of my post. In the end, I was the one snarking about the woman, when my daughter (who has far more right to be offended by what happened to me) chose to speak of her with kindness.

And kindness is a lesson we all need to learn.

Email ThisBlogThis!Share to TwitterShare to FacebookShare to Pinterest
Labels: Blogging