A Husband Learns That Poop Is Inevitable When Parenting 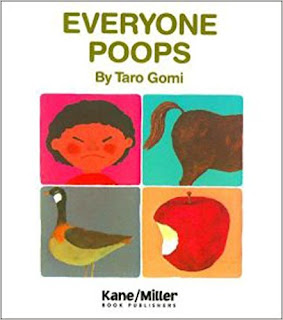 
"The incident" - a name by which it will be forever referred to - began with a bath. It was time for my daughter to bathe and begin the nightly ritual of putting her in bed - over and over again. Bedtime she hated, but bathtime had never been an issue with her. She loved the water.

I had just stripped her down, and she was playing with the doorstopper in the bathroom while I tested the water. All of a sudden she said "uh-oh" and then she started screaming. I whipped around to see what was going on and I realized she had just pooped on the floor. Yuck! She was literally dancing over it in fear.

I reached for her arm to pull her away, and she began climbing me to get away from it. I started screaming for my husband to come and bring the Clorox wipes. When he finally showed up (after what felt like an eternity), she started climbing him. Once he realized what was going on, he let out a roar of outrage because she was really dirty. He nearly dropped her when he noticed the brown streak on his shirt. He managed to grab her just before she hit the ground, hoisted her up and then shouted again when her butt slid along his arm. He reeled backwards, slipping in the mess, and landed in the hallway with her on top of him, both of them flailing about. I had to deal with the two of them shrieking like little girls while I was frantically trying to wipe up. It was beyond ridiculous.

It only took a few minutes to speed clean the floor, but it took over an hour to calm her down, even after her bath. She kept looking around the bathroom to make sure the evil poopie was gone. It took awhile before she fell asleep, and I had to make up a story about the brave knight who fought the evil Poopie Dinosaur and flushed him into the land of Gone Forever. When her eyes finally closed, I sighed with relief and headed into my bedroom.

"You were wearing shoes, you know." I raised my voice so he could hear me over the water.

"I know. I'm not taking any chances," he called back.

"Do you need me to clean your shoes off for you?"

"No, I needed new sneakers anyway. Hey, can you pass me the peroxide?"

I opened the shower door to find him staring up at me, mutinously.

"Listen, you might be used to wallowing in her fluids, but I feel like carving part of my arm out with a steak knife."

I slammed the shower door, shaking my head. Men. Honestly.

"And you can throw that shirt away, too!" he yelled after me.

We ended up buying a steam-cleaner for the floor the next day at Costco. And then I had to call Stanley Steemers to get the carpets cleaned. I scrubbed the tub in the hall bathroom four times with bleach-infused cleanser, but he never took a shower in that bathroom again.

I had to buy the book "Everyone Poops" in order to minimize the trauma to my daughter, who was now far from thrilled with the idea of giving up her diapers. I finally convinced her (through repetitive readings of the book over several months) that the Evil Poopie Dinosaur wasn't going to burst out of the toilet and attack her. Her father wasn't so sure.

For months afterward - hell, maybe it was even a year, he swore he could still smell the poop. Like her turd was haunting us the way it haunted him. He had a solid case of Post Traumatic Sh*t Disorder.

And he never noticed that I washed the shirt and put it back in his drawer.
By Ellie DeLano - May 26, 2016