To Dad, On His Eightieth Birthday 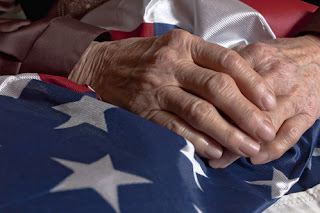 When I was two,  my mother snapped a picture of me in a frilly nightgown, white-blonde hair curling at the ends from my bath, and I'm kissing a picture of a man in a uniform.

He was in Viet Nam at the time, and I was lucky enough to have him come home a year later. I've had him ever since.

Eighty years of a life well-lived. He came from a poor Arkansas family, joined the military in his teens, became a purple heart veteran, made a career out of jet-engine repair, raised a family and watched us all go on to have lives of our own.

Between his three children are three college degrees (one of them an advanced degree), one child who flew with Air Force One, one child who works with advanced robotics systems, and a child who just landed a book deal and works as an autism advocate.

None of us have ever been addicted to drugs or alcohol.

We all finished school and went on for more school.

We all have jobs and friends and people who love us.

And the best part of all of those lives?

We all still have our Dad.

He lost Mom four days after their forty-fifth wedding anniversary, and had to make his life over again. He's still going strong. His step's a little slower - he's got a hip that bothers him now. He's had a heart attack and a few stents in his arteries. His hearing isn't what it used to be, after decades around jet engines, but his mind and his wit are sharp, and he's still got the greatest gift he ever passed down to all of us: endless curiosity.

Happy Birthday, Dad. Give me at least twenty more years, please. You haven't seen it all yet.