Once Upon A Time - Season 5, Episode 18 Recap: True Love In Ten Minutes 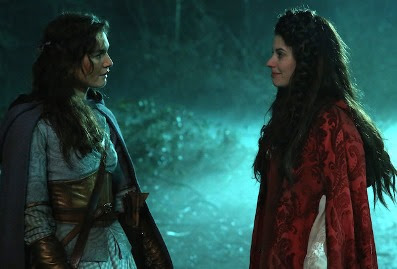 We start this episode with everyone gathered around an unconscious Red, and Ginny Goodwin's pregnancy is glaringly obvious. Somebody should have handed her a pillow to cuddle or something.

And from there, we flash back to Oz with a delightfully generic "some time ago." Ruby and Mulan are searching for Ruby's pack when they happen upon Toto, who Red somehow seems to be besties with because she knows him instantly. Right behind Toto is a very grumpy Dorothy, and let me pause a moment to say: Holy God do I love Red's hair.

Anyway, somebody (Zelena) pissed in Dorothy's cornflakes, so she bitches at them before a cyclone comes, coincidentally bringing Zelena back to Oz.

And now we're in Underbrooke and Hades has left Zelena a dead flower on the table in her farmhouse. He shows up to warn her that Red is here. Zelena is truly worried because "wicked doesn't begin to describe" what she did to Red. She decides that she needs to leave before the rest find out what she did - so she plans to use her magic slippers to get out of the Underworld.

Hades tells her to stay and face them, but Zelena refuses. He then promises to take care of Red for her.

Over at Gold's, Belle is looking through her copy of "Her Handsome Hero" and self-flaggelating over Gaston's death. Rumple tries to reason with her that she killed the guy for all the right reasons and therefore isn't really a murderer. Belle still isn't okay with it. She's determined to make it right on her own.

Red finally wakes up, and it turns out she used a tracking spell to find Zelena because Dorothy went to face Zelena and is now missing. Wait- did Hook just call Red "love"?

[youtube https://www.youtube.com/watch?v=-K7fCQlUhj0]
What the hell? This is me making my unhappy face. He called Regina "love" last week. This is a pet endearment and must be used in a proprietary manner at all times.

Meanwhile, Snow wants David to haunt Neal because it's been a few days since they spooked the kid and he might actually become well-adjusted or something if he doesn't hear their ghostly voices.

David heads over to the phone booth with Killian only to find Cruella is now the mayor and she's having the phone booth removed on Hades' orders. Oh look, it's Claude! you think he'd be pissed at Killian - after all it was his hook that sent him there. Is his unfinished business with Killian for killing him, or Regina for abusing his corpse (since she ordered Hook to drag it to Oz to free her Daddy)? Could have been a fun moment but oh well, we're just gonna move on.

Cruella offers to make a deal and let David haunt his kid in return for being written back to life. He doesn't take the deal, so she takes the phone booth.

On the other side of town, Zelena tries to use the slippers to escape Oz but gets stopped by Regina. Red demands to know what she did to Dorothy. Zelena admits she's trapped Dorothy in a sleeping curse. And with no family and nobody to love her, there's no one who can give Dorothy what she needs: true love's kiss.

In a quieter moment between the sisters, Zelena offers the slippers to Regina in return for her daughter. Damn, what are those shoes, size 15? They look like Shaq shoes.

Regina encourages Zelena not to run away. "Just because you made one bad move...or thirty (ha!)," she snarks, it's not reason to give up. Regina tells her she can come back from being a baddie.

Zelena doesn't look like she's buying it. She hands over the slippers, but she plans to stay in Underbrooke and drink. The others, meanwhile decide they're going to look for Aunt Em. If they can bring her back to Oz, she can wake Dorothy with True Love's Kiss.

Flashback now to Oz just after Zelena was banished there. Zelena threatens to off Toto if she doesn't get her slippers so she can get back to her beloved Sweetpea. Mulan, Red and Dorothy come up with a plan.

Dorothy takes Red to the poppy field so they can make sleeping powder and use it Zelena. Along the way, Dorothy gives Red backstory about her family trying to get her committed, because they thought her visit to Oz was all a delusion. Aunt Em was the only one who believed her. She gave Dorothy Toto, and he's her only friend.

Red lets her know that she had a rough time of it, too, having used her boyfriend as a chew toy. Red talks about looking for what's missing in her life, all while making deep, soulful eye contact with Dorothy, who stares searchingly into Red's eyes, as well. Please.

Dorothy apologizes for calling Red "Wolfie" and Red gives her the nickname "Kansas" as Dorothy picks her a flower and they stare entirely too long into each other's eyes.

In swoop the flying monkeys. Red turns into a wolf, Dorothy climbs on her back and off they run, having gathered only the one flower. When they get back to camp, it's clear that Dorothy's more than a little weirded out.

Ahead in Underbrooke, Auntie Em's tombstone isn't cracked or tipped, which means she's down there somewhere. They plan to bottle a kiss (I can't...how do you even...?) from Aunt Em and take it to Dorothy. David lets Snow know that they can no longer terrorize their child in the night, and Emma tells Snow and David to go home and take care of Neal. Unfortunately, Snow can't leave as long as her name's on the tombstone, so David is elected to accompany Red to Oz, then move on to Storybrooke.

Back at the farmhouse, Belle shows up to plead with Zelena to ask Hades to rip up the contract that entitles him to her unborn child. Then she gets all gaggy from morning sickness and then remembers that magic can speed up a pregnancy to match the actresses gestation period make it move more quickly. She worries that Hades will do exactly that.

Over at the apartment, Killian's looking through the story book trying to find out where Auntie Em is. David sits down at the table for his turn at self-flaggelation over his going and Snow having to remain behind. "It should be her!" he cries. Well, duh. Especially since he's not lactating. Killian thanks him sincerely for coming to his aid and David begrudgingly admits, "You've grown on me a bit."

The blind witch has been kind enough to direct Regina, Emma and Red to "Auntie's" which looks like Granny's but isn't because it's run by Auntie Em. They got Em to blow a kiss in the bottle, but Hades put water from the river of souls in the soup and she turns to a gooey liquid in front of their eyes. Hades bottles what's left of Auntie Em and reminds everyone that this is what happens when you cross him.

Back again to Oz and Red is feeling sad. She confesses that she knows what she's been looking for all this time. She's totally in love with Dorothy after knowing her for all of ten minutes, and Dorothy's freaking out about the wolf thing makes her feel crappy. Mulan reminds her that she's not a mind reader. Dorothy may not be feeling that at all.

"Don't make the same mistake I did," Mulan urges. "Tell her how you feel." Red goes to find Dorothy, but all that's left of her is a scrap of gingham.

Forward to Underbrooke, where Snow is talking to Red and guesses that (in true fairytale fashion), Red fell in love with Dorothy after six lines of dialogue and a jointly miserable past. She tells Red that what you get back when you love someone far outweighs the risk and encourages her to go to Oz and besmooch Dorothy.

David and Red get ready to head off to Oz, but at the last minute, David pulls the old switcheroo.

It turns out Killian did his bro a solid and since Hades enchanted his hook to do so, he scratched David's name on the tombstone after crossing out Snow's. Snow is now going back to her beloved, terrorized, previously abandoned baby.

"Will you look in on Roland for Robin Hood?" Regina asks, so the writers can make everyone look suitably parental. Hey, where is Robin anyway? I guess there's a lack of babysitters among the dead.

Down in the depths, Hades is sniffing his jar of Auntie Em ooze when Zelena shows up. He makes a gift of Aunt Em's soul, to show how selflessly he'll kill on her behalf. They share a toast to Dorothy's eternal slumber.

Over in Oz, the munchkins are gathered around Dorothy's body, and Red moves forward to give her the smooch of love, even though Toto is standing right there and has been Dorothy's constant companion and only friend for years. Of course, it works on the first try. Dorothy wakes up and admits she got wigged out before because she, too, fell instantly, madly in love with this person she didn't know half an hour before.

Then they do this. I think there was tongue and everything. Good on ya, ABC, for letting two girls really get their kiss on.

And that big old smooch is now part of the Storybook. Henry runs down the stairs with another fresh page, that shows Snow is with Neal.

Back at Gold's Belle has received a portable spindle of some kind from Zelena and she's going to voluntarily go under a sleeping curse to protect the baby and keep Hades from taking it. She tells Rumple to find her Daddy to wake her since he's incapable of light magic and bringing her back. And over Rumple's protestations, she pricks her finger and out she goes.

Oh, where to begin.

I'm giving this one three phoenixes out of five.

I loved the bro moment between Killian and David, loved that Regina seems to be getting through to her sister on some level, and I loved David making the sacrifice play to send Snow back to baby Neal. But Belle seems kinda unhinged (maybe it's the hormones) and UGH. I'm sorry. But Dorothy and Red have zero chemistry. It felt so damn forced. There seemed to be more of a genuine spark between her and Mulan, and I'm not happy that didn't get explored. And poor, sad Mulan. Will she always be denied true love? Maybe they have plans for Philip to die off or Shang to show up or something. I hope so, for her sake.