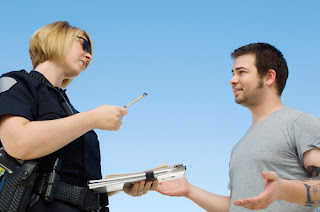 One of the many worries I have as the parent of a child on the spectrum has to do with David's lack of communication skills. He has a hard time comprehending any large chunk of conversation - his mind has to digest all the words being thrown at him and then he has to decide which words you want him to act on.

If he has to do this at a time of stress or anxiety, it becomes all the more difficult. David also (like many people on the spectrum) has no filter when it comes to the things he says. He can sometimes be inappropriate without even realizing that is.

All it would take is David being in the wrong place at the wrong time answering pointed questions the wrong way, and he could be staring at an officer who's ready to take action.


I come from a family that has a background in law enforcement (on my father's side), so I've always grown up seeing cops as the good guys. I still see that, but I'd be lying if I didn't tell you I'm worried about my son in a situation like that.

And that's why Dennis Debbaudt put together an Autism Risk and Safety Management program for police officers. Dennis is the father of a son with autism, and began his efforts on autism education for first responders in 1994 with a report titled Avoiding Unfortunate Situations. He has since authored a book and written numerous reports, produced training materials and videos and worked intensively with any first responder (police, fire, hospital staff) who might have to deal with an autistic individual during an emergency.

Here's an example of one of the field training exercises he's developed:

If you are in law enforcement or any other form of public service, and would like to know more about Dennis's programs (or would like to have him speak), his website contains all of the information you need.

You can also find the autism education cards shown in the video here. They come in packs of 100, so if you're a parent looking to get this for your child, maybe you can reach out to other spectrum parents and go in on a pack. Dennis's website also has a lot of information for autism parents regarding emergency preparedness and police interaction with your autistic child.

I think this is an intelligent and incredibly helpful program. Learning how to interact and communicate with autistic individuals will save time, frustration, and reduce misunderstandings that could lead to escalated situations. Here's hoping this program spreads far and wide.