Once Upon A Time - Season 5, Episode 15: The Fallen And The Forgiven 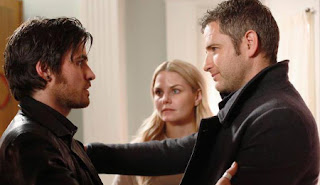 Tonight we start with the Cruellamobile, racing along the streets of the Underworld, and Henry in the passenger seat, having sneaked out without anyone noticing he's gone. The kid has not one, but two mothers, he's in hell with horrible people who want to harm him, and nobody seems to notice he's out and about. Alrighty, then.

They're racing along looking for a signal, because according to Cruella, Henry (as the newly crowned author) can sense the broken pen. Like a horcrux, or something. They pull off and trudge through the woods, and the Apprentice suddenly appears to warn Henry about resurrecting Cruella.

The apprentice cautions Henry that he's merely a recorder, not the person who should be writing the stories. He tells Henry to get the key from the sheriff's office and head to the Author's mansion, where the quill will be hidden. The only way he can move on is if Henry makes the right choice. But no pressure, Henry.

Meanwhile, over at Emma's Underworld house, she gently leads Killian to the couch to tend to his battered face.

"Hades knocked some of the handsome out of me," he tells her.

"No one's that powerful," she quips, then uses her magic to heal him. Just as she's about to go in for the lip-lock, Killian pulls away and thousands of Captain Swan shippers gasp in abject horror.

Killian is rolling in self-loathing because he turned dark so quickly as a Dark One and she only turned dark for love. He's angsty and brooding and raw sex is dripping off his floofy eyelashes and running down that angular jaw when suddenly, there's a knock at the door and surprise! It's Liam Jones.

Flashback now to the brothers Jones, long ago in the Enchanted Forest. This is pre-Neverland, and they are almost at the end of the servitude their father sold them into. Liam points out that with a navy commission they can pay off the last of their father's debt. Liam leaves to go collect the money, leaving Killian behind as collateral with Captain Silver.

Forward to the Underworld again, and Liam joins Killian and Emma for a glass of water. Guess Emma forgot to stock the Hell house with coffee. Liam mentions that Hades can be overthrown by a book that has the power to defeat him, and Emma realizes there's an Underworld version of the Storybook and they need to find it.

Snow looks through her underworld closet and doesn't find the book. Liam, meanwhile pulls Emma aside and tells her that it's basically her fault that Killian's down there since she deprived him of a hero's death. He doesn't think she deserves his little brother, and he thinks she needs to just let him go, already. Emma calls him self-righteous and gives as good as she gets. Atta girl, Emma!

Henry shows up at the apartment and lets everyone know the Apprentice paid him a visit (but doesn't mention Cruella, of course, or the fact that nobody gave a rat's ass that he fell off the map in hell for awhile). He thinks the book is in the Author's house, so David decides to raid his brother's office and Snow mentions offhandedly that his brother does this really funky thing with his tongue when he kisses, causing David to do a major double-take.

Flashback to Liam showing up at Captain Silver's ship to free Killian, only to find that his brother has allowed Captain Silver to get him drunk and he's foolishly gambled away his money. Captain Silver advises Liam to cut his losses, but Liam rips up the navy papers, refusing to leave Killian behind.

Forward again, and we watch as Hades shows up at Liam's underworld bar, and pours Liam a drink.

Hades knows all about the potential mutiny, and of course, he finds that mildly amusing. He wants Liam to get the storybook and destroy the pages that concern tell his story.

"Then I'll tell your brother the real reason you're down here," Hades threatens. Ooooh, ominous. Sounds like our self-righteous prig of a brother has some dirt under his nails.

Across town, David and Snow are rummaging through the Sheriff's office when Cruella shows up bearing champagne and a raging need to feed the two-toned monster downstairs. Snow runs off while David pretends to be James. Cruella plants one on him and it's clear James has been Cruella's naughty playtoy.

Over at Granny's, Emma and Regina are knocking back coffee as Emma lets Regina know that Liam isn't welcoming her to the family. Regina makes a rude noise and then offers some sage advice: Liam can get stuffed, and Killian is having a hard time forgiving himself - a feeling she can totally relate to.

Flashback to Captain Silver's ship heading into a massive a storm. Liam and Killian are furious that they're steering right into it, and Captain Silver lets them know that they're going after 'The Eye of the Storm' - a mythical stone that many sailors have perished trying to get. Liam has had enough and leads a mutiny, overthrowing their foul captain and taking over the ship.

Forward again to the Underworld, and Emma suddenly remembers she's a mother and tells Henry he's going to be out of the action while they all look for the book. Henry objects and Regina snaps at him to "listen to your mothers." As soon as they're all out of sight, Henry starts looking for the horcrux pen. Meanwhile, Liam finds the book, locates the pages about Hades and rips them all out.

Over at the Sheriff's office, David is trying to play along with Cruella, who pulls out the handcuffs and suggests some extra fun. David blows his cover, but Cruella is wise to the game, and knew he who he was all along. She lets David know that James' unfinished business is his brother, and the fact that his mother chose to keep David over him.

Back again to Captain Silver's ship (which is now Liam's ship). Hades shows up right after the mutiny to looking dapper as ever (despite the ludicrous hair) and offers to make a deal with Liam. After all, mutiny isn't going to look great on his record if he wants to become a navy captain. Hades wants all the fresh, new souls on the ship, and If Liam agrees to let the ship sink, he promises to let Liam and Killian survive. He'll even throw in 'The Eye of the Storm' - knowing that if Liam delivers it to the king, he can ask for that navy command. A short while later, Liam gives Killian the infamous ring, telling him he's sure that they will survive the storm.

Forward to the Underworld, and Liam tosses the pages down a wishing well behind the apprentices property. Emma shows up and calls him on his BS, telling him that she knows he's lying. Killian shows up and takes Liam's side once again, then he tells Emma that maybe it's time he should move on instead of going back with her. Emma begs him to forgive himself, holds her head high and walks the f**k away.

Killain sees the ink on Liam's hands, realizes Emma was right and confronts his brother about his lying. Suddenly, out of the shadows walk the sailors that Liam apparently sent to the depths of hell to save himself and his brother.

The dead Captain Silver tells Killian he overheard Hades and Liam's conversation at the Underworld bar, and now that they all know their deaths were Liam's fault, they want some retribution. Liam and a highly disillusioned Killian get dragged to the edge of the fiery pit. Hades shows up, tosses Captain Silver into the pit, then decides to drop-kick Liam, too, when he tries to protect his brother. Killian grabs Liam before he can go all the way down, but Liam lets go, paying the ultimate price, which allows him to move on.

Hades freaks out and goes up in horrific CGI blue flame (come on, it looks cheesy as hell when they do his hair), leaving all those souls untended, and without recapturing Killian, whom he just admitted he was really pissed to lose. Something tells me Hades isn't so great at ruling Hell.

Anyhew, Liam moves on to the glorious blue seas of the afterlife, which he totally doesn't deserve after the turd thing he did. He's deliberately rocking side to side in the boat on a CGI sea that isn't rocking with him, which makes him look ridiculous.

Killan tells the other sailors to get on board, sending all their souls away. Liam tells Killian to stop idolizing him and have a great life, and Killian decides to stay, since he's still got unfinished business until he and Emma defeat Hades.

Flashback to Killian and Liam arriving on the shore that fateful night after their ship goes down. They encounter the captain and crew of "The Jewel of the Realm" (a.k.a. "The Jolly Roger") and when Liam shows him "The Eye of the Storm" he offers them commissions on the ship. Killian thanks his brother and vows to be a better man.

Forward now to the Underworld, where Killian shows up to eat his crow dinner and thank Emma for coming to get him. He tells her that he plans to go back home and live happily ever after with her, and then he smooches the bejeezus out of her. My toes were curling on that one. Damn.

Henry found the pen and the inkpot in the Author's house. He sequesters himself upstairs at the apartment, telling his Moms to leave him the eff alone. David shows up to talk to the sullen teen, who whines, "Please don't make this a lesson." David reminds him that he's got a family who loves and supports him and that's pretty much all it takes to snap Henry out of his forty-five seconds of rebellion.

Henry shows everyone the pen, letting them know that Cruella tried to guilt him about Emma's role in her death and he went after the pen so he could feel like a hero. He realizes the Apprentice is right - he's there to record, not change. He is going to use the pen to recreate Hades' story, and the group is now determined to find out what it is that Hades doesn't want them to know.

Down in the depths, Hades finds the torn pages, and as we see a picture of him and a certain wicked someone. He leaves us with, "Zelena, our secret remains safe...."

The Jones Brothers backstory bothers me. The Killian Jones we met before Neverland back in season three was as straight-laced and wide-eyed idealistic as a young man could be, which doesn't jive with a backstory of someone who worked off his indenture under a smarmy pirate, drinking and gambling his damn life away. Even if he'd turned over a new leaf, he'd still bear the weight and savvy of those experiences. It just doesn't fit. And I don't like mass-murdering, self-righteous Liam Jones. Talk about trashing a legacy.

I'm going to give this one four phoenixes out of five only because it sort of seemed all over the place.

I loved David and Cruella, and I LOVED Emma in this episode - it was like having Season 1 Emma back again. But I don't know these Jones brothers, and honestly, I kinda wish I'd never met them. I don't think they added much to the narrative.
By Ellie DeLano - March 28, 2016