Once Upon A Time - Season 5, Episode 13 Recap: Zero To Bandit Hero 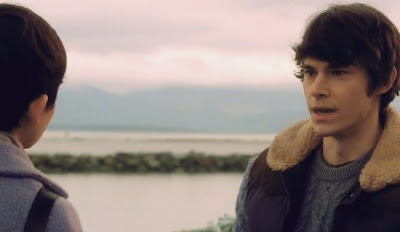 Tonight, we begin by heading down to the depths of hell where we finally, finally (!) see our beloved pirate, looking gorgeous despite his battered and bloody face.

A young woman (who has to be Meg since we know we're meeting Hercules this episode) warns him against escaping due to the three-headed dog lurking in the shadows. Hook valiantly distracts the monster so that she can get away but not before he begs her to find Emma and tell her where he is.

Up on the surface, Snow is on a casual stroll through the Underworld graveyard and notices so many graves from her father’s kingdom. She’s feeling like a failure for not having protected them. David asks her to help Emma track, and even invokes the name of Bandit Snow to get her to agree.

On their way out, Snow spies a headstone that she find especially troubling: Hercules. Apparently, Herc is a mysterious man from her past and now she’s determined to find him and help him finish his business. “If we save him he can save us,” she tells David.


Flashback to young Snow and Regina. There’s a bandit terrorizing the kingdom and she’s too milquetoast to know what to do so she runs off into the woods and falls right into a hole. She’s lifted out by none other than young Hunkules Hercules in an stunning display of strength and youthful puppy love.

He volunteers to train Snow and turn her from zero to hero and deal with her bandits. We find out that Herc’s got one more labor to complete before he can head to Olympus, and that labor happens to be defeating Cerebrus.

Back to the Underworld where Emma and Regina are searching the woods and Robin and Henry run off to search the Mayor's office to find a map of the Underworld. Emma finds a leaf splashed with blood and somehow knows it’s Hook's, but finds Meg instead.

Regina, Emma and Meg go on to Emma’s old apartment and find it empty, but apparently waiting for her Mom and Dad to take their place in hell (and that doesn't bode well, does it? Sounds like we'll be on a mission to prevent Mom and Dad from fulfilling that prophecy before the season is over). Meg tells them where to find Killian and all about the horrible beast that’s guarding him. Snow shows up and channels her inner bandass, vowing to take that beastie down. (Really, all she needs is a harp. Puts 'em right to sleep. I should not have said that.)

After a tip from the blind witch, Snow tracks Herc down at the docks. Snow begs him to find his inner hero and face the beast that sent him to hell. Herc seems a little wary, but finally agrees.

Back down to the depths of the Underworld again, and Killian’s looking worse for wear (but still devilishly handsome, of course). Good God, they’ve torn his leather! He vows to kill Hades (the leather alone is a killing offense) but Hades reminds him that he’s not exactly killable, being the God of death and all.

On the surface, Henry and Robin head to the mayor’s office, which is covered in a protection spell. That doesn’t stop Robin from pulling off a vent, which Henry promptly crawls through only to find Cruella waiting on the other side. She’s still not over that whole Emma blasting her off a cliff thing.

Cruella asks for Henry's help to get back to the real world. With Henry being an author he can change her fate and write her back to life. She tells him the magical quill is a living entity and when he broke it he killed it dead and sent it to hell.

She tells him to find the quill and write her back to life, because saving her saves Emma from being a murderer. Henry leaves to rejoin Robin, and he doesn't breathe a word of his meeting with Cruella.

Over to Cerberus now, and Hercules is looking kinda nervous as he heads down the mine tunnel to confront the beast. He drops his sword and runs, cowering behind the women, when suddenly, out strolls Hades.

"Why does this hell hole look like Storybrooke?" Regina asks.

"I have my reasons and I don’t have to share them with you," Hades explains for the writers, who have to make sure the story falls within budget parameters.

Hades threatens to go after Snow’s family if she interferes between him and Herc, then he delivers the pièce de ré·sis·tance to Emma: a bloody hook.

I am loving Hades. He is so deliciously smarmy in a way we haven't seen since early Rumple. Oooooh. He's beautiful.

Flashback to the Enchanted Forest where we see young Snow trying to put on a brave face as she confronts the bandits. She drops her arrows all over the place, causing the bandits to laugh but young Herc punches the ground and puts on a booming thundergod voice, telling the bandits to leave her alone. They leave, mocking her as they go.

It turns out the bandits are in evil Regina’s employ. She’s trying to undermine Snow by making her look like a whining twat in front of her people.

Back to the Underworld, and Snow is sitting on the bed, overcome with self-doubt and ready to throw in the towel.

Regina can't believe the symbol of hope has lost her way and administers a really wonderful and poignant pep talk, reminding Snow that she's faced evil before. “You defeated me by making me your friend," she tells her, "By never giving up on me.”

Then she gives voice to what so many of us have known for so very long: "Mary Margaret can’t help. We don’t need her anymore. We need Snow White."

Flashback again to the Enchanted Forest, where young Snow is thinking about abdicating and leaving the throne to Regina. Herc reminds her that no one wins every battle. He confesses that he nearly failed in his first quest, but learned from it.

The next day we see the bandits terrorizing a village. Young Snow is now in full bandit gear, but overnight (literally), she’s become a crack shot with her bow. The villagers are inspired by her, and decide to do something with the pitchforks they’re all holding, and back her up.

Herc is off to his next adventure, but not before planting one on young Snow, who has opted (in a completely selfless act considering his hottitude) to stay with her kingdom.

Forward to present-day Snow finding Herc down at the docks (where it appears to be his job to move heavy stuff around all the time). She throws his sword at him, telling him that together they’re going to defeat that tri-headed, sub-par CGI dog.

Back at the apartment, Cerberus has decided to drop in – literally, sending Regina, Emma, David and Meg running.

Whimpering Meg cowers down behind the clocktower, proving she’s a far cry from the snarky, confident Megara we know and love in Disney canon.

Snow and Herc show up and end up getting trapped in Granny's with Meg. Snow hands her a dagger (while Meg sobs and shakes). Herc rips off a piece of pipe as Snow nocks her bow, and Cerebrus charges in. In an instant, Meg turns psycho and stabs the dog with enough force to drive the blade clean through skull bone, all while screaming like she’s batshit frosted banana muffins.

Herc introduces himself, and we suddenly flashback to their previous meeting. Apparently, Herc tried to save her before he faced Cerberus down, but she done got et right after he did. Sparks begin to fly between the two, as David and the gang look on from the other end of Granny's counter.

Snow begins to wax philosophical, and I have to know: why is Snow wearing so damn much copper eye shadow? Does it read better under the sepia and red filters? Is it part of her Underworld penance? Holy cow, did they ever cake it on. Anyway, blah blah blah, she's tired of being Mary Margaret, and she wants everybody (including her husband, who ought to know her damn rightful name by now) to call her Snow.

Herc and Meg move on to Olympus, and the clock ticks another minute down as we watch Hades torturing Hook. With a soul-chilling smile that doesn't quite reach his eyes, he hands Killian a chisel, points him toward some blank headstones and tells him that for every soul the heroes free, one of them has to stay - and he's going to make Killian choose which ones. Ooooooh. Eeeeeeevil.

Hades was hellish, Herc was a hunk, Hook was a bloody hunk (Ew. That doesn't sound as good as it did in my head), and finally, FINALLY we see the return of Bandit Snow. Let's hope she sticks around.

Season 5, I'm liking where you're going. Don't blow it.