Book Excerpt And Giveway For "David And Me Under The Sea" 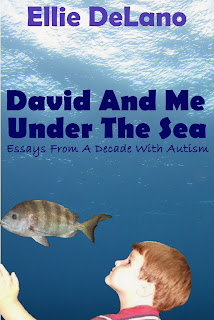 Yes, you read that right! April 2nd is World Autism Awareness Day, so this Saturday, David And Me Under The Sea will be a FREE Kindle Download at Amazon.com!

David And Me Under The Sea is a chronicle of ten years of life with autism, and how profoundly my son's diagnosis has changed me - in many ways for the better.

Here's a little excerpt - a chapter about expectations and growing out of them.

When we first started coming to the playground, he wouldn't play on the equipment. He only wanted to climb up on the bench, walk its length, and then jump back down. He couldn't step up by himself, so I had to be there to hold onto as he pushed himself up
.


Other parents would look at him quizzically at times - perhaps wondering why the bench had more fascination than any of the six slides, the bridge shaped like a fish, the geometric climbing steps, or the platform that looked like a giant frog. I tried to put him on the swings, but as soon as he began moving, he screamed. He didn't like to feel off-balance. He liked the bench, though.

A year or so later, he was letting me push him in the swing. In fact, that was all he wanted to do. He loved the feeling of the air across his face; his head tilted back, eyes closed with ecstasy. He needed me to help him up into the swing and back down again. Parents sometimes looked at us oddly - he was way too big for the baby swing, but if I put him in a regular swing he got so intent on feeling the wind he forgot to hold on. I learned quickly that this was only one of many times I wouldn't be able to hold him up and keep him safe, so back in the baby swing he went.

Eventually, he noticed the rest of the playground. He could climb the stairs now, and actually swatted my hand away if I tried to help him instead of letting him hold onto the railing. He discovered the joy of the slides, especially the one that curved around like a cyclone. I'd hide near the bottom and scare him as he came down - he loves to be scared like that. Of course, he didn't realize I stood there because the slide was kind of high up and I wanted to be there in case he needed to hold my hand while he jumped down.

He discovered the geometric climbing shapes next. He could pull himself up on the first one, but need to hold onto my hand to climb the rest. They were higher off the ground, and he didn't trust himself yet. Once he made it to the platform at the top, he'd cheer and do a happy little dance. If the other parents thought he was a bit silly for a kid that big, they didn't say anything. Or maybe by that time, it was apparent he was 'different'. Like most children with autism, he found it difficult to communicate with the other kids at the playground, so he rarely did. Or he'd say hi and then wander off. No matter what, though, he always stayed close to me, running over frequently to hug me or calling my name if I stepped out of sight even for a moment.

A few weeks ago we went over to the playground again, and I sat on the bench and watched as he made friends and played tag for a while with the kids that were there. I didn't see him for a bit and got up to find him - he was climbing the geometric shapes all by himself. He hasn't needed me there for a while now. He called out to me as I approached, pointing and breathless in his excitement.
"Mommy! These are hexagons!"

I looked down, and sure enough – they were hexagons. I high-fived him, grinning widely. He has an aide by his side every day for three hours in his class, along with special sessions with a learning support specialist, a speech therapist and an occupational therapist to work his fine motor skills. Somewhere in the whirlwind that his day must be, he learned geometry and figured out how to apply it, as well. He never ceases to amaze me.

A few days ago, we were back at the playground, and I was pushing him on the swing - he holds on just fine now. I started playing a favorite game of his. You substitute the wrong word for something he knows and he loves to correct you. Like, you tell him the cat is a potato or that he's wearing a shirt on his legs instead of pants.

So David was swinging and I decided to play with him a bit. I said "David, are you going to go climb on those pentagons over there?"

Then I said, "Are you going to go climb on those octagons?"

He laughed and said again, "NO! They’re hexagons!"

Then I said, "Are you going to go climb on those polygons over there?"

And he replied (after a short pause), "A hexagon is a polygon, Mom."

I'm a bit embarrassed to say that it took me a moment before I realized he was absolutely right.
And with that, he jumped down from the swing, laughing and shouting and scrambling up the hexagons without a backward glance at me, and without a need for my hand to guide him.
He's finding his own way just fine.
By Ellie DeLano - March 31, 2016