Keep Calm And Be A Mom 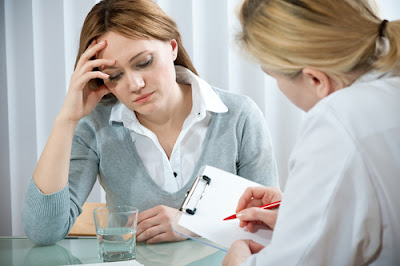 When my daughter was four months old, she got a very, very bad cold that settled in her chest. It was an incredibly hot and humid August, and she was just not getting better. I called the pediatrician in a panic because her fever still hadn't broken after three days and she'd developed a cough. They agreed to see her right away even though it was a Sunday morning.

The doctor on call was this petite no-nonsense woman, who listened to Anna's breathing and ordered me across the road to the hospital for an immediate chest x-ray. We got the result back and I stood there terrified as she told me my daughter had pneumonia. It wasn't severe enough for hospitalization - we caught it early, thank goodness, and she detailed for me the medicine she was prescribing, the side-effects, other things I could do to ease her cough and help her congestion, etc.

I stood there in silence, nodding and paying close attention to everything she said as I held Anna close, and after giving me a huge spiel, the doctor looked at me very seriously and said:


"Now I need to ask you a question. "
"Okay," I replied.
"Why aren't you more worried?" She gave me a very stern look. "This is your daughter and pneumonia can be very serious."

I was gobsmacked. "I am worried," I sputtered. "I'm very worried. But freaking out isn't going to help. I'm trying to pay attention to what you're saying."

She reiterated again the seriousness of all of this and sent me home with Anna and a prescription for an antibiotic. I got out to the car, buckled Anna in her car seat and cried so hard I didn't think I could drive home. I felt like the world's worst mother. Did I not look concerned enough? Was it my fault she ended up with pneumonia? It must be, if the doctor thought I wasn't responding properly.

By the time I got home, I was sobbing and miserable and so afraid for Anna that I was a total basket case. My ex (who was the husband at the time) listened to the whole story and he was furious. Who did she think she was! After I calmed down, I had to agree. Why would she judge me to be a poor parent for not getting hysterical and for paying close attention to a doctor's instructions? It was ludicrous. But it still stung.

In all the years since, she's remained with the practice, but I've managed to avoid her - until today. David just had a full re-evaluation, and his therapists recommended that he now have full physical therapy to address issues with balance and core strength.  In order to start the therapy, we needed a full physical, but the pediatrician had a three-month waiting list. I managed to get put on a list for cancellations, and today, they had one - with Dr. CrappyBedsideManner.

She was a little older, a little grayer, and still very no-nonsense as she examined David, asked questions about his eating and sleeping habits, and we discussed his autism and the various therapists he has working with him at school.

While I was trying to speak with her and she was trying to examine, David kept interrupting (he's having a serious issue with talking over people lately) and obsessing over the shots he'd be getting, so I was using various techniques to divert him and reinforce good manners, and they were mostly working.

At the end of the exam, she turned to me and said, "He's healthy, he seems to have a very well-balanced personality, and you have a lot of patience. You are really good with him."

I replied that he sort of taught me to be and she said, "Don't sell yourself short. Parenting isn't easy and special needs parenting can be very stressful and tiring. Your calm is exactly what he needs."

And with that, she strode out the door and I sat there mentally shaking my head. The very calm she's praising me for made me a lackluster parent fourteen and a half years ago. Go figure.

I'm guessing she learned a few things in fourteen years.

I've learned that the only ones who can define my motherhood were yanked out of my uterus through a slit in my abdomen. All others are just peripheral noise.

More like just an echo now, drowned out by belly laughs and arguments over broccoli and singing voices and fighting siblings and soft breathing in the darkness as I sneak in for a look before I climb into my own bed at night.

And I am one bomb calm mom.