It's The Little Things That Break Your Heart 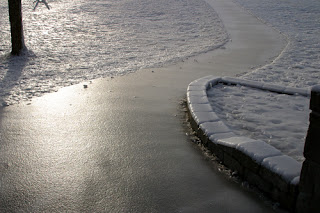 We had a snowstorm yesterday that turned to freezing rain. The kids were with their father for the weekend, and he brought them back after dinner.

I had shoveled and salted, but it didn't have much of an effect after several hours of solid sleet. My driveway was a skating rink (on a steep slant) and the sidewalk was a solid sheet of ice. I texted Anna to warn her and I kept watch so that I could help David when they pulled up.

Because David needs help on ice. A lot of help.

When he was seven, he broke his leg, falling on the ice in the parking lot of his daycare. It was a spiral break - especially painful, and it led to four weeks in a wheelchair and another four in a walking cast and a walker, since he couldn't get the hang of crutches. It was grueling, and understandably not a great memory for him.

Like most kids with autism, David fixates on things. If we order dinner and they send out onion rings instead of fries with his meal by accident, he will ask about the onion rings every single time we eat out. If it rained on his birthday one year, he's going to ask if it's raining every year on his birthday. And because his memory of breaking his leg is tied to pain and trauma, he is terrified of walking on ice.

Walking on ice means he will definitely fall and he will definitely break his leg. He's absolutely sure of it. And last night, the walk from his father's car at the end of the driveway to the front door was like crossing a tightrope over a lake of lava for him.

His father ended up carrying him most of the way, which was no easy feat since David is now 135 pounds, Dad was walking on ice, and David was squirming and flailing his arms in fear.

When he finally got in the door, he asked me over and over if there would be ice in the morning, when he walks to and from the bus stop. I told him no, but honestly, there probably would have been.

After I tucked him into bed, I was talking with Anna a few minutes before she went to bed, and I heard him. He was crying as though his heart would break so I went back in his room.

And once again, I reminded him that ice won't always make you fall, and falling won't always break your leg. I told him the rain would melt the ice (please let it melt the ice, I thought) and I told him he just needs to remember to go slow and stay calm. And I held him and calmed him and finally, he fell asleep.

His paranoia may not be entirely founded, but his terror is very, very real and bone-deep for him. I feel so helpless at times like this. His mind cannot grasp any other outcome, and I wish I could keep him off ice forever. The fact is, though, we live in Pennsylvania. He's got to learn to walk when it's icy. He's not always going to have someone there to carry him.

They called school off today due to the ice, and I breathed a huge sigh of relief. Today, he gets a pass. Today, he can rest easy. We'll fight that battle another day, and another, and another, until he walks successfully on ice enough times to take some of that fear away. But it'll never take it all away, I know.