When The Fire Alarms Go Off, A Lot Of Things Become Clear 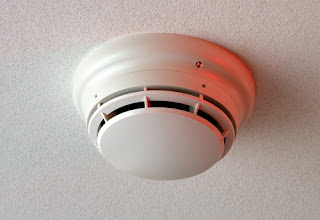 When my daughter was a baby and I was carrying her brother, the ex and I were jarred out of bed at 3am one Sunday by the sound of the smoke alarms screeching in the night.

We both leaped out of bed and ended up colliding as we both tried to get through the doorway of our daughter's bedroom. Once we'd figured out the issue (we'd been remodeling the basement and drywall dust had clogged the downstairs smoke alarm) and realized there was no real threat, we were able to laugh about the way we'd slammed into each other, both of us with just one thought in our head: save Anna.

Last night, at 11:30pm the alarms went off again, and I flew out of my bed in a panic, racing for their doors. And I promptly collided with Anna as we both tried to get to David.

And then David, in a full panic, shouting at the sound to stop and refusing to come out of his room until Anna and I managed to drag him out and down the stairs.

Once again, a false alarm (Thank God). Most likely the battery backup since the alarms are hard-wired and I haven't checked the backup batteries in ages. They'll all be getting changed today. Then again, the alarms are 15 years old and the average lifespan (according to the local fire chief) on the hard-wired ones is about ten years and then they start getting wonky, so who knows. I'm just glad we're all okay.

After we all settled back down, I was up for a good long, while making absolutely sure there wasn't any threat by walking the house repeatedly over the next few hours.

And then the realizations came.

First, we need to have some fire drills. David was so overloaded by the alarms and the startle of being woken from a sound sleep (and he sleeps like the dead) that he could have seriously put himself (and us) in jeopardy by his refusal to move. If that had been a real fire...

I don't even want to go there. So once a month, we drill, starting this week.

And the other realization is one every parent has to some degree at various times. It begins when they snap the baby into the car seat at the hospital and you drive away, realizing that this is it.

I am the one who's going to keep you alive, at all costs. I am the one who will take that bullet, swerve my side of the car into the impact, and toss them out to the waiting firefighters even as the flames lick at my back. I am solely and completely responsible for those two lives when they are under my care, and that is one sobering thought.

It's enough to keep you up at night, when they're sleeping over at a new friend's house, when their date brings them home late, when their problems become your problems and their sleepless night bleeds over into yours.

Or when the fire alarms sound, reminding you that this is it. Their one life. And it matters more than anything.