Inquiring Minds Want To Know: What's The Worst Christmas Present You Ever Got? 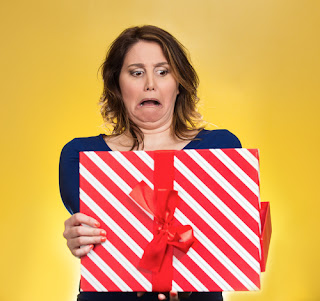 We've all gotten a present that's gone wrong, haven't we?

I'm not talking about bad news like a death in the family or the diagnosis of a terminal disease at Christmastime - those are hardly "presents."

No, I'm talking about the well-intended gift that just ended up being a train wreck. The half-assed attempt that fell laughably short of the mark. Or worse, the one that was meant to be as awful as it was.


For me, it was my first married Christmas. In defense of my ex (can't believe I'm defending this), he wasn't a hugely romantic guy. His go-to gift was always jewelry, and I'd given him hell for it because I happened to be the district manager of a jewelry store chain at the time, and him spending money from our joint checking account on jewelry with a five-time markup when I could get it for just over cost with my employee discount was foolish in the extreme, so I essentially took his only gifting idea and left him foundering.

That particular year, we got married and took a cruise as part of our honeymoon package. We both came back from the cruise with a good ten pounds in extra weight, and I added another four on top of that heading into the holidays. So there I was, fourteen pounds overweight and bemoaning the fact that I needed to get my butt in gear once the holidays were over and start working out again.

So he went all-out that Christmas, and got me what he thought was my heart's desire:

A lifetime membership to Jenny Craig.

Yes, you read that right. LIFETIME.

I was fourteen pounds overweight, and the man bought me a lifetime membership to a weight loss plan. For Christmas.

He'd gone in to the center planning to buy me some kind of starter membership, and of course, patsy that he was, they talked him into the lifetime plan. Somehow, he thought it was a good idea to gift your new wife with a lifetime diet plan at Christmas.

I could give you a handful of others (ironing board for Valentine's Day, anyone?) but that would just read like sour grapes and honestly, I can laugh about it all now. Mostly.


What about you? What was your worst Christmas present?