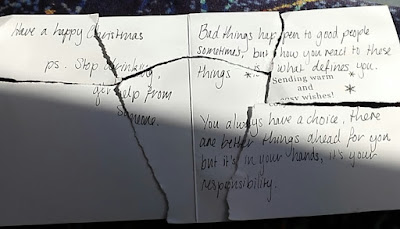 This was posted on Reddit this morning. Someone found a ripped-up Christmas card on a bus, and pieced it together before they took this picture.

Bad things happen to good people sometimes, but how you react to those things is what defines you.
You always have a choice, there are better things ahead for you but it's in your hands, it's your responsibility.
Have a Happy Christmas
P.S. Stop drinking. Get help from someone.

And the memories flash before my eyes of people I've known and loved.

The way my aunt Connie drank an entire bottle of vanilla extract in front of me with a shaking hand while she was babysitting me once. Not long after that, my parents decided I couldn't stay alone with her anymore. She died years later when she passed out drunk in bed with a lit cigarette in her hand and her house caught fire.

I had another member of my extended family who was a drug addict for decades. When he was sober, he was the nicest guy you'd ever want to meet. When he was high....not so much. We used to wonder when - not if - we'd get the call to come and identify his body. He's clean now (Thank God) but he's been clean and fallen back to it so many times, we all just keep our fingers crossed.

Whoever received this, I hope they read the love behind those words. The helplessness. The anguish. I hope they forget their anger soon and let the words resonate. But that's a longshot.

Or maybe they decided to deliver that message in person, with love, with tears, with a business card for a therapist or Alcoholics Anonymous clutched in their hand instead.

And to a busload of people, he or she was just another schmuck on their way to work, or home from work, trudging along and barely noticed. A nobody.

At least, until a ripped up Christmas card reminded all of us that everybody is somebody to someone else, and sometimes, somebody needs some help.