Once Upon A Time - Season 5, Episode 8 Recap: It Takes Two To Make A Thing Go Ri-ight 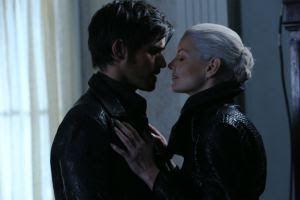 We begin tonight with David going to confront Arthur, who takes off running with Killian in hot pursuit. He manages to get the drop on Killian, but Emma steps in to save her boyfriend, throwing Arthur into a tree.

Emma's deep voice is seriously not sitting right with me. I mean, I get why she's doing it but it makes my throat hurt to hear it. Anyway, Killian is touched that she saved him and lets her know that he believes Emma is still in there and he wants to help her. He refuses to believe she's not dark for a good reason, and Emma drops the bombshell: "I'm doing it for you."

Flashback to Camelot, and Merlin shows up to let Emma know that Arthur has bound him to Excalibur. He tells her that Arthur is going to order him to murder her family if Emma doesn't ignite the ember and turn it over, along with the dagger. Merlin also cautions her not to seek vengeance on Arthur.


Ahead in Storybrooke, Killian is confronting Arthur in jail and Arthur claims he has no memory anymore, either. Killian tells Regina that Emma claimed she went dark for him and Regina believes she's lying to manipulate him. Emma needs another ingredient, and they need to figure out what.

Killian isn't getting anywhere with Regina, so he seeks out Rumplestiltskin for guidance. Rumple knows Emma's mind only too well - she's full of regret. "Find out what she's atoning for," he tells Killian.

Killian's stuck as to how to get Emma to listen to him, and Rumple mentions that he'd had some squid ink put aside, but Emma cleaned out his safe and took it. Killian's going to have to find some other way to get her attention.

Flashback to Camelot again, and dark Rumple is telling Emma not to fall into Arthur's plan, for the sake of saving all the dark ones. Emma can't get the ember to ignite, and dark Rumple tells her it's because she doesn't want to let go of the darkness yet.

Henry shows up to tell her that Killian is looking for a house for them to shack up in together, and shows her the newspaper ad for her new Storybrooke house, which Killian has circled. She tells Henry she needs to use the darkness one last time and takes off to find Merlin.

Oh look - Zelena's back in her wicked wear again. She's not green, though - and if she's in the magical realm again, shouldn't she be? Oh, there I go with that continuity thing again....

Forward to Storybrooke, where Zelena is reading to her unborn child and having huge cramps. She screams for Nurse Ratched, who brings Regina and Robin, only to discover that Zelena is now hugely pregnant, and she claims it's because of dark magic.

They run through the halls of the hospital with Robin telling Zelena to breathe. "Shut up! I was a fake midwife, I know the drill!" Zelena shouts.

Well, helloooo Dr. Whale, rockin' the Billy Idol look. It's so great to see him again - platinum blonde and super snarky. He remembers Zelena from when she tried to steal Snow's baby and remarks, "Why try to steal one when making one is so much fun?" Good to have you back, Whale. So good.

Belle rushes in with a book (as usual).

She explains that Emma's coming for the baby because she needs the cries of a newborn child to complete her spell.

Killian meantime, is poised on the top of the library, and he throws himself off, sure that Emma will save him, and she does. He begs her again to tell him what she did, and he vows to forgive her. He shows her his ring collection - each from a man he murdered in his previous, villainous life. Every ring is a sad story, he says.

She pulls out the ring he gave her in Camelot, and he tells her that one is different - it belonged to his brother, Liam.

"All sins can be forgiven when someone loves you," he tells her. And then he finally, finally says "I love you," (thank you!). Emma tells him there's something she needs to show him, poofing them both to her house.

"The truth is tricky," she says. "You have to look for it." She makes him look through his periscope, hoping the sight of the sea will calm him, and then she shows him the newspaper and tells him that he picked out the house. "If you knew what I was really after, you'd do everything in your power to stop me," she tells him, just before they start macking on each other. Unfortunately, she's got on some magic knockout lipstick or something (Yay! Firefly reference!) and Killian hits the dirt.

Flashback to Camelot again, and Emma poofs to where Killian and her family are being held. She and Merlin start battling. He blows her off her feet and Arthur commands him to kill Snow. Emma urges Merlin to fight the darkness. He manages to keep it at bay long enough for Hook to get free and charge Arthur, who knicks his neck with Excalibur. Then he and Emma just stand around and watch Arthur leave with Zelena. Emma heals his wound (which looks superficial at best) and they hug as Emma says "Killian we did it." They can now reforge the sword and cut the dark magic out of her.

The group gathers at Granny's and Regina steps outside to give Emma some support as she tries in vain to ignite the ember. It's a very Swan-Queen like moment, at first. "No one knows the lure of darkness like I do," Regina says. "Is it wrong? Of course it is. But it's also human." Regina thinks if Emma's clinging to the darkness she's doing it for a reason, and she wants to know what it is.

She suddenly flips sh*t and grabs the dagger and commands Emma to tell her what she's afraid of. Killian and the others show up and get pissed at Regina for strong-arming Emma like this, and Emma takes off.

Forward to Storybrooke again, where Zelena births a baby girl as Regina stands watch with mixed feelings. Robin is the first to hold his little girl (with proper manly daddy tears in his eyes) and Emma shows up. She's not after the baby after all. She takes Zelena instead. Yeah!

(On a sidenote: what kind of heartless heroes don't let a woman hold her own damn baby after birthing it? I know she's evil but...damn. That's stone cold.)

And that was like, four minutes of show between commercials. What the hell, ABC. There were more commercials than show between the commercials, too. I realize you're milking this cash cow for all you can, but I'd like a little more show with my advertisements, if it's all the same to you.

When we finally resume, Hook wakes up on the floor of the basement, shackled and next to Zelena. She gives him the lowdown about Emma speeding up her pregnancy. Emma poofs in and finally tells him the plan: She's going to transfer the darkness to Zelena, then cut her down with Excalibur, vanquishing the darkness forever. That's why she sped up the pregnancy - so the baby could be spared. Killian's not thrilled with the idea of cold-blooded murder and he suggests they find Merlin. Emma tells him that Merlin can't help them anymore.

Flashback to Camelot, and Killian and Emma discussing the newspaper ad with the house. Emma's real fear - the one holding her back - is about her future. "The minute you take away the darkness, that's when the future begins," she says. Once again, she's doubting her own ability to love completely, noting how she only told Killian and Neal she loved them when her feet were to the proverbial fire. Killian tells her not to fear the future, plants his smoldering pirate lips upon her, and the flame ignites.

Yeah, mine did too, Emma. Mine did, too.

Forward again and Regina has decided to storm Emma's house and battle her. "No one hurts my sister but me," Regina says. Spoken like a true sibling. Snow and David are, of course, not thrilled with this idea.

Emma shows up and plunges Excalibur down in the front yard, creating some sort of protection spell or something - it's not really spelled out but there's a glow over the house.

Down in the dungeon, Killian reminds Zelena that his hook is still imbued with magic to rip her heart out, it can therefore remove Zelena's cuff. He decides to trust her (what the f---, Killian...) and after being freed, Zelena sneaks out the back way. Killian hangs around, determined to stop Emma from putting the darkness into anyone else. He starts rifling through the drawers and even removes a large painting from the wall, possibly hoping to find a safe behind it. Instead he finds the squid ink conveniently taped to the back of it.

Emma shows up and he uses it to immobilize her, but of course, Zelena didn't get away. She's been hanging around, and now that Emma's powerless, she stabs Killian in the chest. To his surprise - and ours - he doesn't die. Emma tells him she can explain, but Zelena (who obviously never lost her damn memories) offers to return his memories via dreamcatcher. Killian agrees and back we go, to see what really happened.

Emma begins to work the flame to reforge the sword and destroy the darkness once and for all. Suddenly, the wound on Killian's neck starts bleeding again out of nowhere because a wound from Excalibur can't be healed. It's also gotten tremendously worse since reappearing.

"I can't lose you," Emma cries. She's going to use the flame to free Merlin from the blade and tether Killian to it instead. Killian balks - he tells her to let him go. He tells her he's not as strong as she is and he'll be consumed by the darkness instead of battling it with her. He'll be happy as long as she's living and free of the darkness.

"That's not enough for me!" Emma screams. The darkness leaches out of Merlin and Emma pulls it back to Excalibur as Killian poofs away, coming up out of the Dark One vault. Emma turns dark at the same time.

So they're both Dark Ones now, and Killian is seriously pissed. Zelena removes the glamour spell that was hiding his name on Excalibur, and she asks him if he's ready to learn the rest.

"First we have to take care of her," he growls, narrowing his piercing, pissed-off pirate eyes at Emma as a tear slides down her face.

Oh, where to begin.

Questions:
I'm going to give this one three daggers out of five.

This was...off. Just...off. I was glad to see the explanation - I knew Emma was protecting someone - but so much doesn't really feel true to character to me. It was great seeing Whale again, though, and there were a couple of good, snarky lines, so....I guess we slog ahead and hope this makes more sense as it goes along. Right now? Not so much.
By Ellie DeLano - November 16, 2015