Once Upon A Time - Season 5, Episode 6 Recap: A Tepid Brew With A Side Of Mancandy 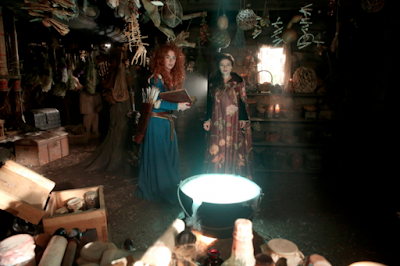 We begin tonight breaking into Arthur's prison in Camelot. The dynamic duo of Charming and Hook (that really ought to be a spinoff show when this one's done) are kicking ass and taking names. Merlin is there to break Lancelot out, but we find Merida locked up as well.

Belle (who came along only to carry a book, it seems) figures out how to open the magic enchanted bars on the cells by reading something out of the book. Merida insists on finding Arthur since he took her wisps but Merlin says they'll only bring her death and swears they'll find another way to rescue her brothers.

And that's pretty much the end of any exciting action in this episode. Seriously.

Forward to Storybooke now, where Regina informs Snow and company about Emma's slip regarding the fact that they freed Merlin back in Camelot. She suggests using the Crimson Crown to talk to Merlin, since she's figured out the communication spell that goes with the magical fungi. The problem is, Merlin will only appear to someone he's "chosen".

I would like to be chosen by Merlin. For whatever.

Belle suggests they use Rumple, since he's a former Dark One and she gets shot down. David thinks they should talk to Arthur, instead.

Off in the woods, Rumple's in an encampment bound up and sobbing over his chipped cup. He whispers an apology to Belle before he shatters it, using one of the shards to saw through his bonds.

Flashback to Camelot/Enchanted Forest again, where Merida gives Belle a shot to the head, kidnaps her, and forces her into a boat. After all that, she shoves a spellbook at Belle and pleads with her for help with rescuing her brothers. Belle, ever the pushover, agrees.

They pull up to the abandoned witch's cottage, where Belle uses the spell book to activate the witch's cauldron. It shows them that Merida's former suitors, Macintosh, MacGuffin and Dingwall have amassed an army and they're going to execute her brothers by sunset if she doesn't relinquish the throne.

Merida begs Belle to use the Bear transformation spell and help her change her fate. Belle reluctantly agrees to help her. She watches Merida splitting arrows, and tries to talk her out of turning herself into a bear. "You don't need magic to change fate," Belle tells her. "You can make your own fate." Merida scoffs at that.

Forward to the forest outside Storybrooke where Merida discovers that Rumple has freed himself. Emma shows up and decides to put Merida up to killing Belle - hoping that by threatening her, Rumple will have to get brave to defend her.

Now we go forward to Belle in the town library trying to figure out where Emma could have taken Rumple, when he bursts in through the elevator.

He gives Belle a schmaltzy lovey speech and thanks her for giving him a reason to hang on when he was in his coma. Only Bobby Carlisle could take some of these cheesy lines and still make me feel them, I swear. Anyway, Rumple figures out Emma's game and knows that Belle is in danger.

Across town, we see mommy Zelena reading "What to Expect When You're Expecting," which is simultaneously funny and puzzling because Snow only had a book from the 1950's for baby advice. Guess Storybrooke library held a bake sale and bought some new books. Lunch is delivered and it's a plateful of green, leafy healthy stuff thanks to the ironclad dictates of Regina. Anyway, in pops Emma and finally! This episode is getting interesting again!

Emma poofs Zelena away to her house, then uses her dark powers to summon onion rings. She's used her powers to take a heart and summon takeout, but not much more so far.

"What kind of trouble do you want to get into?" Zelena asks with a very knowing grin, and I am on the edge of my seat to see where this goes. Emma pulls out the apprentice's wand, which is really Merlin's. Zelena is the only one who's wielded Merlin's wand and lived to tell the tale. Emma offers Zelena her freedom in return for her help with the wand.

Zelena is intrigued, and applauds Emma's new darkness, pointing out that Henry isn't likely to forgive her ripping out Violet's heart. She also brings up Neal yet again, and I'm still saying this means something. I would love to see some more of Michael Raymond James.

Despite all the dark camaradarie (and why is that spelled with an "a" when "comrade" is spelled with an "o"? It's stupid and it looks stupid. Am I off on a tangent? I am, aren't I? I need to stop doing that...), Zelena refuses to take her deal. Emma tells her that she'll come around - after all, once that baby is born she'll need an ally and Zelena throws a wonderful verbal spear before Emma poofs her away:

"The difference between you and me is I don't mind being alone."

Ow. You know, I loathed Zelena in season three. LOATHED her. But damn if I don't love the hell out of her now and I am SO loving her and Emma playing off each other. Batshit crazy meets the ice queen. I hope they have a lot more time onscreen together.

Over at the library, Rumple's lame leg is reminding him that he's a coward. Belle reminds him that crushing your own leg in order get home to your family isn't cowardice.

They decide to go back to his shop, and just as he gets his walking stick, Merida shows up, and after telling him that Belle's fate rests in his hands. she starts firing arrows.

Merida breaks into the back room, where she sees Belle hiding with Rumple - who's too cowardly to stop her. Belle unleashes her big brass balls and pulls a rug out from under Merida, knocking her out. Rumple grabs something out of his safe and tells Belle he knows how to protect her, and they leave together.

Meanwhile, down in the vault, Regina, Snow and Hook are hanging around a bubbling cauldron, ready to start the communication spell.

Arthur shows up with David, and suggests that he speak with Merlin alone, and they all leave him in the vault. He tosses the mushroom on the fire instead, telling them the spell didn't work and Regina looks at him like this:

Night has now fallen, and Rumple is attempting to drive Belle across the town line. He's got a bag of magically convenient transformation powderTM that'll protect them as they go. She refuses to leave her friends behind to face danger without her and forces him to stop so that she can exit the car. Rumple confesses he didn't cripple himself to get back to Baelfire, he did it because he was scared. He's not going to change, and running is the only way he knows to protect her. Belle walks away and we see Rumple staring warily at the town line.

Belle unfortunately runs into Merida, who has the bear potion. She turns into an enormous not-entirely-bad looking CGI bear.

Flashback now to Belle and Merida who are about to rescue her brothers. Merida gives Belle some sure to be called back to backstory about a knight from another land (whose face she didn't see, of course) that killed her father after her arrow missed him. Belle talks about how she blamed herself for her mother's death, as well and tells Merida she can't dwell on that. Merida sticks out that chin and says "Let's kick some arse."

Merida drinks the bear potion, but nothing happens. Abs MacIntosh strides around in a manly manner as Belle confesses (to no one's surprise) that she switched the potion with water. She wants Merida to win this all on her own, otherwise the people won't respect her.

MacIntosh, MacGuffin and Dillhole Dingwall take aim at Merida's brothers, but she takes out their three arrows in one shot, defying the laws of physics and so impressing the hell out of the assembled men, they immediately throw down their swords and take a knee.

Merida proclaims herself their queen, and then decides to spare Abs MacIntosh, telling him, "You are lucky someone once taught me the value of mercy."

Forward to Storybrooke, and Belle is running from the Merida bear. She tries to reason with her when Rumple shows up and puts himself in harms way, getting jacksmacked and a face full of bear. He grabs his magically convenient transformation powderTM, and she becomes Merida again.

On a sidenote - Does Emilie de Ravin normally wear a wig? If so, it normally looks pretty good, but this episode, it's looking like a bad halloween wig, especially in the Enchanted Forest flashbacks. Not that Emilie de Ravin needs it. She could be bald with her head painted to look like a moldy potato and she'd still be outstandingly beautiful.

Rumple has now proven himself a true hero by saving Belle, and he, Belle and Merida head for Emma's house to confront her.

Flashback now to Granny's in Camelot, and Merlin is looking at the airline candy bars and reminding Emma of their encounter at the movie house.

Emma asks how it was possible that he visited her when he was trapped in a tree. "It doesn't matter," answers Merlin (and the writers).

"Leave Excalibur alone," he reminds her. "The fate of everyone you love rests on it."

Over at La Casa de Dark One, Rumple offers Emma a deal. He'll pull Excalibur in exchange for Merida's heart, and news about Merida's brothers. Emma shoves the heart back in, and tells Merida that her brothers are safe. Rumple reaches for Excalibur, but not before launching another cheesy speech about wishing he could go back and undo all that he was before. "I would change everything for you," he tells Belle, and my dumbass romantic heart squishes a little.

And in the only real surprise of the episode, he pulls Excalibur from the stone. He throws it at Emma telling her she's made a mistake. She turned him into a hero. She''s perfectly emotionless as he walks away.

Over in the vault, David finds the charred magical mushroom that didn't burn, and they all realize that they've been played by Arthur. Finally.

Regina realizes that they can use Henry to enact the spell because he was chosen by Merlin (as an author). Henry tosses the mushroom into the cauldron and Merlin's image appears with a pre-recorded message. "We're getting Merlin's voicemail?" Regina snarks.

He tells them that if they're calling him, it must mean things went bad with the Dark One. He then directs them to someone named Nimue. We close on Killian's grim face as he asks what Emma's done now. And maybe I'm just reading into this, but did he seem to know the name Nimue? It looked that way to me.

That was...bland. Great opening. Loved Emma and Zelena, and while I think the actress playing Merida is doing a slam-banging job, her storyline is boring me to tears. I'm just grateful it isn't taking over the entire arc like Frozen did.

I'm giving this one three snoozing bears out of five. And only because Merlin is so freaking sexy and I appreciated the writers throwing in gratuitous abs and a Scottish accent.


Any chance we can get Sam Heughan to cameo as Merida's shirtless cousin?