Once Upon A Time - Season 5, Episode 10 Recap: Everybody Dump On Emma 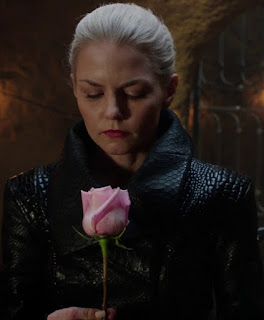 We begin tonight right where we left off, with Emma immobilized and Zelena cooing over a newly-made Dark One: Hook. In retribution for her taking his memories, he decides to take Emma's, and we'll just leave it at that and not address how it's possible that he's filled with all this dark magic and just had no inkling of it because he didn't remember. Welcome to the world of plot convenience, folks.

And in spite of that....holy damn am I loving the hell out of Dark Hook.

How is it possible that the man could get any sexier? How?? He seethes and I squirm.

Anyway, Zelena puts the magic-dampening cuff on Emma. She and Hook agree to stay out of each other's way, and Hook tells her with great relish that it "Feels like I've been reborn."

Flashback now to Camelot and the Dark One vault, where Hook is reliving every minute of the tortures he's been through, Milah, Rumple taking his heart, Emma going to darkness, etc.

He gets all wrapped up in evil spaghetti, and emerges in a robe. Dark Rumple is in his head promising to help him get his revenge. "You will finally do what you never could before," Dark Rumple tells him. "Why, kill me, of course."

Forward to Storybrooke now, and Snow, David and Regina go to Emma's house to find her. Emma finally tells them she turned Hook dark. Snow goes off on a pissy rant about Emma trying to murder Zelena and how premeditated murder is soooo bad. Hello pot? This is kettle! What the hell, Snow?

They all want their memories back, but that's problematic, since Hook took all the Dreamcatchers.

And now I'm just going to insert video. Not because I'm lazy, but because Colin O'Donoghue is SO FREAKING AMAZING in this scene. As sexy as Dark Hook is (and as much as I love it), it's even better that he's having so much fun with this. Here. Watch the scene:

After Hook leaves, the cadre of major characters get together to figure out what Hook's plan could be, and Rumple recommends that they start the search with "The Dark One Chronicles," which sounds like a post-apocalyptic YA novel but apparently it's a helpful book in the library, because we have to give Belle something to do that keeps her seated and behind a table to hide Emilie de Ravin's baby bump.

Emma asks Henry to take off her cuff and he says no because she lied to them. "I thought you were the one person I could trust," he sneers, and after dumping a whole lot of teenage contempt on her, he walks out on her.

Everyone else takes off to the library, and in a great callback to the return from Neverland and Regina, Emma isn't invited to the party.

Flashback to Merlin finding the entrance to the Dark One vault. They start tracking Hook but his tracks disappear. Merlin decides to go back to Granny's to prep for the upcoming confrontation with not one but two Dark Ones and oh, hi Lancelot! Didn't see you there. Did you know that Lancelot's mother is the Lady of the Lake? Wait wasn't Nimue the Lady of the Lake in the legend? Not that we have to stick to that but it's odd. Anyway, Snow suggests that Lancelot go talk to Mommy and see if she can help.

David decides to make good use of one of his three lines with great fabulous fury, fuming that Emma was seconds away from ending her darkness when it all went south. Snow says Emma acted out of love and reminds David that they share a heart because of love - which I can't help thinking is a plot point. That's going to come into play somewhere soon I think, if they're reminding us.

Somewhere in the forest, Hook gets out of his monk robes and back into his leather just as Emma shows up. She tells him she wants that house in the 'burbs and he says he loves her - which makes Rumple disappear. "We can do this," Emma tells him. She thinks they can keep the darkness at bay by staying close to those they love.

Forward to Storybrooke, and Rumple tells Belle he's going to prep for battle. He wants to prove himself as a man of honesty and courage. If he wins, he'll be at the wishing well waiting for her.

Across town, Zelena goes to hospital and there's Regina. Baby Hood (who, I guess, is unworthy of a name) is gone. Regina tells Zelena she will never take the baby away and brings up the fact that Zelena, y'know RAPED Robin, actually calling it "vile". Great strides, writers, great strides. Zelena tells her she doesn't know how to stop being a baddie and Regina thinks she may know a way.

Over at Emma's house, Merida is guarding Emma, having been relegated to plot obscurity after last week's steaming pile of an episode. Hook shows up, stops Merida's arrow in mid-flight and smacks her away. 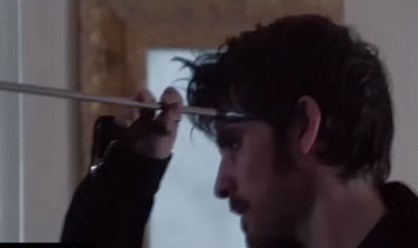 And then he reaches deep and unleashes the darkness, aided by the razor edge of his tongue. Damn.

Emma begs him to turn from the darkness and his vengeance.

"All you were was a pretty blonde distraction" he tells Emma, vowing that she'll never hold him back again.

"You push everyone away," he sneers at her. "That's why you'll always be an orphan."

He's so mean. And knowing her as he does, he can hurt her more deeply than anyone. He knows where she's wounded, and he spews the words into those wounds with the force of molten lava.

He finishes with: "I want to hurt you like you hurt me."

And then he bites his lip.

I need a drink. A tall, cold drink. And a blanky. I'm wounded and I'm incredibly turned on. Holy hell.

Flashback again to the two Dark Ones making out in the middle of the deep dark woods. They split up briefly, and Dark Rumple tells Killian that Emma has Excalibur and she lied to him about its whereabouts. Emma comes back and admits that she's been keeping it from him.

This makes Hook flip his shit, and he starts yelling at Emma for not believing in him and trusting him with the sword. He poofs himself away (with red smoke!) and I am really digging angry, magical Hook. Unff.

Forward to Storybrooke, and Emma asks Rumple to use squid ink on Hook, immobilizing him so she can find the dreamcatchers. He refuses, insisting on fighting Hook "like an honest man." Whatever that means. It's just squid ink, dude.

On the other side of town, Regina takes Zelena to Snow and David's apartment to see her daughter (I guess Robin is living there now - with no sign of baby Neal, of course). She tells Zelena that Henry's love made her be her best self and she's hoping the same will happen to her sister.

Robin lets Zelena know that she's allowed supervised visitation, because he and Regina are hoping the baby will bring out the best in her. Zelena seems genuinely moved by her daughter, and I have to admit she hit me in the feels when she called her "green bean."

Emma, meanwhile finds Henry and asks him for help. If Hook stole her memories and the dreamcatchers it must be because she knows something. She's finally realizing that she needs to rally her family and friends around her - going it alone is getting her nowhere. Henry's on board, and Operation Cobra part 2 begins.

Flashback to Camelot, and the field of Nimue's flowers. Emma grabs Excalibur and summons Killian - who is seriously pissed off that she's controlling him with it. She gives him the sword and begs him to work with her to get the darkness out. She promises never to control him again and tells him she loves him. They start making out ravenously and a thousand Double Dark One fanfics sprout in my head.

Forward to the Jolly Roger now, and Rumple has arrived. Hook decides to be sportsman-like and heals Rumple's limp. They start dueling and Rumple runs Hook through, but Hook drops him, after drawing first blood.

Hook smiles down at him and tells him jauntily that if he'd fought like that when they first met, he might have given his wife back "soiled, but returned."

Somehow Rumple manages to get the drop on Hook, but he takes the high road, refusing to kill him and choosing to let Hook live with the knowledge that he'd been bested. Hook poofs away, leaving Rumple with Excalibur.

Meanwhile, Henry uses the squid ink to remove Emma's cuff, after they find the dreamcatchers. Because squid ink does that, apparently.

Flashback to Camelot as Emma and Hook arrive at Granny's. Hook goes inside to find Merlin, who is busy leaving his magic mushroom voicemail. Hook tells Merlin that he's taking his vengeance, but needs to get back to Storybrooke. He takes Merlin's heart because Nimue still loves Merlin, and since all the Dark Ones are a part of Hook now, Nimue is going use Hook to crush Merlin's heart and cast the curse.

Emma busts in on the scene, and tries to remind Hook that she's his happy ending, not the revenge he seeks. "Killian Jones told you that," he sneers. "That man died when you turned him into a Dark One." He casts the curse and crushes Merlin's heart.

Emma dissolves Merlin's body with a throaty "Rest in peace." Then she takes Killian's memories and everyone else's, hoping that what he (and they) don't know won't hurt any of them. "Why trust your family?" Dark Rumple asks, encouraging her to try to handle it all on her own.

The curse sends Granny's back and sweeps Merida, Arthur and the others along for the ride.

Forward to Storybrooke, and Rumple meets Belle at the well. Instead of a happily-ever-after sort of triumphant reunion, Belle tells him that he's effed up too many times and despite his newly pure heart she's just not feeling the chemistry. She leaves him sad and broken, and the rest of us scratching our heads.

Over at the water's edge, Nimue is greeting Hook. "Congratulations," she says. "You returned from your duel with the second half of the plan. The blood of a man who's been to the underworld and back." Nimue summons the boat to the underworld, pointing out that she's brought all the Dark Ones along. Together, they're going to snuff out the light.

And we end with a darkly grinning Hook, steaming the panties right off my damn body.

Okay. First of all....
I'm giving this one five dark, dark hooks out of five.

Dark Hook is everything I never knew I needed and oh, I hope he sticks around awhile. At the same time, he's tearing me apart. So much good, steamy angst. I need a cold shower and a long cry.
By Ellie DeLano - November 30, 2015