It Was Only A Bag Of Chips, But The Kindness Behind It Spoke Volumes 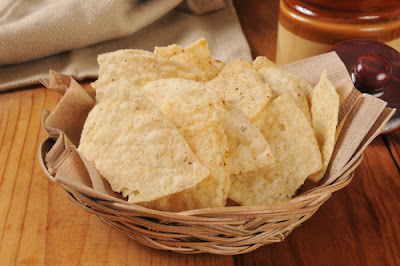 On Saturday, the kids and I were shopping in a town nearby, and we decided to round the trip out with lunch at Margarita's restaurant.

It was our first time to their chain, and we settled in with our food and our server was nice and it was all good.

Until my son started singing.

He does that, you know. He loves to sing, and most of the time, I don't discourage it too heavily. He's got a good voice and it makes him so damn happy and honestly, he's adorable when he's singing "Gaston" from "Beauty and the Beast."

But he was loud. And I kept shushing him, asking him to be quiet and respectful of the other diners - even went so far as to tell him we were taking our food to go if he didn't mind me. His sister wasn't aiding my efforts to calm him down - she's a teenage girl, and having your nearly twelve year-old brother singing Disney really loud with exaggerated hand gestures in a public place is seriously cringe-worthy. Autism is hard some days. Teenage girls interacting with autism make it harder.


So I was riding herd on him being loud and riding herd on her being annoyed at him and wishing I wasn't the one driving the car home because I really wanted a margarita after bouncing between the two of them. My son had stopped singing, but now he was repeating angry phrases over and over while tears tracked down his face, and my daughter was doing her best to slide under the table.

Finally, we were finished and my son asked if we could take the rest of the chips at our table to go. I asked the server for a container and she came back with a huge bag half-filled (and that was a lot of chips!) with fresh, warm chips right out of the fryer.

My son's face lit up as he thanked her, all thoughts of singing deprivation driven from his head as he stared at this huge serving of chips just for him. It was an instant mood-changer. He was chattering and excited and skipping all the way to the car.

I turned to the server as we were leaving so I could thank her again, and she gave me a warm smile and said, "No problem. I know someone a lot like him."

That's code, and we all use it. I can spot a kid with autism from a half-mile away, but I don't dare go up and talk to the parent about their autistic child because they might not yet be diagnosed, or they might be diagnosed but the parents hate you "labeling" their kid (I've had it happen), or they may have other issues that can present as autism when viewed in a casual context (like OCD or ADD). It's easier just to talk in generalities, and let them know you support them and their kid.

Which is what this server did with one bag of chips, one smile, and one phrase of solidarity.

And I want her to know that people like her make it a lot easier for him to be who he is and his sister to be the one who occasionally wishes he was concentrating on something else, and me to be the one who watches over, and sometimes needs a hand.