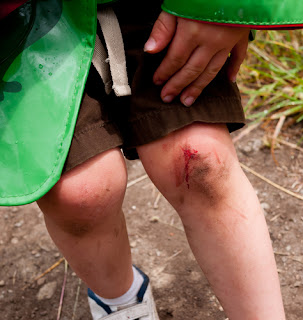 Last night was our local Halloween parade, and the kids and I grabbed their empty goody bags and a few folding chairs and began trudging from our parking spot a good mile away from the action. As we wound along the sidewalks, dodging people who were already set up and all the kids running by, David was keeping up a running diatribe.

He gets like this sometimes. You change the routine and it makes him crazy. We weren't able to park where we've parked the last two years and had to walk a little further than usual. David couldn't carry his chair that far (or so he told us over and over until I took it and carried it), and he didn't want to walk back that far (not much I could do about that) and he was hung up on it and repeating his objections over and over, until Anna was snapping at him and I was getting edgy riding herd between the two of them.


He was too intent on harping on us to properly dodge a toddler and he went down, slipping off the curb and landing on his hands and knees, scraping up one palm. There was a single drop of blood on his hand, he didn't even scrape his knee, but if I had recorded his reaction, you would have sworn he was attacked by a chainsaw or had a compound fracture of the femur and a decapitated hand.

David is almost twelve now, and he's big for his age. Obviously, he's going to draw stares for a reaction like that. He was shrieking uncontrollably, flailing his arms, tears pouring like waterfalls from his eyes, all while everyone on the crowded street gave us "that look."

Those of you with special needs kids know "that look." It's the one that says What a brat! or What is wrong with that kid? and you can practically hear their smug inner voice saying No kid of mine would ever behave like that....

But I don't say it. I don't ever say it because I'm too busy taking care of my kid.

Once I got him calmed down, we dabbed the tiny spot of blood off his hand, walked a little further, set up our chairs and settled in. I handed him my phone so he could play some games - a distraction technique that thankfully worked - and Anna was grumbling about his behavior, and I felt the tears prick at my eyes.

As always, the thoughts are there, eating away at me.

So I took a deep breath and told my inner self to shut the hell up because we just can't think about that right now, and the parade started, and David got lots of candy, and everything was okay again.

We watched the last float go by, picked up our chairs, slung the candy bags over our arms and started for the car, making slow progress through the enormous crowd. Every so often, one of David's schoolmates would see him and shout out his name - we're quite used to that. We jokingly compare him to Norm from "Cheers" because everyone knows David. Even during the parade, he had schoolmates who were on floats or walking alongside, and they'd make a point to come over and say hello or give him extra candy.

We had to stop for a moment at a bottlenecked area, and another school chum made a beeline to David's side, darting away from her parents, who followed.

"Hi David!" she said, giving him an impulsive hug.

The Mom's face lit up and she said, "This is David?" Then she turned to her husband. "Honey, this is David!"

Just then two more friends shouted out his name, and as we started walking again, I counted eight more. The Dad (who was behind us) jokingly said, "David, you should run for office."

And then it hit me:

He's going to be okay.

David, just from simply being the boundless, open, happy-go-lucky, incredibly accepting and friendly kid that he is has an entire network of friends and supporters - and they've all got his back in so many ways.

But he has others, many others, who will, always. They can't help it. He's easy to love.

He's going to be okay.