It Ain't Easy Being A Light Sleeper 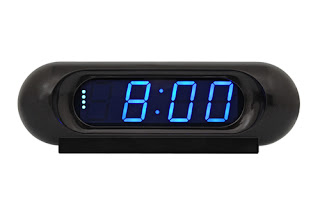 When my ex and I first began cohabitating, the clock radio alarm was on my side of the bed. He soon learned that this was folly. Every morning at 7am, the clock would make a distinctive "click" a split-second before the radio would engage, and in that fraction of a heartbeat, I not only rolled over, but I found the off button (rather than the snooze) and turned it right the hell off and went back to sleep.

We were in college at the time, and that meant he was late or slept right through some things (me, too) and he ended up moving the clock to his side of the bed. He learned quickly enough that I can vault myself out of a tangle of covers (or encroaching male) and slap the snot out of a clock between the click and the start of a song, return to my side and be fast asleep before he even registered that there had been an elbow in his throat.


It only got worse when I became a mother. Add in those Mommy hyper-spidey senses, and my sleep state superpowers became frightening. At first we had a baby monitor, but I could hear every snuffle, every sigh, every roll over in her sleep and I'd be out of the bed and running for the doorway to her room before I realized that she hadn't woken up, merely adjusted or shifted in her sleep. Then I'd feel like a horse's ass tiptoe-ing backwards out of there because - of course - she's a light sleeper like me.

A cat jumping off the back of the couch downstairs will have me up and halfway down the stairwell before I realize what I've heard. The branch of a tree brushing the side of the house would make me sit straight up in bed, shaking his shoulder to say "What was that?"

Not that it did me much good. A cannon fired straight at his face wouldn't wake him once he was asleep.

(Okay, that was a stupid way to put that - a cannon fired in anyone's face would ensure that they slept a good, long while without waking, wouldn't it? Not that I'm suggesting that the ex deserved a cannon to the face. Heavens, no.)

Now that I'm a single woman, and all alone in this house every other weekend, every creaky floorboard, every stray cat howling outside somewhere, every car going by four streets away, hell, everytime the icemaker fills up in the fridge downstairs in the kitchen, I am jolted instantly awake. If it's before 5am, I stay awake, too. It's maddening.

I've tried sleep aids, but they all make me so groggy, I don't recover my faculties until mid-afternoon the following day. Not helpful.

Do any of you share my dilemma? Please tell me I'm not the only one bursting with adrenalin at all the wrong hours.