To My Ex Husband, Who Marries This Weekend 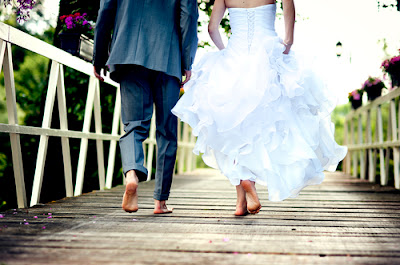 I promised myself I wasn't going to dwell on this, and I'm happy to say that I truly haven't. You've been moved on five years now (even though the divorce was only granted three months ago). To be fair. you moved on two years before you moved out, and now you're marrying the lucky (?) girl.

But this isn't going to be a blog post where I snark on any of that.

Because the truth is...I want this to work for you. And her. I really and truly, honestly do. Nothing could benefit our children more than stability, and having two stable, loving homes is almost as great as having one would have been.

And there is no denying that she is far more of what you always wanted in a woman in a lot of ways. I say that without an ounce of rancor. She's your dream girl, truly. And I hope, for her sake and for yours, that the dream becomes a solid reality and you never forget just how lucky you are to have found the girl who finally, finally "fits."

Along with all that I want to say....and this is the hard part...this is where I confess the one thing that's hardest for me to confess.

I still love you.


Despite our ups and downs, despite how far down those downs went, despite it all...I still love you.

The love I have is a wistful thing. Out of the "Could have been" stage for years now and into a more realistic "We had some laughs and some good years" sort of thing. I love you for being the guy who helped me get over the terrible guy before you, even though you hurt me more deeply than he ever did. I love you for the way you used to stroke my hair when we were lying together in bed. It used to make me feel cherished, even though in reality I probably never was, much. You and I got together very young and I learned so much with you. So much.

Most of all, I love you for giving me our children - the two greatest gifts of my life - and despite all the good and bad and worse, I would never, ever erase a moment of it because it would mean erasing them. They're part you and they're part me and they're entirely wonderful.

And now, they've got two families supporting them, two shelters from the storm, And with the addition of a new stepmother, two more eyes and ears to watch, to listen, to guide. Regardless of any old issues, that's a good thing to have.

My friends talk of karma and cackle loudly when they mention you. And just recently, I can say a lot of that held true. Things are finally coming around for me - but not because of karma. It's because I worked for it. I realized I could sit and wallow in the love I used to have and beat my breast and scream about karma while I remind myself of all the ways I felt you wronged me. Or I could tilt my chin up, wish you well, and keep on walking.

Some days, it's been easier than others. Today, it's easier because of practice. Today, it comes from the heart, and I mean it: I wish you well.

I wish you well, and I wish it with love.