So What's In Watkins Glen? And Why Is It Haunting Me? 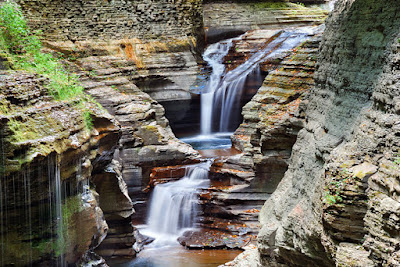 Sunday morning, I awoke from a dream, which is actually pretty usual for me. I do my deepest sleeping in the hours just before I wake, and sometimes, I remember what I dreamed about.

I was answering the door, and there stood a guy from my long-ago past. He was one of the two guys in my history that I consider to be "the one that got away." Or, more accurately, "the one I stupidly pushed away."

I remember spluttering and bringing up the fact that he was happily - I mean really happily - married (and he is). He reiterated by assuring me that he wasn't looking for that kind of relationship. He just missed being my friend because he and I had always been such good friends before we stupidly crossed that boundary and ended up drifting apart afterwards.

I balked again, because I knew his wife would not be as on board with this as he was, even though he was right - we were great friends once - and his wife (who, in the dream was a girl I went to high school with and she's never met this guy) was suddenly there, with their three teenage daughters (I have no idea where they came from) and she was pregnant with baby number four. She told me to go ahead and let him in, but she didn't seem thrilled with the idea.

I closed the door in their faces, and I could hear them both yelling at me:

And then I woke up.

First of all, I am not pining for this guy. I haven't thought of him in ages. And he's got a fine life and a great family and has never, I mean not ever expressed an interest in rekindling a damn thing. I think we've commented to each other on Facebook once or twice across a half dozen years. So it's not about him.

Second, I haven't spoken to the girl from my high school since high school, so it's not about her, either.

And third....I have never been to Watkin's Glen. Nor has anyone told me that they have. I don't think I know anybody who lives near there - at least not anyone who comes to mind. I have no conscious memory of even having heard of it. I Googled it this morning out of curiosity and found a gorgeous state park in Western NY that is nowhere near me, so I am honestly a little freaked out.

What is in Watkin's Glen? And why does it want me there? And why did it send an old friend and a girl from High School that I barely knew to lure me? And why is she knocked up at this age?

I tried a banana split flavored Twinkie that night for the first time. I had no idea it had hallucinogenic properties.

Now I want to go to Watkin's Glen. I'm getting a real "Eternal Sunshine of the Spotless Mind" vibe, here. Except instead of a voice whispering "Meet me in Montauk," I'm being pointed to Watkin's Glen and I am compelled to go.

Please tell me that none of you are being compelled there as well, so I can rule out "Space alien contacting me to save the human race."

Maybe it was a message. Maybe it was just a funky Twinkie. Either way, I think I have to find out. More on this as it develops. In the meantime....

Have you ever had a freaky dream that you were just sure carried a message? Tell me about it!
By Ellie DeLano - August 04, 2015