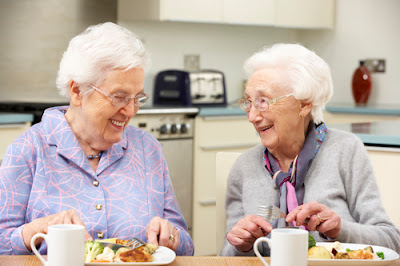 A friend and I got into a conversation the other day about prejudice and bigotry and all the prejudiced and bigoted people we'd known in our lifetimes.

And of course, we didn't talk about any of our own private prejudices. Because we aren't like that. We're good people.

We are, you know. But it's the truth that even good people have their prejudices. You're looking at a photo of mine, above. The one group of people I'm honestly not entirely comfortable to be around.

Look at those cute old ladies! How can I say that? And I love The Golden Girls!

First of all, you need to know that I didn't grow up around my grandparents. We were a military family and we moved a lot. I saw them every few years for a week at the most, so they were benevolent strangers, but strangers all the same.

Then I spent eight years working a retail job in a shopping mall when I got out of college, and unfortunately, elderly people were hands-down my least favorite group of people to wait on. They took a lot longer, they dithered over everything, they were always trying to get me to give them senior discounts (I worked in a jewelry store, not a diner) and for every ten that monopolized half an hour or more of my time, maybe one bought something, no matter how hard I cow-towed and smiled and ooohed and aaahed over their choices.

Of course, they weren't all like that. Sometimes, I'd wait on one with a quick wit and a sparkle in their eye and a great story to tell, but they seemed to be the exceptions to me, at least back then.

I've had to actively work against that inherent prejudice over the years, and I've been so glad that I have on so many occasions. I've met and talked to many interesting older people and learned so very much from so many years of experience. It's easier now, but I still have to make myself do it.

And my friend who has no prejudice? She went on to tell me that she was glad they're allowing gay marriage, but do gay people have to be so...gay about it? It's okay for them to marry, she told me, but they're all so damn flamboyant. Don't ya think?

No, I don't. But then again - I'm a theatre person. Flamboyant is wonderful to me. That prejudice isn't mine to bear.

Maybe she grew up with a grandmother at her side, and can't imagine feeling uncomfortable with wrinkles and gray hair.

And maybe neither of us should be so damn smug about being such good people, and work to be better people.