Fireflies And Faith - Fifteen Years Of Living With A Miracle 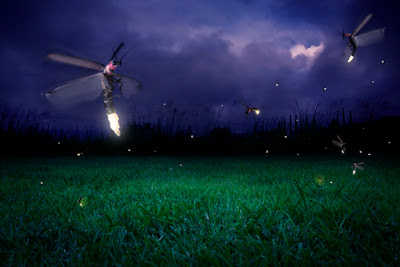 Some of you may remember that my children - like all kids - are miracles. But mine are a little more so than average. They were the culmination after five long years of an infertility battle and the product of science and technology, perfectly incubated for the first 72 hours of their existence in petrie dishes before being carefully transferred - along with their sibling embryos who didn't stick around - into my womb to await a final outcome.

Fifteen years ago this July 4th, my hormone levels determined that it was time to transfer some embryos, and when that time comes, it doesn't matter if it's a holiday or not. The doctor who was on call met me at the clinic, and the procedure was done in under twenty minutes, start to finish.

We happened to be camping nearby at the time, and returned to our tent so that I could lay flat for a few hours. It was raining, anyway, and I remember us bemoaning the fact that we were rained into our tent and couldn't even have some married people fun time. So we read books side-by-side, laying on the sleeping bags, not even discussing what might be going on inside  me because we'd been disappointed so many times before and just couldn't let ourselves hope, really.

Then the rain cleared and while he grilled up some dinner, I sat by the fire in the twilight and watched as the fireflies started coming out. There were thousands of them everywhere - we were camped very close to a large, open area and you could see and endless sea of them.

Suddenly, to my surprise, they started landing on me - and only on my tummy. Firefly after firefly, dozens and dozens of them. I called him over to look and even he agreed it was freaky.

"Maybe it's a sign," I said hopefully.
He shook his head."Don't get yourself worked up," he said. "Don't set yourself up like that."

But I did anyway. I allowed myself, in just that moment, to have a little faith. I let it seep in and root into my heart and I kept that spark there, nurturing it with the memory of a sea of light glowing in the darkness, shining just for me.

A few weeks after that, I was at my second weekly ultrasound and the first one my husband came along to. He was watching from behind the monitor as the technician passed the wand over me.

The previous ultrasound - my first - was disappointing. That small blip could have been anything. I could barely see it and I certainly couldn't distinguish it from anything else. Were they sure it was a baby?

"Can you see anything?" I asked.
He sat there in silence, staring. Finally, the technician turned the monitor.
"Why don't you take a look?" she said.
I lifted my head, and there she was. Or should I say, there it was, because I was still seeing an indistinguishable blob, but this time - oh, this time - it had a beating heart. I could see it. I could count it.

I reached out with shaking fingers and touched that monitor, and I remember saying,

She came squalling into the world the next April, and two months later, on the first warm summer evening, I laid her down on a blanket in the grass in the back yard, and I tickled her little toes and felt the breeze on my skin, and watched the fireflies as they winked in the wonder all around us.

And wouldn't you know it - they landed on her. Dozens of them.

A lesson in faith, and in miracles. And I'll never be able to look at a firefly and not feel every ounce of that, for always.