Excuse Me As I Use These Scissors On My Yak 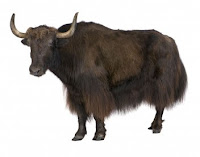 Yesterday, I was very busy at my company's annual summer picnic, and as part of the picnic committee, I had to help out with the decorating.

While hanging decorative paper lanterns, one of my coworkers turned to me and asked, "Do you have a scissor?"

This isn't the first time I've heard this (though I've only heard one other person say it that way), referring to scissors in the singular like that. It's a local sort of thing and it still rubs me wrong when I hear it. Scissor is a verb, not a noun. You can scissor your legs while you're swimming or something, but if you're referring to cutting implements, they are scissors.

Asking me if I "have a scissor" is like telling me you like my pant. It's jarring.

And while I'm expounding upon the vagaries of language...I heard an elderly women refer to a couch as a "davenport" the other day. When was the last time you heard that one?

That actually has some historical reference, as there was a famous sofa maker by that name (no longer in business) and I guess its a word that got genericized, like Kleenex or Band-Aids. Now it's a fossil of a word, used by grandparents and great-grandparents. I rather like it. I say we bring it back.

Today I heard a contractor use the term "Yak Shaving" to describe the work of another contractor. I had to look that one up, because it was new to me, and I was sure that I'd find nothing. I mean, come on....yak shaving? He had to have made that up.

So, if you'll excuse me, I'll just be shaving my yak with a scissor over here on this davenport.

What sort of weird language/colloquialism things have you heard that make you scratch your head or cringe?
By Ellie DeLano - July 23, 2015

Email ThisBlogThis!Share to TwitterShare to FacebookShare to Pinterest
Labels: Interesting