BIC Wants To Save Handwriting - Is It Worth It? 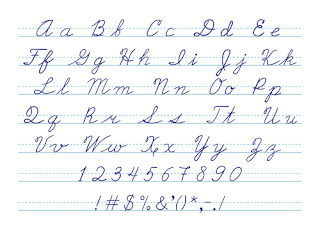 Look, I know you mean well. You're trying to save a dying art - the art of handwriting.

In this age of technology, cursive is falling by the wayside. Curlicues and looping letters are giving way to keyboarding and screen taps. I've heard your sentiment echoed from many of the "older set" (and by that, I mean those of us over thirty), but the attitudes among the interns coming in at the day job and the kids that go to school with my daughter are drastically different.

They just don't see the necessity.

All their school papers are typed on a computer now. Most of them aren't even printed on paper, but saved on a flash drive or emailed directly to the instructor.

The days of red pens correcting lines of language on a crisp sheet of paper are fading into memory, and my daughter and those like her aren't mourning it a bit.


I know you are, BIC. After all, that ink is your lifeblood. And to be fair, we will always need the written word in some form or another. Quick notes to family or colleagues, elementary school kids learning the basics, hand lettered posters in hallways and on hometown parade floats - they'll all still be around.

But there's no denying that your market is shrinking. And cursive handwriting is no longer being taught in some school districts.

As the mother of a child with autism, a child who struggles with his fine motor skills daily and could really use as much fine-motor skill practice as he can get, I want to say this about cursive:

My son, who has a very hard time understanding that a word can mean two different things, that a figure of speech is not to be taken literally, that twelve times twelve isn't the same as twelve plus twelve, that struggled to painstakingly learn to form each and every upper and lower-case letter, taking five times as long as his peers to complete the same sentence....

That boy had to learn that all those letters he mastered have to be written a different way. Just because.

"But he should learn to make his signature!" you cry.

Contracts can be signed with an "X" if necessary. And after seeing some people's signatures, you have to wonder if anyone cares much what a signature looks like anymore. I seriously doubt anyone will throw out a contract simply because his letters aren't strung together. That's if he even signs a paper contract at all.

I work for a Fortune 500 company. We e-sign almost everything now, and so do many of our vendors - more and more every day, in fact.

And tell me about the last time you received a handwritten note in a birthday card or an actual letter in the mail - would it be any less heartfelt simply because the letters aren't joined together? Would it mean less to you?

As for that motor skills practice: sorting beads, stringing cards and building with Legos accomplishes the same thing for a child like my son, and without the frustration and questioning of why we make letters two different ways for no real and valid reason.

I get what you're trying to do, BIC. There's a beauty and fluidity to handwriting. As a teenage girl, I perfected my scrawl to a puffy, loopy, feminine work of art, complete with stars or flowers or circles over the "i's" and I wrote and wrote for hours. I still write longhand sometimes.

But for me, writing is a joy. And that cursive is my brush, letting me paint my thoughts to paper faster and more smoothly. For kids like my son, cursive is an ancient albatross around his neck, pecking at him constantly and reminding him that he's not keeping up, not good enough, not doing it right or pretty or smoothly, even after years of practice.

And for kids like my daughter, who is soon to begin her freshman year, cursive is merely a relic that she finds no use for, when her fingers can fly over a keypad five times as fast as it would take her to dig out and grip a pen.

So BIC, we're going to have to agree to disagree. Nice website, though. Really.
And...just how did you make that, exactly?