The Problem With Autism (Sometimes) Is Calling Everything A Problem 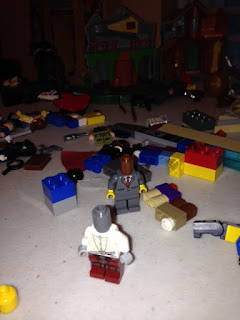 Please take this survey! The post begged. They were researchers looking for information from parents of children on the autism spectrum.
Specifically, they wanted to know about the way we handled certain aspects of behavior that were common to children on the spectrum: decreased eye contact, fixation, perceived lack of interaction.
Notice I use the word "perceived," I wish they had.
See, my problem with the survey was that certain words were being used over and over. One of those words was lack.
Does your child lack coping skills? Does your child show a lack of interaction?
Pre-autism me would have answered those questions with a definite yes. But you see, I've since learned to speak autism. To hear it, even when it can't find the right words, or say them in the right way, with the right facial expression. Even when the words won't come at all.
And I've learned, oh, how I've learned, that my child doesn't lack. He has coping skills. They're just not always strategies you and I would choose. It makes him feel better to repeat his question a dozen times if he has some anxiety about the answer. It comforts him to have a cold cloth on his eyes when he's angry. If he can't find a cold cloth, he presses his palms into them, hard.
Those things aren't always interpreted or received well by others, so I work on gradually finding a middle ground. He's slowly - painstakingly - learning that people get annoyed when you repeat. So he counts on his fingers when he asks. Someday, he may not need to count at all. Or ask more than once. We'll see.
Another word I kept seeing over and over in this survey was the word problem.
Does your child make eye contact when speaking to you? (Answers: Not a problem, Still a problem, Severe problem, was a problem but not anymore).
Do you have a problem getting your child to play with his toys in an age appropriate way? Does he have a problem playing with his toys in their intended manner?
And this is where I started to get....well, hell. I got mad.
Problem? Is it really a problem that he takes the heads off all his action figures and Lego figures? Sometimes he replaces them with blank pieces, and sometimes he just leaves them headless. Yeah, it's odd for us, but not for him. I asked him once why he did that, and he answered, "They don't need them." And for someone who doesn't really read facial expression first and foremost, that makes sense.
But is it a problem?
His peers have outgrown action figures and have firmly moved on to games and apps and social media. He enjoys the first two, but has no use for social media. I'm kind of glad for that.
Is that a problem?
The way my kid plays with his toys in the comfort and privacy of his home - or anywhere - is, for me, no big deal. Of all the things I have to worry about regarding my son and strategies to help him live a rich, full and rewarding life - how he plays with his toys is pretty damn low on the list. A complete non-issue.
And not a problem. Or a lack.
So with all due respect to the esteemed researchers who put that survey together, I have to ask...do you know people with autism? Interact with them? See them as individuals - individual who like what they like and have a perfect right to like it?
Have you met many autism parents? Not just the early-after-diagnosis, grasping-at-every-straw, overwhelmed and frantic parents, but the ones who've learned - a little or a lot - to speak autism. To breathe it and inhabit it and see it for all that it is.
And it isn't a problem.
A challenge, certainly. A trial sometimes, a frustration sometimes, a trickle of fear sometimes when you wonder how the future's going to shake out. But sometimes, it's a wonder. Sometimes, it hits you in the face and makes you re-examine the way you look at things and hear things and that's actually a good thing. Sometimes, it makes you laugh out loud because you forget how damn astute your kid really is behind all that noise.
The problem is people who say words like problem, and lack and say them again and again in association with kids like mine. The problem is people who say words like problem and lack right in front of kids like mine and think they don't hear you, and understand you, when they do.
Oh, they do.
And it seems to me, we have a lack of trained support staff who really know how to address and understand the very people they want to help. And that, my friends, is a problem.