My Son's Advice To All You Graduates: Grow Up To Be Yourself 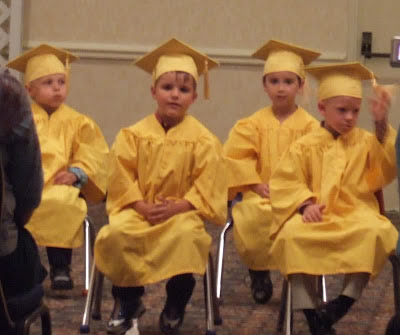 David and I attended a neighbor's graduation party yesterday, and as this was a kid who was barely a toddler when I first met her, it was both wonderful and bittersweet to realize she's a grown woman now, and heading off to college.

I wanted so badly to rattle off some sage advice, something that would hold her for all that comes ahead - but the truth is, it's her life now. Navigating her life from the seat of my own is not only arrogant, it's useless.

But I do have one piece of wisdom to share, and it comes from the mouth of my son, at age five.


Back in June of 2009, David was attending special ed classes at the county intermediate unit, and they had just made the decision that he was okay to mainstream into public school kindergarten, provided our district gave him support services. He was to be getting a speech therapist, an occupational therapist, a learning support teacher who would do pull-out sessions and an aide at his side for half the day. Even with all that in place, I was terrified. Public school can be a harsh place, especially if you're the kid who doesn't act "normal".
This particular day was graduation day for his preschool program, and I sat in the crowd, with a camera in my hand and a lump in my throat.
He marched down the aisle, in his bright gold gown, his hat perched jauntily on top of his head. "Hey, he's keeping the hat on!" I said to his father, and he echoed my surprise. For a moment, I thought he'd blow the whole ceremony because he saw me and immediately raced down the aisle into my arms screaming "Mommy!" I gave him a quick hug, and reminded him that he needed to keep walking till he got to the chairs. He said "Okay. I'm walking!" Then he jumped back into the procession, made it to his chair, and stayed in it in a very well-behaved manner, in fact, he was better behaved than most of the other kids. I sat there smiling, trying my hardest not to cry. I knew if he saw me, he'd leave his chair and come running to comfort me. David didn't yet understand tears of happiness. He still doesn't. Maybe he will, someday.Near the end of the ceremony, the teachers asked the children to stand one-by-one, and then they asked each in turn what they want to be when they grow up. They had practiced this with David, and we all agreed to try to teach him to say "Musician". David was a very musical child, with one heck of a singing voice, so we figured it was as close to what he'd like as we could get, since he couldn't really understand "growing up" and all that it entails at the time.David had a different plan for his future, it turns out."David," Called Miss Connie, gaily, "What do you want to be when you grow up?""David!!" He answered, without a pause and with great gusto. The audience laughed indulgently."Yes, your name is David." She tried to remind him of the subject at hand. "What does David want to be when he grows up?"He stared at her in bewilderment, then turned his eyes to the middle of the crowd, looking for me. I smiled and said "Go ahead, David. What do you want to be?"He thumped his chest proudly and said quite firmly: "David! I be David."


And that was that.
And as always, I have underestimated him. David will be exactly who he is, and nothing less. As he was meant to be. As he is destined to be. If only I could have one tenth of the gusto to live my life as he does, fearlessly, persistently, and with no apologies.Once, I never thought that day would come, or at least, not as soon as it did. But there it was, and there he was, graduating from pre-school, and on his way to Kindergarten where he would be David, and nothing less.He's in high school now, and still happily, fiercely David. He has friends and speaks in complete sentences and struggles with math but still holds his own in class. He's everything I want him to be and several things I never dreamed he could be. And all because he demanded that the world back off and let him just be.
So there's my favorite quote. And I'll take the liberty and paraphrase. "When I grow up, I'm going to be me."
Because that's who I should have always wanted to be in the first place.
By Ellie DeLano - June 08, 2015