My Kids Don't Look Alike...And I Think It's Been Good For Them 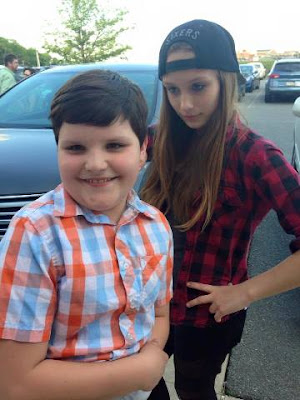 Last week, I came across a blog piece from Whitney Barthel about they way her children don't look much like each other, and how it inexplicably makes her sad for some reason.

Whitney talks about her own resemblance to her siblings and how that cemented the "we're all part of a family" feel for her growing up.

Oh, do I get that. I am the only girl in my family, but when I tell you that I look like my brothers, I am not exaggerating. We have a strangely strong resemblance to each other. In fact, when they walked me down the aisle at my wedding (my parents didn't come....that's a blog post for another day), all my in-laws thought we were triplets even though my eldest brother has seven years on me and the other one has four.

And when we visited either side of the family, we were all told how much we looked like either our mother or father, because we all clearly bear facial features and even certain mannerisms of both.

Both of my brothers have children that are clearly, clearly part of that family tree and clearly related to each other upon first sight.

Me? My daughter might sort of pass, being blonde and blue-eyed, but she has so many of her father's features. Her eye color is mine, but the shape of her eyes and nose are his. She's doesn't have my rounded forehead but his more sculpted plane. She does have my chin.

And my son? He looks like his Italian Daddy. He's dark haired with beautiful, unfathomably dark brown eyes. He also has my chin, and it's the only feature he shares with his sister. You'd have to look for it to realize it, though.

So when he began his school career, despite being the only two kids in the school with our last name, no one outside our neighborhood knew they were brother and sister. This has been alternately hilarious (my daughter still occasionally gets "Oh, you know David! Isn't he awesome?" or David gets an instant new male friend a grade or two above who just found out Anna is his sister) and it's been poignant - Anna has told me it sometimes helps to weed out the jerks. If they make fun of her brother or treat him badly, she wants nothing to do with them.

It's also helped them become two very distinct people, unfettered by the judgement of others for their association. More than anything, it's taught them that family goes deeper than skin tone or facial features or hair and eye color.

Do you look like your siblings? Do your kids look like each other? Does it matter to you either way?