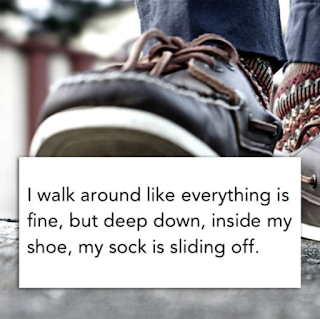 This week has been a never-ending list of annoying things. I have a good friend who refers to this phenomenon as "a confluence of irritants." I have a very long list, but two of them are relatively minor:

Those two things are annoying me to the point of madness. Seriously.

And then, in the middle of my confluence of irritants, I came across a thread on Reddit where they asked what minor irritation you would wish on your worst enemy.  Some of these answers had me cringing:

There are a lot more of these (here's the link if you want to experience the full cringefest) and they're pretty hilarious.

It reminds me of a conversation my brother and I got into once, about horribly funny ways to punish wrongdoers. I came up with sliding them down a razor blade into a pool of rubbing alcohol, but my brother (who, it should be remarked, is really, really a twisted puppy) came up with throwing them off the Empire State Building and having them catch their eyelid on a nail on the way down.

Okay, maybe we both ain't right.

So tell me, readers -  what minor irritants are bedeviling you today?