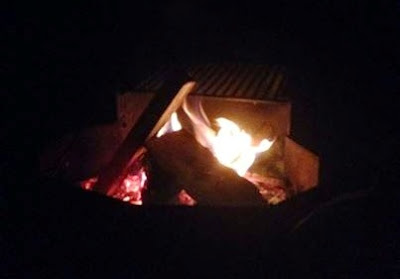 So I took the kids camping and we all had a good time but I set a table on fire.

Which isn't normal for me. Really.

We camp every year, and I've been camping all my life, so I've pretty much got it down to a science now. I can pack the car in under an hour, we can get camp set up (with two tents on the site) in the same time frame, and breakdown in a little over that.

And in between we frolic at the campground pool and ride bikes and play mini golf and eat ice cream from the campground store and make s'mores and whoa Nelly can I make a slammin' fire.

I think I might be able to survive a zombie apocalypse, I really do. I mean, if they have showers and flush toilets. Because I won't camp without them. Or an air mattress.

Come on, I'm not a teenager anymore. I gotta have something between me and the cold hard ground. And since Jason Momoa didn't come along for the ride (heh!), I had to settle for an air mattress.

Have you ever tried to haul your middle-aged carcass off a semi-deflated air mattress while simultaneously peeling an eleven year old with a death grip off your neck? And then fight your screaming bladder all the way to the bathhouse at five-thirty in the morning?

Those are survival skills, honey. And mine are fiercely honed.

Anyway, back to the table thing. Friday morning, we packed up camp and the kids went on to the pool while I finished up. It was muggy and humid and oppressive (because I was packing and loading and so enjoy dripping with sweat you know) and the bugs were out in force, so I lit our Citronella Bucket Candle on the picnic table and kept on packing.

Half an hour later, I turned to pack up the camp chairs and the entire end of the table was engulfed in flames. I shouted a few curse words that probably deeply offended the Mennonite family camping across from us, grabbed the dishpan I'd just packed, filled it with water and managed to put out the fire.

It turns out our Off Citronella Bucket had melted right through the container it was in, and set the plastic tablecloth on fire (I didn't even know you could do that). The table was covered in wax and slightly scorched in places, but otherwise none the worse for wear. The tablecloth was a total loss, but it was more than ten  years old - it had a good run.

Me? I lost a few years off my life but more than anything, I was grateful my kids weren't there because they would never have let me live that down. Remember the time Mom set the table on fire? Oh my GOD I thought we were gonna die!

Instead we can talk about the time my daughter tried to pet the kitty that wandered into our camp and Mom freaked out because it was a skunk. Or the time my son lost his tooth by sneezing it out of his mouth and into the bowl of pancake mix I had ready for breakfast.

Or the time we laid awake in the tent listening to a light rain hit the trees above us and marveling because almost none of it was falling on the tent. We opened the windows and smelled it though, along with the lingering smell of the extinguished campfire. And we were warm and snug in our sleeping bags, lulled by the night and the fresh air, and I fell asleep with both their hands in mine.

Those kind of memories stay with you always.

Plastic tablecloths, not so much.