So I Got Divorced Yesterday...And That Wasn't The Worst Of It 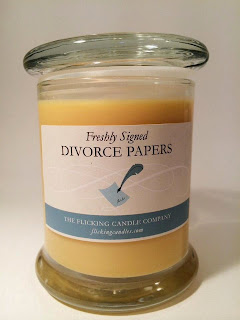 I came home from work yesterday, and just like I always do, I grabbed the mail. Inside the mailbox was a large envelope and it took me a minute to realize it was from the County Prothonotary's office.

Five years he's been gone, and it's finally official. Finally. And then I surprised myself, and in so doing I broke one of my absolute cardinal rules about getting a divorce: never make your kid your sounding board.

But it hit me with the force of a rock wall for a moment, and I started crying, leaning against the car, crying with relief, crying in catharsis, hell....just crying. I was going to pull myself together and then come in the house, but David opened the door, having heard the car.


He ran to me immediately - guess he missed the part where they say kids with autism have a problem with empathy. He saw my tears and he threw his arms around me and he asked me what was wrong and he told me he had me. He petted my hair, just like I do with him when he cries, and he told me it was all going to be okay.

Which only made me cry harder. Especially when I pulled back and saw so much of his father's face looking back at me. I got into the house and Anna ran up, worried over my inability to do much more than sob, with the paper clenched in my fist. She pulled it free and looked at it, and then she threw her arms around me and it was her turn to hold me.

And this time, I cried because I was sad. Not for me - but for her. For her and for David and for the way we let them down. And I told her that, over and over, hiccuping "I'm sorry" in between sobs as she held me tight.

Finally, the storm subsided and I pulled it all together and I made dinner and she showed me goofy stuff on Instagram and I showed her goofy stuff on Reddit and we watched House Hunters International and everything went back to normal.

And then it happened. Somewhere, on one of the many online forums I frequent, someone posted something in response to a blog post I put up, and basically said I was a boring read. It was petty, really - why say anything at all? Just don't read me for creep's sake. This is the stuff you deal with when you blog or write in any form - not everybody's going to get you or like you or want to say nice things about you and to you. I'm used to it.

But here's the best part of the whole night.

That damn remark bothered me a hundredfold more than that piece of paper I pulled out of the envelope earlier. It honestly bothered me more that some random internet stranger didn't want me than it did to know that a man I gave over two decades of my life and love to didn't want me.

That, my friends, is progress. Wonderful progress.

I'm not married anymore. And I'm a writer. I know I'm a writer because I've got critics. This is something entirely by me and for me and I own it and I live it and I breathe it.

And I am amazing. All by myself. Just me.