Once Upon A Time - Season 4, Episode 21 Recap: One Mother Of An Episode 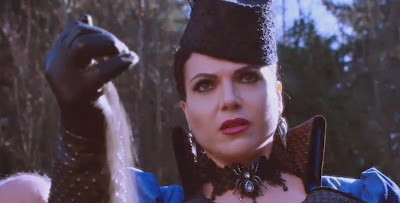 Tonight we get the twisted Once salute to that beloved holiday: Mother's Day. Only in the Enchanted Forest, motherhood is rarely celebrated with brunch at the Marriott.

We start with Regina - and I'm talking old school Regina, snarky, powerful and dressed to the nines, interrupting a wedding just to rip the groom's heart out because someone dared to irk her a bit, on this, the anniversary of her true love's death. She visits Daniel's grave and there, laying in wait, is Cora.

Oh, Cora, how I've missed you and that creepy, condescending smile.

Meanwhile, at a bar in New York, Robin and Regina are hashing out this horrible situation. Robin is understandably furious at being, y'know...raped by a maniac, but he wants Regina. He wants her and he's willing to work around the obstacle of a baby and a crazy faux ex. Regina is far less than enthusiastic at having a crazy babymamma in the picture for a lifetime, however.

While they're talking, Emma is at Neal's magical rent-free, tax-free, apartment with the perpetually paid utilities, explaining to Lily that Neal was a great guy but now he's a dead guy. Of course, Zelena has to stick her condescending nose into the conversation, and she claims to feel the baby kick after less than two months of pregnancy. Gee, Zelena. Crazy much?

Over in Storybrooke, Hook sits down at Granny's with Mr. Gold, unable to resist the urge to gloat that Emma didn't go dark after all. Once he swaggers off (and oh, Hook, how you can swagger), the author reminds Gold that this is really, really bad news. Emma's blood is apparently the ink - they need "dark savior blood" and they need it, stat! (What? You don't have elf tonic?)

Across town, a stilted reunion is taking place where Emma hugs the hell out of Hook and Henry but cold-shoulders Mom and Pop. Maleficent finally gets to meet Lily, and it's clear she's beyond happy about it, while Lily looks decidedly more ambivalent.

Regina, meanwhile, has put the anti-magic cuff on Zelena and locked her in the psych ward. Zelena tells her Robin isn't going to take too kindly to Regina killing the mother of his child, conveniently forgetting somehow that she killed Marian, the mother of Robin's child.

Over at Gold's shop, we watch as Gold yanks out his twisted black chunk of a heart just as Regina shows up to take the author from him. It turns out that Gold isn't dying dying (oh, why am I not surprised). It's just that the darkness will take over completely, and Gold warns that you really don't want that. He offers Regina the magic quill and asks for her help in getting the ink. She takes off with the author and leaves him, and he hits the floor. Oh no. he's fallen with a rotting heart and he can't get up.

Flashing back again to the Enchanted Forest, we learn that Cora came back from Wonderland because she wants nothing more than her daughter's happiness. She's somehow run into Tinkerbell, and gossipy ole Tink spilled the beans about Regina's failed attempt at finding true love with the man bearing the lion tattoo. She vows to help Regina find him.

Cue Cougar Cora, cruising the local tavern when the Sheriff of Nottingham oozes over to tap some of that AARP action. He lets her know that the man with the Lion tattoo is Robin Hood, but he's a married man and a real do-gooder. Cora smiles that evil smile and tells the very interested sheriff that she has a proposition for him.

Moving ahead to Storybrooke, the author explains that the energy of Emma's darkness has to "charge the ink" - whatever the crap that means. Furthermore, he's been dying to write some fanfic for Regina and really get into some AU stuff. "You've always been a favorite of mine," he tells her, before they both deliver tonight's winning lines:

"Of all the characters I've written for, you really do get screwed over the most," he says.
"I'm well aware," Regina responds sardonically.

The author cops to writing the story of her should-have-been-happy ending from an experimental book he wrote. He has no idea how Robin got the page, but he'd be happy to write Regina's happy ending now. He also throws in..."Someone must be looking out for you," which stokes the fires of a theory I've had for awhile now. I think the sorcerer either is - or is commanded by - Henry, from the future somehow. Who else would be looking our for Regina?

Over at Granny's, Mal is trying to bond with Lily over breakfast, and Lily is only focused on revenge. Mal tells her to look forward and be happy but Lily can't let it go. She says some really rotten stuff and needs to learn not to speak that way to her mother before telling her she's blowing this taco stand. Mal begs her not to leave, but Lily's done and off she goes.

Mal stops by the apartment, truly desperate, begging Snow and David to help her find a way to win Lily over. The Charmings, equally desperate and longing for redemption, agree to do what they can.

Regina cozies up to Lily, who's still bitching about Snow and Charming. She even references biblical stories - way to cover the bases, writers. Regina just keeps pissing her off until she can stab her in the finger and take her blood - which is full of "riled-up savior darkness." Yes, that was the actual line.

Back in the Enchanted Forest, Cora tells Regina she's found the mysterious man with the Lion tattoo and he's on his way. She whips up a new sparkly pastel gown and introduces her to...Nottingham? He's got the tattoo, and he and Regina share an evening, but Regina's too smart for them. She picks out the fake tattoo right away, turning it into an actual miniature lion that threatens to rip his throat out. Nottingham confesses that Cora put him up to the masquerade - because she wants him to knock her daughter up.

Yeesh! Can we get any more rapey, here? I mean....really? I'm used to this show pissing me off on a regular basis, or freaking me out, but lately? It's been turning my stomach.

So Regina is understandably miserable over her Mom setting her up to be raped and forced into motherhood, She realizes -again - that Mom never had her best interests at heart. Cora reminds Regina that she needs to build a dynasty (most likely because she's hoping to someday act as regent for Regina's baby). Regina thwarts her the only way she can: she drinks a potion that will end any chance of her ever being able to have a baby. She sends Cora back to Wonderland, and Cora goes, telling Regina, once again, that she was only trying to help.

Forward to Storybrooke, and Regina pays her scheming sis a visit with the author in tow. She puts on an evil-ish grin and tells the green nightmare that the author is writing a whole new story that will have the "perfect ending" for Zelena.

And I do mean moment. It seems like we get 60 - 90 seconds of fluff an episode, here. Killian tells Emma it's his job to protect her heart (awwww), and he'd be remiss if he didn't remind her that she loves her parents and they love her. It's time for forgiveness. And rum, apparently.

Across town, Lily's turned into a dragon, and Mal's worried that Lily might get hurt because she hasn't been taught to fly. They find her laying on the ground and as Mal tries to help her, Snow runs right at Dragon Lily. David (who is screaming "Mary Margaret" for some bizarre reason) runs after her but it's too late. Her stunt person has been thrown against a rock and Snow receives the trademark blood smear across the forehead with no swelling or visible wound.

Good thing Emma shows up with her magic to heal her. Emma takes Killian's words to heart and makes up with the parentals, and it's awww time all around as Killian looks on approvingly.

Meanwhile, Mal goes searching for Lily, who is writhing in a bad CGI fog before turning human again.. Mal gives her the baby rattle, and Lily realizes she's got a Mom who cares. For the first time in her life, someone truly wants a relationship with her. Mal reassures her that she doesn't mind the darkness thing, and convinces Lily to stay around for a week.

Across town in the psych ward, Regina tells Zelena that the author is going to write the crazy green bitch out of the story forever. Like she never existed at all. Zelena sneers out a nasty retort, comparing Regina to Cora, and Regina has a change of heart. She tells Zelena she's not going to do it after all. She's going to stick this out and make it work with Robin.

The writer is more than a little peeved when Regina instructs him not to write a thing, so he goes ahead and does it anyway, using the power of the words to poof himself to Gold's side.

Gold - who looks to be near death - tells him to write, and he doesn't care much what he writes.Then he magicks up a new and fresh book titled "Heroes and Villains," and the author puts the quill to the paper, beginning with "Once Upon A Time..."

Well, then. Lots going on in this episode, and it's clear they're setting up a game-changing finale. Will we go into some kind of bizarro universe where heroes are villains and villains are heroes? Will there be alternate timelines, a la LOST? Will Mal and Lilly become the new Snow and Emma, while Regina and Robin settle into domesticity in a tent in the woods? The mind boggles! 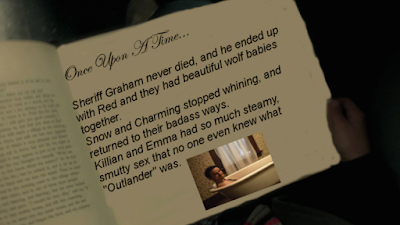 I'm going to give this one three storybooks out of five.

I realize this episode was mostly exposition, end-tying and set-up for next week, but some of the lines fell flat, the CGI was sad, the pacing was kind of slow and I still don't really care if the Charmings ever redeem themselves. The one bright and shining moment was Regina, taking her destiny in her own damn hands. Rock on, Regina. Rock on.