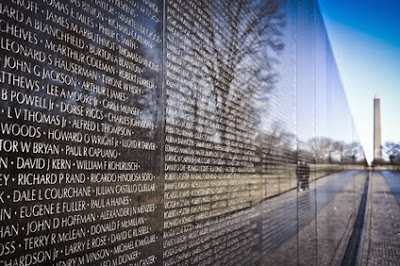 My father is a Viet Nam vet, but unless you were part of our family, you may not know that. He doesn't talk about it much. If you bring it up, he'll acknowledge it and he is proud to have served his country, but he's never in all my living memory talked about it openly and without invitation.

He was wounded there, and for his wounds he received the Purple Heart, which he keeps in a dusty box on the back of his dresser. I saw it once, when I was young and snooping around as kids do. My Mom yelled at me to leave it alone as it was Daddy's medal and very important. I remember asking my Dad what was so important about it, and he wouldn't answer me.


In 1995, my parents came to Pennsylvania to visit me here for the first time. As part of their visit, we spent a day down in Washington D.C., where Dad was wowed by the Air and Space Museum, and Mom got the thrill of her life going up inside the Washington Monument. We made our way down the mall to the Vietnam Memorial, where my father stood silent and staring at the wall. I asked him if he wanted to take pictures, since he'd been videotaping and snapping away all day. He simply said "no". I didn't push it from there. Finally, I got up the nerve to ask him if he had any friends on the wall. He replied that no, he was pretty lucky. Almost all his unit made it back alive.

I got Jim's last name, then I went to the guidebook to look up the reference, and found the panel Jim's name was inscribed on. As I pointed it out, I saw Dad's eyes move over the name, and I waited - for the tears, for the story, for whatever he wanted to share.

What I got was anger. A muscle in his jaw started ticking and his lips thinned to nonexistent lines as he went stone silent.

"C'mon," he finally bit out. "Let's go." He turned on his heel and walked brusquely away. I followed him, shooting quizzical glances at my Mother, who was wisely staying silent as we all walked toward the Lincoln Memorial. Dad didn't speak again for over an hour, and that jaw didn't stop flexing. We finally sat down for lunch somewhere, and while Dad was up getting our food with my husband, Mom leaned across the table.

"Jim was Daddy's sergeant," she said in a hushed tone.
"I know. I guess it's kind of painful for him to remember."
"It's not just that, honey. Jim was killed in the same attack that got your Daddy wounded. He was due to go home a few weeks after that."
"How awful!"
“He was in the hospital next to your Daddy for awhile. When he finally died, his seat on the plane was given to your Daddy, who was next in line to rotate out. So you see? Daddy got to go home because he got Jim's seat."
She slid back into her seat as Dad and my husband returned. I saw my Father's jaw had stopped ticking, and he was actually joking around again, which was a good sign, I suppose.

But I also saw something in my father I never thought to look for before. He wasn't just Dad anymore. He was an angry, wounded man who carried with him for over 30 years the guilt of taking a dead man's seat on the plane.

My father is only one of many who, on this day, are remembering those that didn't make it home. Or those that did make it home, leaving a large piece of themselves (literally or figuratively) behind somewhere.

For him, and for all those who fight still today, I remember. And I'll always remember how my father looked, staring up at that name etched into the marble. One name of so many names, but not just a name to him.
By Ellie DeLano - May 25, 2015