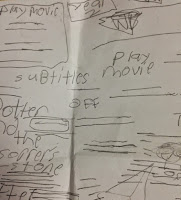 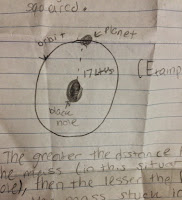 This is a tale of two papers, pulled from two different pockets, right before throwing laundry into the machine.

On the left, we see a paper from David's pocket - obviously his form of doodling. He's essentially copied the menu options from several of his favorite Harry Potter DVD's, detailing out the Warner Brother's logo, the titles, etc.

The whole page was covered in this. Front and back. Only instead of "Harry Potter," all the titles had "David Potter" in them instead. Because that's his biggest dream - to live in the movies he so loves to watch.

On the right is the paper from Anna's pocket - and looking at it (also detailed front and back), I assumed it was homework. It's not, or so she informs me. Just stuff about string theory and astrophysics that she found really interesting after doing some research on the internet. At home, in her free time.

And it reminded me of something I seem to forget too much. I have two "special education" students in my house. Because in my state, at least, a student who is tested and subsequently categorized as "gifted" is entitled to their own special education plan, one that meets their needs and challenges them appropriately.

I'm not telling you all this to crow about how smart my kid is.

Okay, maybe I am, a little. But there's a bigger and more important lesson here. Pulling those papers out yesterday just illustrated to me so perfectly these two minds, and how differently they work. And they're both attached to kids who have incredible potential, vivid imagination, and intrinsic, unquestionable value.

Most of all, they belong to two kids who are kind, and compassionate, and decent human beings. That much they share and there is no difference between them in how they share it.

They look at the world in two different ways.

And I look at them and see the same thing: endless possibilities.