This Is The Story Of A Friend....And A Dryer 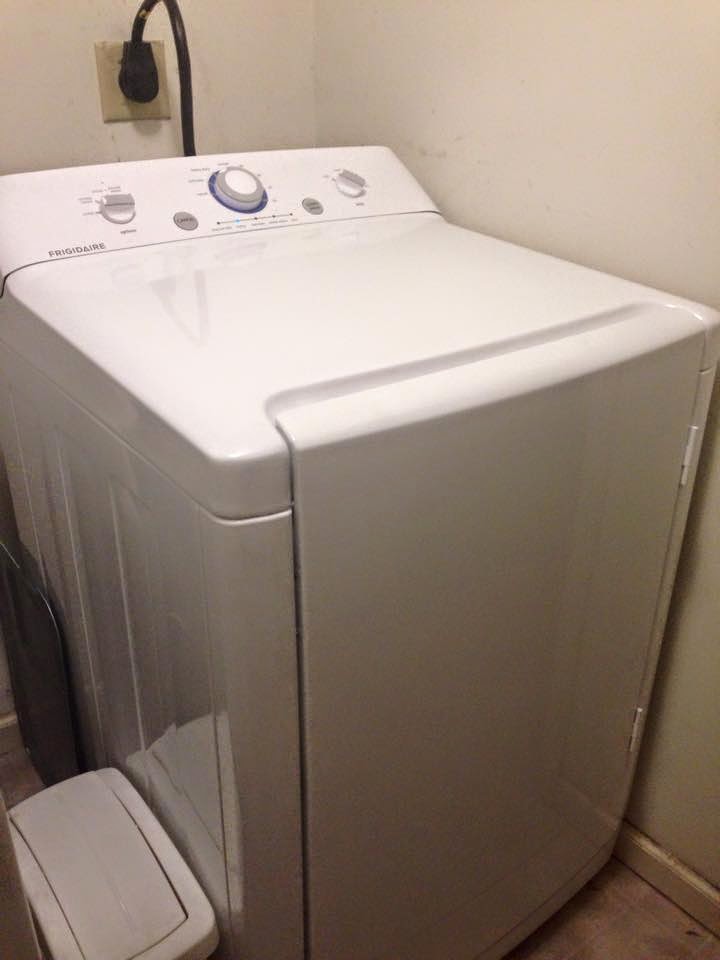 Do you see this? It's a dryer.

As I mentioned before, my dryer died. It happened about a month ago, and it's been really, really annoying and tough to work around, too. I don't live in a metro area, or a college town, and laundromats are not an easy thing to find. They're also really, really expensive.

This is all compounded by the fact that I have primary custody of my kids, I work full time (and write freelance on top of that) and my washer stops dead in the middle of spin cycle, leaving everything sopping wet and requiring twice as much drying.

My neighborhood actually has an "association" rule forbidding visible clotheslines that I would gladly flaunt, but it's still been mostly winter up here in PA, so it was a moot point anyway.

It wasn't the end of the world, but it sure was a perfect storm of suck. Like I didn't have enough to deal with - this was just one more frustration heaped on the pile. And of course, I can't afford a new dryer (and the drum was cracked - it was beyond repair), nor do I have the available credit to charge one.

But somewhere in the middle of that misery, God decided to throw me some rope from a direction I could have never anticipated: an old high school friend.

R was that friend. I could tell you we were besties, that we grew up together, that we hung out all the time.

That wouldn't be true.

She was a sweet, if shy girl. Like me, she wasn't one of the popular crowd - not by a longshot. We shared a lunch table of misfits and she and I partnered to dissect a frog once in Biology. We didn't hang outside of school, other than seeing each other at chorus concerts. And once high school was done, we lost touch.

God Bless Facebook. And God bless R. When I first found Facebook, R was one of the first people to befriend me. It turns out she knows everyone from my hometown and anyone who ever went to school with us. And as soon as an alumni shows up on Facebook, she sending us all recommendations to hook up with them and welcome them. And we do. She's put me in touch with people I haven't heard from in years.

It was because of R that we had record attendance for our last reunion - a reunion she worked tirelessly to help get the word out for - even though she couldn't attend herself. And on the night of our big event, someone brought a tablet and Skyped her in. We passed her around from table to table, we danced her around the dance floor, and we all made sure to post all the pictures we could and tag her in them, because she was there with us, as far as we were concerned.

And two weeks ago, out of nowhere, with nothing other than Facebook contact between us for a few years - hell, we don't even exchange Christmas cards - she sent me a private message to tell me that she and her husband had made a decision: they wanted to buy me a dryer.

I balked at first, of course. A dryer! Oh my God! That's a LOT of money. I mean, seriously! A lot of money. And I knew from her posts that she and her family weren't rolling in dough. But it turns out they'd recently gotten on top of a mound of debt and they were in a good place financially (though still not rolling in dough) and they wanted to do something for someone who really needed it.

And I really needed it. So I swallowed my pride and we talked about it and I demanded the cheapest possible dryer they could find me - even suggesting Craigslist or something - but she wouldn't hear of it. They went to Lowe's and they ordered me a solid, well-rated model that was more expensive than the bottom line but not ridiculously so, and even added a three-year warranty on top of it.

On Friday night, it was delivered. And I spent all weekend washing a mountain of laundry and drying it. I never thought I'd be so excited to do laundry again! Oh my God, it as wonderful. And I had to thank R, of course.

So I got on Facebook, and I wrote a big post, visible to all the multitudes of classmates and townspeople that she's put together across these last years. and I told them what she'd done. What a wonderful and kind and selfless and caring person she was to do this. I told them how much of a burden she lifted off my already weighed-down shoulders and I told them (and her) that the world was a better place because R was in it.

And one by one, many of them jumped on that thread to agree with me, to let her know how terrific a person she is, how they've always known what a kindhearted and amazing human being she is. The girl has a heart as big as the great outdoors, and we all agreed on that.

Now pay attention, because this is the important part: she had no idea we all felt that way.

She had no idea of her own worth. She was so touched, and she even mentioned that another classmate's father was an angel to her and her mother at one time. That classmate had no idea her father had been that important to R, and she was equally touched to hear it.

It just goes to show you - you never know where your kindness is going to fall. R and I were friends when it probably wasn't cool to be seen with each other. She was too shy, I was one of those weird drama girls. But we sat there at lunch every day with the other kids who weren't anybody important, and now here I am writing about R, because she's unaware of how important she is to all of us.

And I'm not just saying that because she bought me a dryer.

So this is for you, R. You have value beyond your comprehension. You were the glue that brought a lot of us together. Your unfailing optimism and steadfast support has shored up more weary shoulders than we can ever count.

You are a wonderful, incredible soul, and you are treasured.