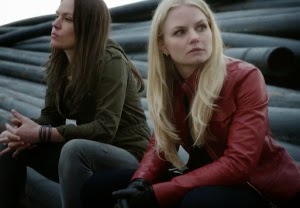 Tonight, kids, we're going to learn all about relationships. The ups, the downs, the good, the evil, the twisted, the gin-soaked, and the things that mold and shape us. And oh yeah, the writers are going to be gleefully cackling in the background the whole time.

Sheesh. Where do I begin? I guess we start where they do, with the apprentice, talking to the sorcerer's spectre (who sounds familiar but hell if I can place that actor's voice). We learn that Emma and Lily's fate has always been entwined and will continue to be so.

This becomes evident as Mal the Magnificent (and sadly missing the last few episodes) strolls into Granny's and asks Emma to right her parent's wrong and help her find her daughter - the mysterious Lily. Of course, Emma is gobsmacked and runs straight to the library, where she happens to find the one microfiche with Lily's birth record on it, because there could be only one Lily in the state of Minnesota.

And how the hell did Emma end up in Minnesota at some point? I mean, if she ran away there, wouldn't they just return her to Maine, where she's registered in the system? I have a hard time believing they just let a kid hop from state to state all willy-nilly when they feel like it. But what do I know? I'm just a blogger, and a mediocre one at that.


Catching up with the author now as he leaves a gin soaked napkin on Cruella's coffin and extols her nefarious virtues. He says he's going to miss her, for all her sociopathic ways, because she helped shape him. "Someone had to die at the savior's hands," Gold reminds him. Emma is on the path to evil now and Gold couldn't be happier. And thank God, they got Emma an antihistamine. She's looking much better this episode.

Emma, meanwhile, isn't losing any sleep over tossing Cruella off a cliff (and neither are we, really - it was totally justified). She points out that we've all done things we regret - SNOW. We're all looking at you. No, really. Emma's looking right at her and Snow kinda looks like this:

Flashing back now, we see young Emma with her foster family in Minnesota and they seem pretty cool. They pray before dinner, they have a chore wheel and they're getting ready to take her on a camping trip along with their other kids. She heads out to the garage to find some gear, but what she finds is Lily, who is hiding out, begging Emma to conceal her. She's in big trouble, and she needs help.

Forward to Storybrooke, where Emma is decidedly unsettled to find out that she and Lily have been shadowing each other her whole life.

"Ain't fate a bitch," Regina remarks - I'll call that this episode's winning line, but Regina had some good zingers this time around.

"How is this possible?" Emma asks. Oh, come on. In this show? Are you kidding me?

Our actions are our own, but fate pushes us, Regina reminds her. Then she suggests a galpal roadtrip. Emma tells her she doesn't need a babysitter, and Regina replies with "Maybe I need you - how about it Swan?" And thousands of Swan Queen shippers sighed in ecstacy as hundreds of thousands of Captain Swan shippers grind their teeth because Regina called her "Swan."

Gold is fine with them leaving town. He thinks New York will turn Emma dark even faster. Something about the water, I guess. So they load up the Bug, because that's a far better choice than Regina's sedan for a five hour road trip.

"Let me just grab a superfluous magical artifact before we go!" Regina says, and she grabs the Apprentice's scroll, just in case they can't get back into Storybrooke even though they've both successfully left and come back on previous occasions.

And now it's time for our ninety seconds of Killian and Emma time, to appease the fans who are only still watching the show for this.(No, I'm not one of them, though there have been episodes where it felt that way). Killian cautions her to stay away from the darkness. She's got a lot to live for, and we finally hear Emma admit that he's one of those things.

I'll be right here, waiting, Swan, he reassures her. Doing what I always do since we still haven't hit second base.

Back we go to in time to Minnesota (aren't they supposed to talk like Fargo in Minnesota? These foster parents haven't said "Oh, you betcha" once). Young Lily has been discovered hiding in the garage, but she dreams up a cover story and the fosters invite her to dinner. She tells them that Emma was the first person to really understand her - cue the Dragon Swan shippers as young Emma gives her a doe-eyed look - but it doesn't last long, because somehow Emma recognizes Lily in news footage of a recent robbery.

Lily tells Emma she couldn't help but grab a gun and rob a store, no matter what she does, she just keeps making bad decisions. She begs Emma to go back to the house she was squatting in with her boyfriend and find the necklace she somehow came through a portal in a dragon egg with. Jeez. She gets a necklace. All Emma came through with was a baby blanket and a little boy who wasn't known for his sense of personal responsibility.

Off we go on the great road trip - first stop: Lowel, Massachusetts, where Lily used to live in a total craphole apartment. Her old landlord says she's dead and good riddance - she was a weird one and not the nicest person. Emma bodyslams the jerk just to show us how dark she's getting because they're not using red eyeliner this episode.

Back in Storybrooke, we learn that Belle is babysitting Neal. There has been a confirmed Neal sighting! What a relief.

Gold meanwhile, confronts the Knave, and lets him know that Belle's heart is no longer in her chest. He asks Will to retrieve it, and Will immediately agrees, despite his understandable distrust of The Dark One.

Back in the Bug, Regina chastises Emma about her bodyslamming and oh look! A wolf! We haven't seen one of those since season one! Emma runs off the road and the Bug gets a flat, so they head to a nearby diner to get coffee and wait for a repair. Surprise! Lily's a waitress and she's going by the name "Starla" now.

Emma confronts her, and Lily tells her she's got a husband and a daughter, and  her life is good now. Oh, and by the way, drop dead Emma. I don't even think about you anymore. But it turns out Lily made it up and now she's luring a small child to take her hand and walk around the block with her on the promise of a free burger. Well. That's not creepy.

Back in Storybrooke, Mal is holding her baby rattle when the Charmings show up begging forgiveness. Mal makes it clear that forgiveness ain't happening, and she doubts her kid will forgive them either. I'm with Mal. Screw with me all you'd like. Eff with my kid - you're dead to me.

Emma's superpower is actually working this episode, and she doesn't believe Lily's story. She breaks into Lily's apartment and they find a full-blown wall of crazy. Lily not only knows everything, but she's clearly looking for Emma and a way into Storybrooke to get her revenge on Snow and Charming. Lily steals the bug and takes off - and the apprentice's scroll is, of course, conveniently in the car, gaining her access to Storybrooke.

Flashback to Emma sneaking back into her foster home, but the parents are onto her. They're pissed, too, because Lily stole the vacation money and Emma was concealing a known criminal. Emma storms out of the house, and another foster family bites the dust.

Later, she gives Lily her necklace back. Lily lets her know that ever since she's met Emma, her life has circled the toilet bowl and it's been like her whole existence is darkness. When Emma's around, things are brighter - she begs Emma to stay with her and help her. Emma bails on her, of course, choosing to go it alone rather than hang with a sociopath. 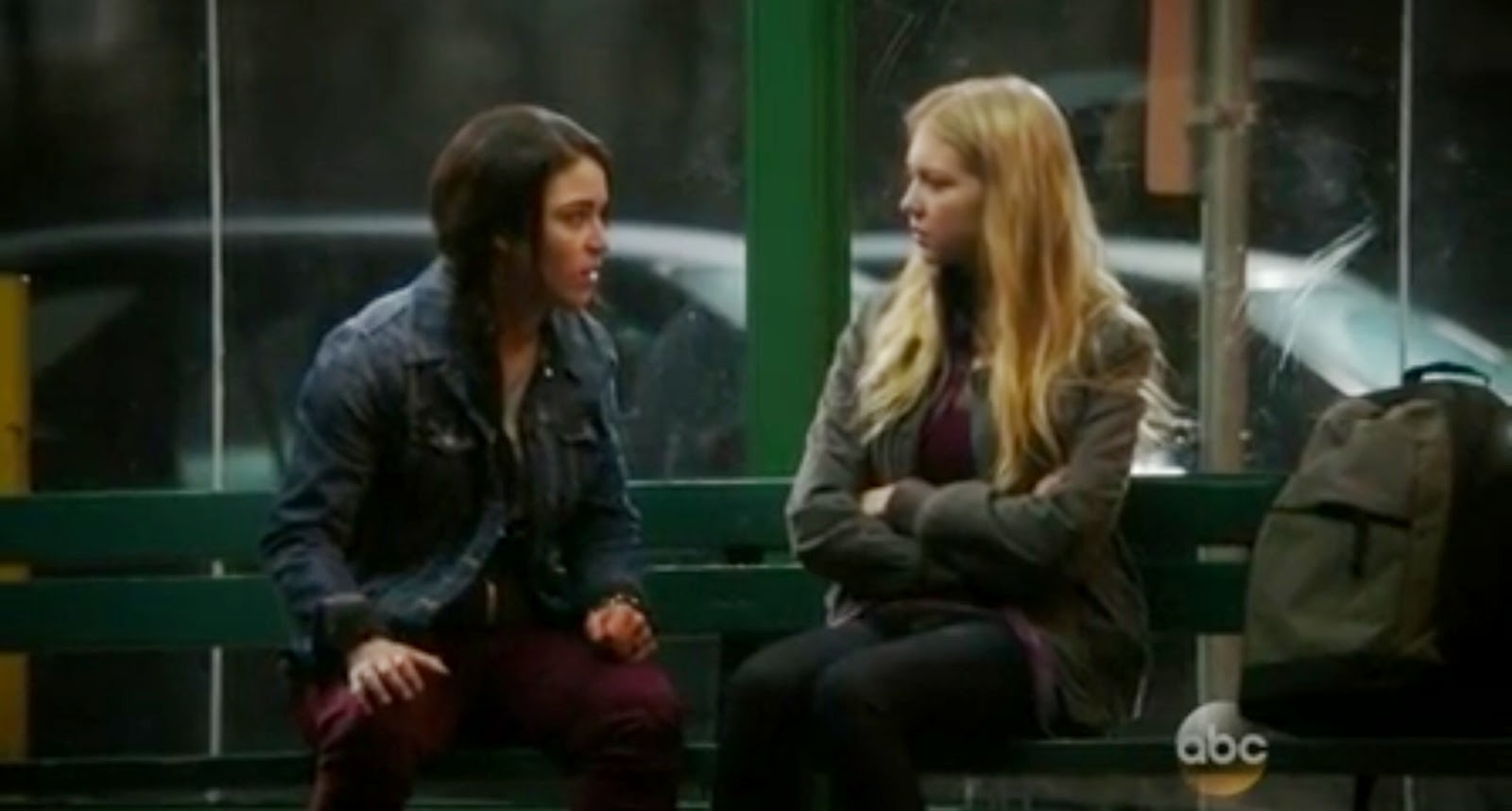 In Storybrooke, Mal tells Gold to piss into the wind when he comes after the heart, but he was only there to distract her so that the knave could grab it. He brings it back to Belle - and it turns out she has no memory of it being taken (most likely because Regina ordered her to forget all about it while she held the heart). Rumple returns Belle's heart to her chest, telling her that the Knave is now going to protect it, as he's proven unworthy.

And the Rumbelle shippers are clutching their chests in agony.


Meanwhile, Emma's pissed at Lily and Regina cautions her again about the dangers of going dark. A car chase ensues and Emma busts out her best Bourne moves and heads Lily off. Lily confesses that she learned everything and she wants the Charmings to suffer for what they've done. She vows to destroy them and Emma goes for her throat. They get into a fistfight that darkens the sky and blows out a headlight on the bug - hinting that there's magic to be had in the non-magical world when these two get together.

Emma pulls a gun and Lily goads her into pulling the trigger and ending her miserable existence. Regina reminds Emma that this is exactly what Gold wants.

"Emma...you're better than this," she says. Emma finally lowers the gun (and kudos to Jen Morrison - I really questioned whether or not she was going to lower that gun).

Now we flash back to young Lily, who's on a bus to somewhere after leaving Emma and she just so happens to be sitting next to...the apprentice. It turns out he's the one who fills her in on her sad, twisted fate, because he feels like he owes her the truth.

Forward to Emma and Lily who seem to be making up - Emma asks Lily if she'll come along with them -even though Lily has pretty much vowed to rid the earth of the Charmings - and Lily agrees to join them.

In New York, Regina and Robin reunite, and Robin is pretty freaked to learn that Marion is actually Zelena. Despite that, he can't leave because...Oh God, please don't let this be happening....Zelena is knocked up!!

Okay, I predicted Marian as Zelena. But I never saw this coming. This is straight up crazy. What. The. Hell.

I'm giving this one five ships out of five.

Despite the mere fleeting glimpse of my favorite ship, there were plenty of ships sailing and sinking all around. The lines were snappy and the tension and action were spot-on. And what a plot twist. I am still reeling.
By Ellie DeLano - April 27, 2015